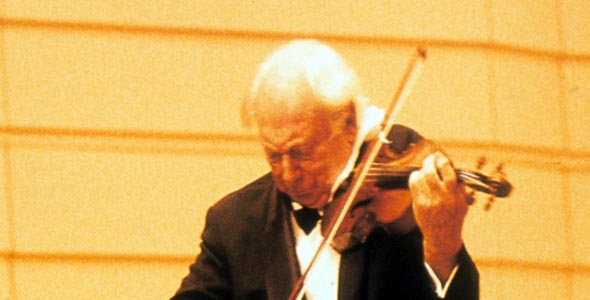 Virtuoso violinist Isaac Stern is one of the twentieth century’s most renowned, celebrated and recorded musicians. He is widely recognized as an influential teacher, emissary, speaker, and humanitarian. He toured for the U.S.O. in World War II, opened the Soviet Union to cultural exchange during the Cold War, and helped save Carnegie Hall from the wrecker’s ball in 1960. Involved in both the politics and culture of Israel since its establishment, Stern’s influence reaches far beyond America.

Isaac Stern was born in Kreminiecz, Russia in 1920. Fleeing the Russian civil war, his parents arrived in San Francisco only ten months later. At the age of eight he was taken out of school in order to focus exclusively on the violin. His talent was overwhelming, and by the age of fifteen he had his recital debut in San Francisco. By the time he was seventeen he had performed on the radio, and by the time he was twenty-two he had performed at Carnegie Hall to stellar reviews.

Within a short while, Stern’s talents had brought him the recognition of the American classical music world, which hailed him as one of its greats. Throughout the late 1940s and early 1950s, he toured the United States and Europe, cementing his place among the masters of the violin. Both his technical skill and the range of his performed work made him an influential figure among the small world of classical violinists, and a star among the greater listening public.

Known for his great political involvement, Stern was a defender of Carnegie Hall (and its president for more than thirty years) and a founding member of the National Endowment for the Arts. Along with Leonard Bernstein, he performed a memorial concert in Israel following the Six Days War. Like a number of his performances, this concert was made into a popular documentary— A JOURNEY TO JERUSALEM.

Though known around the world for his brilliant and insightful renditions of Mozart, Beethoven, and Hayden, he has long been a champion of the composers of his time. Among those whose works he premiered are Bernstein, Penderecki, Rochberg, and Hindemith. Well into his seventies, Stern continued to tour and speak internationally. In 1999 he published a book (written with Chiam Potok), entitled MY FIRST 79 YEARS, and has just recently finished recording the complete violin sonatas of Mozart in four volumes.

Whether in personal interactions with students and friends, in his heroic actions for the betterment of domestic culture or in his role as an international cultural ambassador, Isaac Stern has consistently used his remarkable talents and varied interest to the world’s advantage. In recognition of this he has received many of the nation’s and the world’s highest honors including Commandeur de la legion d’honneur by order of the President of the French Republic, The Order of the Rising Sun (Japan’s highest award), the Commander’s Cross of the Danish government’s order of Dannebrog, and the Presidential Medal of Freedom, awarded to him by President George Bush. 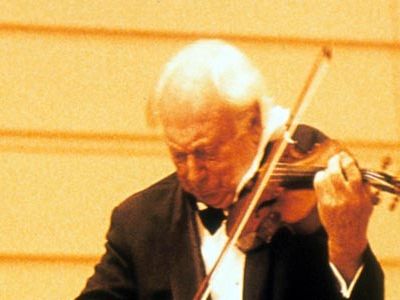 Jascha Heifetz: God's Fiddler - Full Film
Billie Holiday: The Long Night of Lady Day
Good Rockin' Tonight: The Legacy of Sun Records
Marvin Hamlisch: What He Did For Love
Lena Horne: In her Own Words
Judy Garland: By Myself