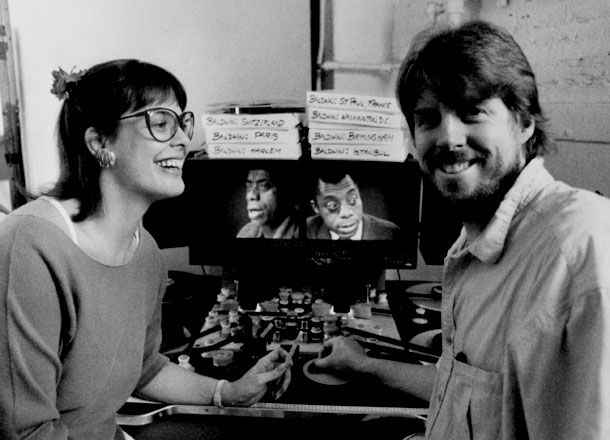 Co-Writers/Producers Karen Thorsen and Douglas K. Dempsey at work on James Baldwin: The Price of the Ticket. 16mm archival footage of Baldwin is threaded up on the Steenbeck editing machine at Maysles Films in NYC. Over 100 Separate pieces of archival material from nine different countries appear in the finished film. Photo Credit: Marcel Dumont. Copyright 1989, 2013 DKDmedia.

The feature-length 16mm documentary James Baldwin: The Price of the Ticket has received stellar reviews and awards.  Honored at festivals in over two-dozen countries – including Sundance, London, Berlin and Tokyo – BALDWIN was described as “Splendid” by Variety, “A video page-turner” by The San Francisco Chronicle, and “A haunting, beautifully made biography” by the Los Angeles Times.  “Stays with you after the program ends,” said the New York Times.

An emotional portrait, a social critique, and a passionate plea for human equality, James Baldwin: The Price of the Ticket is now considered a classic.  Without using narration, the film allows Baldwin to tell his own story:  exploring what it means to be born black, impoverished, gay and gifted – in a world that has yet to understand that “all men are brothers.”

Back in 1989, James Baldwin: The Price of the Ticket premiered on PBS/AMERICAN MASTERS.  Since then, repeated PBS broadcasts have reached millions of people.  The film has also been broadcast widely in Europe and Asia – and in 1998, an hour-long version was produced for French National Television.  Today, in honor of the 25th anniversary of James Baldwin’s death, the 50th anniversary of the March on Washington, and the 150th anniversary of the Emancipation Proclamation, PBS/American Masters will be broadcasting this documentary film classic on August 23rd, 2013.