Jimi Hendrix was one of the first artists to build his own recording studio. Electric Lady Studios, his state-of-the-art recording facility at 52 West 8th Street in Greenwich Village in New York City, was designed entirely to suit Hendrix, both in its technology and atmosphere.

In 1969, Jimi Hendrix and his manager Michael Jeffery bought the Generation, a club where Hendrix often jammed. Intending to build their own nightclub in the space, they hired John Storyk to design it after seeing his work in Life Magazine. Weighing in on their plans, Hendrix’s sound engineer Eddie Kramer said, “Are you crazy, you want to make a nightclub?” In Kramer’s opinion, Hendrix had been spending far too much money on recording studio time. He convinced Hendrix and Jeffrey to make the entire space Hendrix’s own recording studio.

“It was an innovation in that Jimi owned the studio … It was specifically built for him, with his vision in mind … It had to be a place where he felt comfortable as an artist,” says Kramer.

Electric Lady Studios not only matched Hendrix’s creative moods with elements such as a theatrical lighting system that could cast any color, but it was a “futuristic recording studio” according to John Hansen, an Electric Lady Studios engineer, with a huge control room and console.

“It was a great vibe for Jimi to work in,” says Kramer.

Jimi Hendrix hired John Storyk after admiring his work for the club Cerebrum in New York City. Hendrix provided Storyk directions for his club’s design, which had always planned for a control room in the back to record live sessions, but it was a small element. When Eddie Kramer convinced Hendrix to change the club into a recording studio, Storyk feared he was out of a commission. Instead, Hendrix and Kramer asked him to design Electric Lady Studios. Their plan to make the control room big and to make it an artist’s room represented the dawn of a new era for studios, according to Storyk. “Now every artist has their own studio.”

“I saw the quiet, shy, extremely polite Jimi,” says Storyk about the time he worked with Hendrix. “He was very low key but knew exactly what he wanted.” 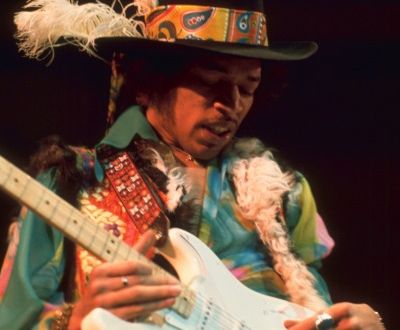