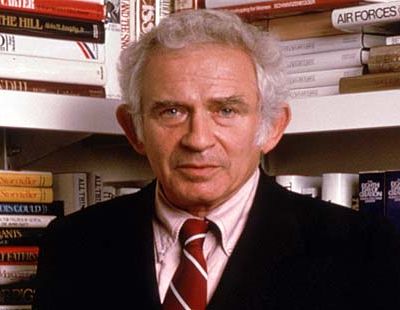 Norman Mailer
Writer
(Jan 31, 1923 - Nov 10, 2007)
KNOWN FOR
His prolific output of novels (The Naked and the Dead), nonfiction books, political reporting, and six marriages
QUOTE
"The final purpose of art is to intensify, even, if necessary, to exacerbate, the moral consciousness of people."
AMERICAN MASTERS FILM
Norman Mailer: Mailer on Mailer
(Oct 2000)
Directed by Christine Le Goff and Tamar Hacker

American Masters’ “Norman Mailer: Mailer on Mailer” is a co-production with Reciprocal Films and Films d’Ici in France. The program was originally produced for French television as three, one-hour programs and broadcast on successive nights. Below is a discussion between Tamar Hacker, Sr. Producer for the American Masters series, and Christine Le Goff of Films d’Ici about the nature of this international co-production, and the challenge of reversioning films for different audiences.

When Susan: Lacy, Executive Producer of American Masters first asked me to take a look at the original three-hour film I had no idea what to expect. I was familiar with Norman Mailer, and his reputation (which he acknowledges he earned) for being less than sympathetic to women’s issues. So I was prepared to reject a lot of his ideas. As soon as he came on camera, I was hooked. I was unprepared for how riveted I would be by his ideas and how strong a presence he is on camera. I had watched nearly two hours before he said something that caused me to rewind, so I could hear a statement again. At last! — I disagreed with something he said! — but I had to concede, he said it very well.

Christine Le Goff: The three hour film was taken from a much longer interview. Jean-Pierre Catherine and Michael Seiler, the authors of the film came to see Yves Jeanneau and I at Films d’Ici in Paris with a project about Mailer’s views on American post-war history, and we immediately liked the idea. It was unusual and provocative and very much the kind of filmmaking adventure we like to dive into.The recording of Mailer’s interview lasted a week. We began in Cape Cod and finished in Brooklyn in Norman’s home. We filmed over 20 hours of material, working each day from morning to night. This was a highly unusual experience. We had worked with Norman extensively before-hand to define themes and a structure to the film. So Norman was not only the subject of our film but its author and partner as well. Norman Mailer is considered in Europe as one of the most important American writers of the 20th century. He is a paradoxical writer and a man of opinion and action. Having access to him was an opportunity we couldn’t pass on. But we also knew that producing such a film would be difficult: not quite biography, nor history, the program was going to be – by choice- immensely subjective, something that is more accepted by European broadcasters than American ones, but still very hard to sell to any televisison. But France 2, France’s main public broadcaster, saw the potential for a TV event and became our first co-producer for a 3-part series “Mailer’s America”. With Richard Copans, the director, and with Norman Mailer, Jean-Pierre and Michael spent about a year preparing for the series, searching and organizing relationships between Mailer’s books, articles, and US historical events. The heart of the production was to be an extensive interview with Norman Mailer which would then be intercut with archival newreel footage as a counterpoint to Mailer’s stories and opinions. There would be no narrator, no other interviewees.

TH: The program as originally presented on French television was very strong, but it was produced with a different audience in mind. The original contained a lot of archival footage illustrating various events in the last fifty years of American history. There were long, uninterrupted clips of Vietnam war protests, and civil rights marches, etc. — a lot of material that American audiences have seen many times before about events we are all familiar with. While I can understand that it would be desirable to have this kind of extensive explanation of events for an audience outside the US, it did not seem necessary for a PBS audience. What we did want to include in the PBS version was more about Norman Mailer as a writer, how he approaches the process of writing, and his literary influences. While that hadn’t been the main thrust of the original interview, in the course of such an extensive interview with such a prolific writer, it certainly came up.

CL: We always knew we would have to revision the film for a US audience. Our series was first aimed at a European audience and as such needed to allow for some chronology of historical events which were not necessary for American understanding. We also knew that American Masters was a biographical series. Biography had not been the focus of our film. So the original authors, directors, producers and Norman Mailer himself, all agreed to help this reversionning process to its full extent. I have to admit that it was a first for us. Cutting down a film to fit international TV distribution is a process that we, as producers, are all confronted to at one point or another. But such an extensive reworking of the material is not common. Because I am French-born but have lived in America for the past 20 years, and go back and forth between France and the US to produces documentaries, we decided I was the ideal candidate to collaborate with the American Masters staff in this process as a bit of a go-between.

TH: There were two other versions of the program. One was made for Finnish television and was two-hours long, and the other was made by the BBC. Both of these versions were cut down from the original program. After looking at these two versions and discussing them with Susan we decided that in order to best serve our audience, we would go back to the original 20 hours of interview with Mr. Mailer, and craft a whole new program. The original film was called “Mailer’s America.” The original interview dealt to a great degree with Mr. Mailer’s political views — which are formidable. We knew that our version of the program would also put a lot of focus on his politics, but we also wanted to bring in as much biographical information and discussion about the writing process as possible. We liked the idea of scheduling the program shortly before the presidential elections. We had no idea at the time that the program would premiere right between the first presidential and vice presidential debates. Perfect timing.

CL: France 2 was our main partner. But we also had gotten the support of Nordic public TV (Finland, Denmark, Sweden), Belgium, Dutch, Canadian and Australian TV. From the onset, we felt strongly that film had to find its place on American public television. American Masters as one of its most prestigious series was our preferred home for a Norman Mailer special. So we came and met Susan Lacy, American Masters Executive Producer, very early on in the production. We spoke for the next 3 years to figure out how we could make this program part of the Series. We were aware our film was far from the usual format and we knew that Susan would be taking risks in producing it. And yet it felt right. When Susan Lacy finally called us to let us know she wanted to go ahead with it, we knew it would be hard work but it was well worth it! In deference to both Susan’s vision and courage, we wanted it to be the best program possible for her Series.

TH: I hadn’t met Christine before the day she arrived in the edit room. We’d spoken many time over the phone and had exchanged a great many emails, but I have to admit that I was a bit apprehensive about how she would feel about some of the changes we wanted to make. How receptive would she be? Christine was amazing. She carried all of the materials over from France with her (over 60 tapes, and a lot of paperwork). She was going back and forth to Paris — where she was shooting another program — the whole time. She is tireless! At the beginning we talked a lot about Mailer and what topics we definitely wanted to cover for the American audience. Beyond her intellect and now extensive knowledge of all things having to do with Norman Mailer, Christine had so much valuable information at her fingertips. She knew all of the research that had been done, and had brought a lot of these resources with her. She knew exactly where to find everything we needed, and was sympathetic to our desire to make changes. We really worked very well together. It was a true pleasure.

CL: I think that the apprehension was mutual! I had never worked with American Masters, so I didn’t quite know what to expect. My exact role had to be defined. I was both protective of the film we had spent three years making, but was also very open to the idea of revisiting it again in a new way. As a matter of fact I was even fascinated with looking at all the material again and shaping it once more. Tamar and I had spoken a number of times over the phone and exchanged thoughts while she was reading the transcripts. So I knew she was engrossed by what she read and more importantly that she had respect for Mailer’s ideas. During the original production, none of us had ever fully agreed with everything that Norman had to say on all the subjects we had covered. Norman is a catalyst and a provocateur as well as a great commentator and writer. We had immense respect for him, and we knew he had given us his respect and his trust. More than anything else I didn’t want to betray that trust. But the process turned out to be exhilarating, frustrating and fun all at once … very much as it had been the first time around. I was quite impressed at how quickly Tamar had mastered the 20 hours of material. We did work very well together, probably because she was so sympathetic and respectful of my feelings. My only regret … the lack of time pressure. The broadcast was set much earlier than anticipated. Perfect timing in terms of scheduling, but an immense pressure in the editing room. So the film has an interesting sense of lasting immediacy and urgency! This is something I like.

TH: There are many more stories and topics addressed in the original interview that didn’t find their way into either of the versions. This is always the heartache of any film. Our choices were partly based on keeping a throughline going in the program, creating a logical progression of time and ideas, and always integrating Mr. Mailer’s work. I think we ultimately accomplished this.