American Masters continues its 25th anniversary season with Pearl Jam Twenty, premiering nationally Friday, October 21 at 9 p.m. (ET/PT) on PBS (check local listings). Academy Award®-winning director and music journalist Cameron Crowe creates a definitive portrait of the seminal band carved from over 1,200 hours of rarely and never-before-seen footage, plus over 24 hours of recent band interviews and concert footage. The captivating, two-hour documentary gives viewers and fans an intimate first glimpse into Pearl Jam’s journey in honor of the band’s 20th anniversary. American Masters Pearl Jam Twenty is part of the first PBS Arts Fall Festival, a multi-platform event anchored by nine films that highlight artists and performances from around the country. The DVD is available for purchase on the online Shop PBS.

Told in big themes and bold colors with blistering sound, Pearl Jam Twenty chronicles the years leading up to the band’s formation, the chaos that ensued soon-after being catapulted into superstardom, their step back from the spotlight with the instinct of self-preservation, and the creation of a trusted circle that would surround them — giving way to a work culture that would sustain them. Part concert film, part insider hang, part testimonial to the power of music and uncompromising artists, the film celebrates the freedom that allows Pearl Jam to make music without losing themselves, their fans, or the music lovers they’ve always been. Pearl Jam Twenty features new interviews with original band members Jeff Ament, Stone Gossard, Mike McCready, and Eddie Vedder, drummer Matt Cameron, and friend and Soundgarden singer/guitarist Chris Cornell, as well as archival performance and interview footage of Mother Love Bone, Pearl Jam, Temple of the Dog, Kurt Cobain, and Neil Young.

Complex and relevant after two decades, Pearl Jam remains a giant musical force and one of the biggest and most magnetic touring acts in the world. With over 60 million albums sold worldwide, they continue to create and perform all on their own terms. Known for their passionate expression, intense and philosophical lyrics, and amazing relationship with fans, Pearl Jam is not known for their media or personal exposure, making the revelations in Pearl Jam Twenty all the more special.

“When I set out to make this film, my mission was to assemble the best-of-the-best from Pearl Jam’s past and present and give audiences a visceral feeling of what it is to love music and to feel it deeply — to be inside the journey of a band that has carved their own path,” says Cameron Crowe. “There is only one band of their generation for which a film like this could even be made, and I’m honored to be the one given the opportunity to make it.”

Crowe was among the band’s inner circle when they formed and has maintained a close friendship with the band since his days as a reporter for Rolling Stone in Seattle. Almost 20 years after the band’s inception, Eddie, Jeff, Stone, and Mike gave their longtime friend the okay to raid the vault and assemble the story no one but those closest to them ever knew. Audiences will become intimate with the Seattle musicians whose sound and social consciousness were revolutionary — Pearl Jam stood up to both the prevailing social politic and the oppressive music industry.

“We are delighted to be presenting Pearl Jam’s 20th on American Masters’ 25th — a truly perfect anniversary celebration. We continue the tradition of matching world-class filmmakers with subjects like this band, who revolutionized our culture with their music and their exemplary social consciousness,” says Susan Lacy, series creator and executive producer of American Masters, a seven-time winner of the Emmy® Award for Outstanding Primetime Non-Fiction Series. The series is a production of THIRTEEN for WNET New York Public Media. WNET is the parent company of THIRTEEN and WLIW21, New York’s public television stations. For nearly 50 years, WNET has been producing and broadcasting national and local documentary and other programs to the New York community.

As part of their year-long “PJ20” celebration, Pearl Jam will release the Pearl Jam Twenty soundtrack and book in September. The soundtrack from Columbia Records/Sony Music is comprised of tracks selected by Cameron Crowe, making the album a true companion piece to the film. Published by Simon & Schuster in the U.S. and Atlantic Books in the UK, Australia, New Zealand, and South Africa, the book is an aesthetically stunning chronicle of Pearl Jam’s past two decades, compiled and written by veteran music writer Jonathan Cohen with Mark Wilkerson, and featuring a foreword by Cameron Crowe and material from all his own band interviews. Also this September: Pearl Jam’s Alpine Valley Labor Day anniversary weekend concert and 10-date Canadian tour, followed by the film’s theatrical release. The DVD will be available in October after the PBS broadcast premiere.

American Masters is made possible by the support of the National Endowment for the Arts and by the Corporation for Public Broadcasting. Additional funding for American Masters is provided by Rosalind P. Walter, The Blanche & Irving Laurie Foundation, Rolf and Elizabeth Rosenthal, Cheryl and Philip Milstein Family, Jack Rudin, The André and Elizabeth Kertész Foundation, Michael & Helen Schaffer Foundation, and public television viewers. This PBS Arts Fall Festival presentation is in collaboration with PBS member station KCTS. Funding for the launch of PBS Arts has been provided by Anne Ray Charitable Trust, public television viewers and PBS. 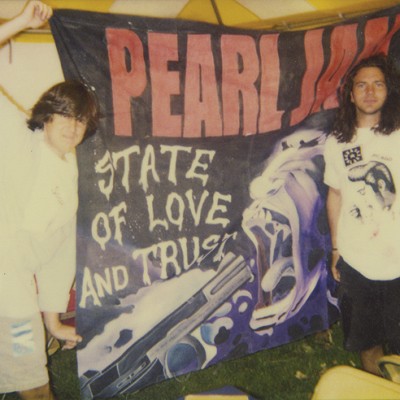 Pearl Jam
Band
VIEW MASTER COLLECTION
QUOTE
"We’ve always been a band that stood up for what we thought was right."
— Jeff Ament

Satchmo: The Life of Louis Armstrong
Jimi Hendrix: Hear My Train A Comin'
Leonard Bernstein: Reaching for the Note
Yehudi Menuhin: A Family Portrait
Sweet Honey in The Rock: Raise Your Voice
The Boomer List