Plácido Domingo is one of the most loved and listened to opera singers of the 20th- century. He was born in 1941, into a musical family in the Barrio de Salamanca section of Madrid. His parents were both singers, and when he was five they moved to Mexico with a travelLing musical company. Within a few years they had formed their own group and often brought Plácido in to sing when there was a need for a child. Plácido began to study piano, first privately and later at the conservatory. Singing with his family in productions such as “My Fair Lady” and “The Merry Widow”, he began to prepare for greater roles.

In 1959, he auditioned for the Mexican National Opera. Though he auditioned as a baritone, he was accepted as a tenor. His first performance at the National Opera was as Borsa in Verdi’s “Rigoletto”. Working a number of side jobs, including piano player for a ballet company, Domingo continued to appear in operas in Mexico City. In 1961, he made his American debut with the Dallas Civic Orchestra. He played Arturo in Donizetti’s “Lucia di Lammermool”, and a year later returned to play Edgardo in the same opera. In 1962, he married Marta Ornelas, an opera singer whom he had known from the conservatory. That year they moved to Tel Aviv, where they were engaged by the Hebrew National Opera.

Over the two and a half years they remained in Tel Aviv, Domingo had the opportunity to hone his skills and broaden his repertoire. There he worked with international performers singing in many languages. Though he had spent his entire life on the stage, Tel Aviv was his first extended and public proving ground. In 1965 Domingo left Israel to sing with the New York City Opera. Though Marta had been voted Mexican Singer of the Year in 1962, she gave up her career to care for her husband and their growing family.

Domingo’s American debut occurred in 1965 when he was asked to fill in at the last minute for a tenor in “Madame Butterfly”. Throughout the sixties he continued to sing in New York, and in 1968 had his official Met debut in Ciléa’s “Adrianna Lecouveur”. The following year he performed in Ginastera’s “Don Rodrigo”, and in 1971 played Cavaradossi in Puccini’s “Tosca”. He has performed this role more than any other and is considered one of its great interpreters. Though his repertoire is primarily composed of the French and Italian masters of the nineteenth century, he has a wonderful range, which includes Mozart and Wagner.

By the mid-1970s, Plácido Domingo was internationally recognized as one of the greatest living tenors. His good looks and charismatic character have made him one of the most popular performers in any genre. In 1981 he hit a new peak of popularity when he teamed up with John Denver to put out an album of duets. Though critics were skeptical, PERHAPS LOVE went gold and brought opera further into public consciousness. It was not, however, until almost ten years later that Domingo would hit the peak of his fame.

Teaming up with José Carreras and Luciano Pavarotti, he formed The Three Tenors. The Three Tenors performed their first concert in a celebration for the 1990 World Cup Championship in Rome. The concert was a tour de force and an immediate international success. They continued to tour, and four years later performed in Los Angeles with 1.3 billion people watching on television. Throughout the years, Domingo has used his popularity to support a number of causes, including relief for victims of the 1985 earthquake in Mexico.

Considered one of the most talented and hardest working musicians of our time, Plácido Domingo remains at the center of the international opera world. In the eighties he appeared in a number of film productions, including Verdi’s “La Traviata”, directed by Franco Zeffirelli. While continuing to perform in dozens of operas and concerts every year, Domingo has cultivated a serious career as a conductor as well. In 1996 he became the artistic director of the Washington Opera House, while at the same time touring with the Three Tenors. More than nearly any other performer, Plácido Domingo has earned the respect and love of opera listeners throughout the world. 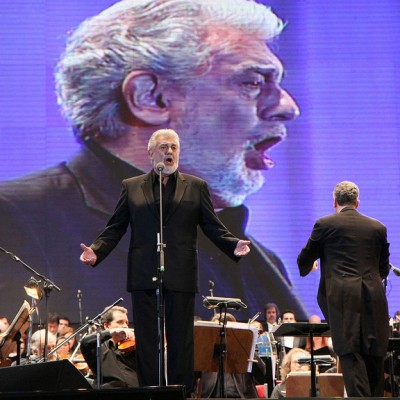