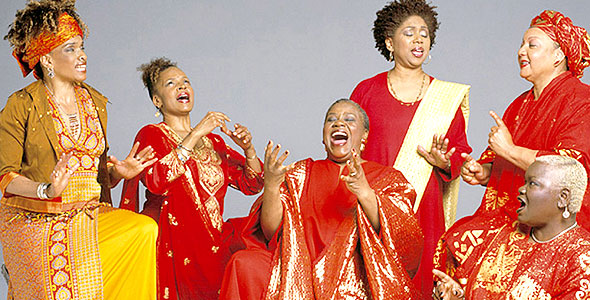 Emmy Award-winning Director Stanley Nelson and his film crew went on the road with Sweet Honey In The Rock during their 30th anniversary tour, filming concerts and conducting interviews in New York, New Jersey, Iowa, Nebraska, Kansas, Washington D.C., Los Angeles, and Seattle. Nelson answers some questions about his experiences with the renowned singing group.

Q: What makes Sweet Honey In The Rock such a good subject for a documentary?

A: They have a long history of making powerful, beautiful music. Their music is about issues that we are all concerned with. They are also a very visual group on stage, and for us the question was – how do you keep together a group for 30 years? We wanted to know what goes on behind the scenes and the story that comes out of it. That’s what makes for a fascinating documentary.

Q: Why do you think their music has survived, and thrived, for so many years?

A: They are an incredible group and what they do is unique. In a lot of ways, Bernice {Johnson Reagon} held them together by her sheer will and kept them going – but they were on a mission. They structured themselves to last – they have a touring schedule that basically has them touring only on the weekends. And they don’t tour all the time. They are careful when replacing new members. It all helps keep them together. Also, they’re singing songs with a message – not just pretty music. The group is united by their message. They’ve had 23 different members over the 30 years but Bernice was always there. It was her will that kept them together.

Q: You’ve made a number of very diverse films. How did this experience differ from others?

A: This film was entirely different – we had never made a film about music. It’s entirely different working with artists and telling a story through music. We didn’t want it to be a “concert film,” but we did want a concert film. We wanted to include a lot of live footage – we wanted pristine sound and camera work, but we also wanted to include a behind-the-scenes look at their lives and how they put together a show, go on the road and how to meld those two things together. We wanted to make sure that we were also telling a story – not just one song after another.

Q: What was the most challenging aspect of filming a musical group – live?

A: It was all challenging. We were filming a group that is basically five voices and a sign language interpreter sitting on an empty stage. There’s not a lot of histrionics. Nobody’s diving into an audience or kicking their drums over. I’d seen them a number of times, and they always make that experience exciting. How do you convey that same kind of excitement and power to an audience on film that you get from a live show? That was the real challenge for us.

Q: Bernice decided to leave the group during filming, which made for a naturally dramatic – and unexpected – ending. Please expand.

A: For us, we went in knowing it was their 30th year. We were fascinated by their music. In the middle of production, Bernice announced to the group that she was retiring. Because Bernice was the only one there all these years – she was the glue. The group had to make a decision to continue or not to continue without Bernice. The question became, how then would they continue? Auditioning new members to replace Bernice was dramatic. We were able to capture all that on film. 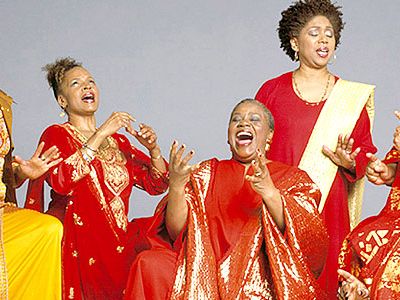 About Sweet Honey in the Rock
Timeline