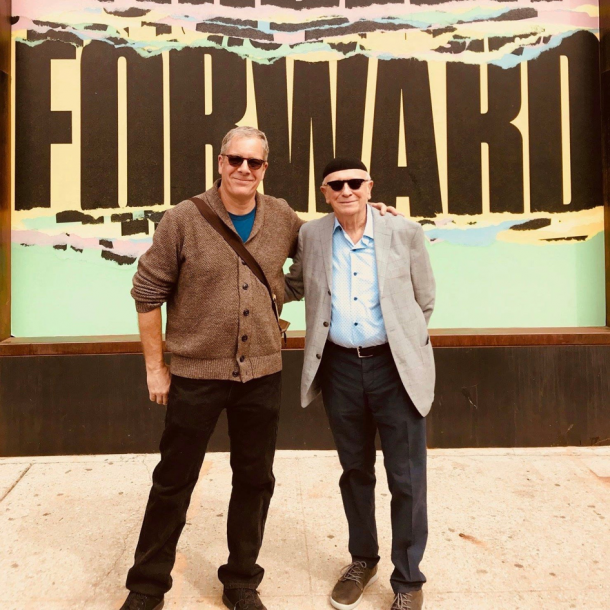 In Every Act of Life, Terrence McNally says, “The need to connect that my characters feel is everything in my work.” Terrence and I come out of very different backgrounds and experiences, but we’ve both seen that the real-life power of connection can rival anything on stage.

Terrence was born in Florida, grew up in Texas, and fled to New York City in 1955.

I was born in Minnesota, grew up in Washington State, and fled to New York City two decades after Terrence.

At 19, I got a job as a messenger at The New Yorker, delivered packages to S.J. Perlman, Saul Steinberg, Charles Addams, Lillian Ross, (among others) and finally sold the magazine a few of my own cartoons. However, the defining moments in our lives often aren’t the goals we set for ourselves, but things that happen along the way. When I was a kid, I fell in love with old movies and discovered the films of Howard Hawks, John Ford, and Preston Sturges . . . I’ll still watch His Girl Friday every time it’s on TV. When I worked at The New Yorker, I always volunteered to carry the bags of film critic Pauline Kael when she walked from her hotel to Grand Central Station. I was kind of a bumpkin, but she befriended me, recommended favorite movies (The Shop Around the Corner), invited me up to her book-filled home in Great Barrington, and gave me my first real sense of the transformative power of the arts. Much as John Steinbeck inspired Terrence, Pauline impressed me with her passionate (sometimes contentious) interest in film, music, history, art, politics – for her, it all wove together. That set me on the somewhat zigzagging direction of my life.

Later, I did book review illustrations for The Los Angeles Times and The New York Times, wrote and illustrated several children’s books, wrote for magazines and newspapers, exhibited my paintings in several galleries, and hosted daily talk radio programs in Vermont and Los Angeles. I finally jumped from radio to working on nonfiction TV, and then slid, pushed, and wangled my way into directing, producing, and writing feature documentaries.

First on my own, and then with my producing partner Marcia Ross, I’ve done documentaries about: swing jazz and dance in 1930s Harlem and the discovery of Ella Fitzgerald, the persecution of the Baha’i Faith in Iran, the pioneering Los Angeles artist Edward Biberman, a courageous priest and champion of women’s rights in Haiti, and the three women who helped launch the national marriage equality movement. The subjects may seem quite different, but they’re all about visionary people with a sense of community and public purpose.

It was during our marriage equality film, The State of Marriage, that Marcia and I shot a short sequence with Terrence and his husband, theatre producer Tom Kirdahy. They shared their story of getting a Civil Union in Vermont, which at the time was as close to marriage as possible for same-sex couples. It was really moving to hear one of America’s greatest and most influential writers speak so openly about love, need, trust, commitment, being true to oneself, and the importance of making life matter. We thought, “Why hasn’t anyone made a documentary about this man?” A few months later we floated the idea to Terrence and Tom, they said yes, and that’s what started Every Act of Life.

Marcia began her career in the theatre, then worked as a casting director and executive on dozens of films and television series, including Clueless, Ten Things I Hate About You, The Princess Diaries, Romy and Michele’s High School Reunion, and thirtysomething. We were both divorced when we started seeing each other, and after a few years, we decided to work together, as well. Midway through filming Every Act of Life, Marcia and I got married. The power of connection that Terrence believes in has certainly affected our lives.

Terrence says in Every Act of Life, “Speaking in your own voice, realizing who you are, is a complicated process . . . When people aren’t willing to look at the truth about who they are, I think it’s going to corrode their souls, their hearts.” That call for honesty and openness is what makes his plays so universal and lasting, and it’s a big part of what makes me want to tell his story, and others. Marcia and I are now in post-production on a documentary about one of the world’s most courageous human rights activists and political prisoners.

American Masters – Terrence McNally: Every Act of Life is available for 7 days only starting March 25th at pbs.org/americanmasters and the PBS Video app in honor of the playwright, who died March 24th.

SHARE
STREAM WITH PASSPORT
Terrence McNally: Every Act of Life
About the Master