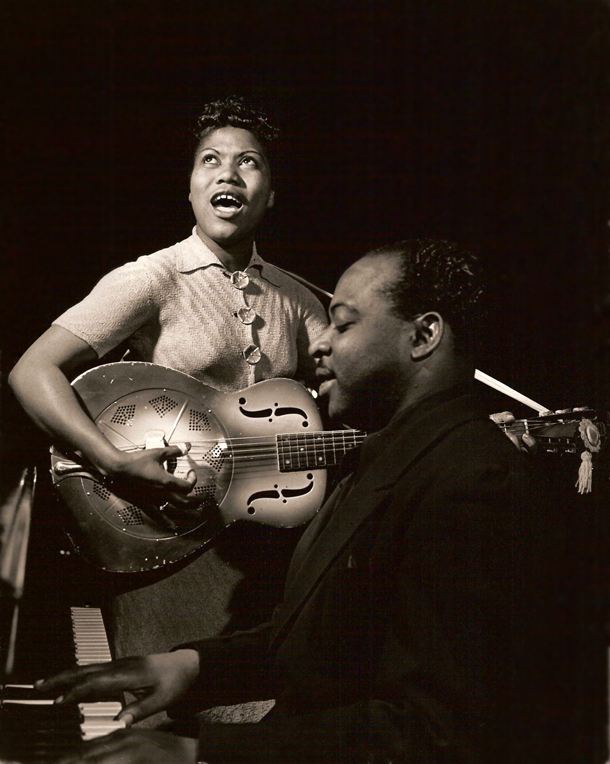 The life and times of Sister Rosetta Tharpe

1921 – A 6-year-old Rosabell Atkins makes her debut solo appearance at Fortieth Street Church of God in Christ in Chicago.

1920s-30s – Rosabell and her mother, Katie Bell, evangelize for the Church of God in Christ. Katie Bell preaches and her daughter plays guitar and sings. They appear at the Maxwell Street market in Chicago as well as at churches, tabernacles, and revivals throughout the South.

1936-37 – Rosetta Tharpe and her husband are a popular act in southern Florida, especially at Miami Temple COGIC, where radio earns her local celebrity.

1938 – “Sister Rosetta Tharpe” joins the cast of the fall 1938 Cotton Club Revue, which headlines Cab Calloway and the Nicholas Brothers dancers. She is an instant hit. Rosetta poses for photographer James J. Kriegsmann. The images of a smiling Pentecostal musician playing her guitar set the tone for future images, which almost always feature Rosetta with her instrument. Mills Music publishes Eighteen Original Negro Spirituals, a collection of songs and arrangements attributed to Rosetta Tharpe. The collection includes “This Train,” “My Lord and I,” “That’s All,” and “I Look Down the Road and I Wonder,” all songs she will subsequently record for Decca Records and perform regularly throughout her career. Rosetta records her first Decca sides, including “Rock Me,” a version of Thomas A. ’Dorsey’s “Hide Me in Thy Bosom.” Rosetta plays notable NYC concerts. In addition to John Hammond’s From Spirituals to Swing at Carnegie Hall, she plays the Paramount with Count Basie, and appears at Harlem’s Apollo Theater. The Apollo gig is a first for a gospel soloist.

1941 – Rosetta signs a contract to sing with the Lucky Millinder Orchestra, a popular swing band. They travel widely, and she scores hits with songs like “The Lonesome Road” and the distinctly secular “(I Want a) Tall Skinny Papa.” She and Katie Bell Nubin befriend Dizzy Gillespie when the jazz trumpeter briefly works for Millinder’s band.

1942 – During the war years, Rosetta records V-disks for U.S. troops and appears on Jubilee, a variety show targeting African American servicemen and women.

1943 – Rosetta breaks with Lucky Millinder and sets out on a solo career. That same year, she divorces Thomas Tharpe and marries Foch P. Allen.

1944 – Rosetta begins a productive recording relationship with Sammy Price, leader of Decca’s house band. They release “Strange Things Happening Every Day,” which climbs to number two on the “race” chart. The song has a second life in the 1950s, when Memphis deejay Dewey Phillips promotes it.

1946 – Rosetta appears at Nashville’s Ryman Auditorium, home of the Grand Ole Opry, with the Fairfield Four. In the spring, she attends a Harlem concert where she hears a young gospel singer from Newark, Marie Knight. Rosetta subsequently convinces Marie to join her act and they eventually become both performing and romantic partners (Rosetta had relationships with both men and women throughout her life). The pairing will prove a boon to Rosetta’s career.

1947 – Rosetta obtains a divorce from Foch Allen after testifying against him in a Nevada court.

1948 – “Up Above My Head,” a duet with the Sam Price Trio, reaches number six on the “race” chart. “Beams of Heaven” is popular among gospel fans. Rosetta purchases a house in Barton Heights, a middle-class neighborhood in Richmond, Virginia. Mahalia Jackson releases her monumental hit “Move On Up a Little Higher,” a song that catapults her to national stardom.

1949 – Decca Records has Rosetta record a “copycat” version of Jackson’s hit song. Rosetta forms the Rosettes, a back-up group of five singers from Richmond. Together they record a hit version of “White Christmas,” which reaches number six on the new “R&B Hit Singles” chart. They tour nationally with arranger-pianist James Roots, Jr., traveling to gigs on Rosetta’s own tour bus.

1950 – On January 1, Rosetta appears with the Rosettes on the Perry Como Supper Club show. It is her first national TV appearance.

1951 – Marie Knight and Rosetta Tharpe go their separate ways professionally, although Marie appears as a bridesmaid at Rosetta’s third wedding, to Russell Morrison. Staged at Griffith Stadium in Washington, DC, as a joint wedding-concert, the event attracts upwards of 20,000 paying fans, who cheer as bride plays electric guitar from center field.

1952 – Rosetta records a duet in Nashville with white country music star Red Foley. “Have a Little Talk with Jesus” fades into obscurity, but the collaboration is historic.

1954 – Encouraged by Decca producers, Rosetta reaches out to a burgeoning R&B audience with standard secular fare. The new songs alienate her gospel fans and never capture a share of the new “youth” market. Rosetta meets her half-brothers and -sisters from her late father, Willis Atkins. She befriends the extended Atkins clan of Camden, Arkansas.

1955 – Rosetta and Marie, reunited, play several New York jazz clubs, where they are warmly received by jazz critics. Rosetta turns forty. Emmett Till, a fourteen-year-old black boy from Chicago, is murdered by white men while visiting relatives in Mississippi. His mother, Mamie Till, a member of Rosetta’s old Chicago COGIC congregation, displays his brutalized body at an open-casket funeral to thousands of anguished and angry mourners. Elvis Presley, a white teenager from Mississippi, raised on gospel music, releases “That’s All Right.”

1957 – After defaulting on the mortgage, Rosetta loses her Richmond home. Later that year, she and her husband-manager Russell travel to England, taking advantage of interest in U.S. musicians fueled by the British blues revival. During a concert tour sponsored by the Chris Barber Band, Rosetta is given celebrity treatment and hailed as a proto-rock and roller by delighted fans and critics.

1958-60 – European tours. Rosetta is greeted warmly in Great Britain, France, Germany, Spain, and Scandinavia, where she tours with the Diz Disley band, featuring the young English drummer Ginger Baker, who would later be part of the British Invasion band Cream.

1960-1962 – Rosetta and Russell purchase a house in Philadelphia in 1960. She records two albums for Verve, Sister on Tour and The Gospel Truth. Katie Bell Nubin does her first and only LP, Soul, Soul Searching, with backup provided by a band led by Dizzy Gillespie.

1964 – British tour with the American Folk, Blues, and Gospel Caravan organized by U.S. promoter George Wein. The lineup includes Muddy Waters, Chess pianist Otis Spann, and the duo Sonny Terry and Brownie McGhee. Blues and Gospel Train, a specially produced show based on the caravan, appears on British TV. That same year, Rosetta appears at the Newport Jazz Festival, on a program that reunites her with Count Basie.

1964-65 – Rosetta makes two guest-host appearances on TV Gospel Time, performing dazzling versions of “Up Above My Head” and “Down By the Riverside.”

1967 – Katie Bell Nubin and her daughter appear at the Newport Folk Festival, where Rosetta takes the stage in mink. That same year, she tours extensively abroad: in France, Germany, Scandinavia, Spain, Denmark, the Netherlands, and Great Britain.

1970 – Rosetta falls ill, probably with a stroke, in Switzerland, during a date with the American Folk, Blues and Gospel Festival, and has to leave the tour to return to Philadelphia.

1971 – Rosetta undergoes amputation of a leg due to complications from diabetes. Later in the year she performs at Gates of Prayer Church in New York, along with prominent congregant Marie Knight. They rock the little church with “Didn’t It Rain” and “Precious Memories.”

1973 – Rosetta suffers a stroke and dies at Temple University Hospital in Philadelphia, on October 9. She had been scheduled to record a new album with Savoy. At her funeral, at Bright Hope Baptist Church, Marion Williams sings “Precious Lord” and Marie Knight sings “Peace in the Valley.” Rosetta is laid to rest in Philadelphia, in an unmarked grave.

2007 – Gayle Wald publishes Shout, Sister, Shout: The Untold Story of Rock-and-Roll Trailblazer Sister Rosetta Tharpe. It is the first full-length work about Rosetta Tharpe, based on interviews as well as archival documents.

2008 – After a campaign led by Bob Merz, a Philadelphia fan, the Governor of Pennsylvania declares January 11 Sister Rosetta Tharpe Day. That evening, a benefit concert is held at Philadelphia’s Keswick Theater to support the purchase of a marker for Rosetta’s gravesite. The concert features the Dixie Hummingbirds, Odetta, Marie Knight, Willa Ward, the Johnny Thompson Singers, and the Huff Singers. The governor’s declaration is read from the stage.

2009 – A grave marker, with text provided by Rosetta’s old Baltimore friend Roxie Moore, is installed at Rosetta’s gravesite at Northwood Cemetery. In addition to funds from the benefit concert, private donations and money from the Rhythm and Blues Foundation supported its purchase.

2011 – A historical marker is installed in front of Rosetta house on Master Street in Philadelphia. A celebration accompanies its unveiling. 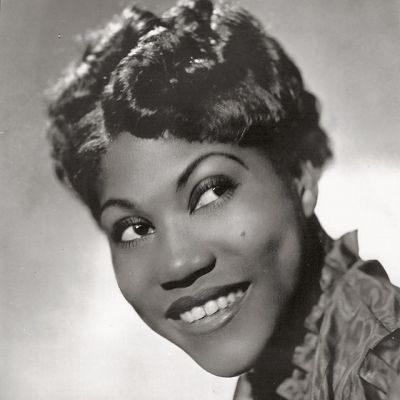