The Recording Academy honored a distinguished group of musicians with its Lifetime Achievement Award in January, including Sister Rosetta Tharpe, a black queer woman widely considered to be the “godmother” of rock ‘n’ roll.

Tharpe was an influence on countless musicians, including Elvis Presley, who was inspired by her early in his career. “It’s not an image I think we’re used to thinking about when we think about rock ‘n’ roll history. We don’t think about the black woman behind the young white man,” said biographer Gayle Wald in a 2013 American Masters film about Tharpe. She was also an influence on countless other musicians including Little Richard, Chuck Berry, Jerry Lee Lewis, and Bob Dylan. 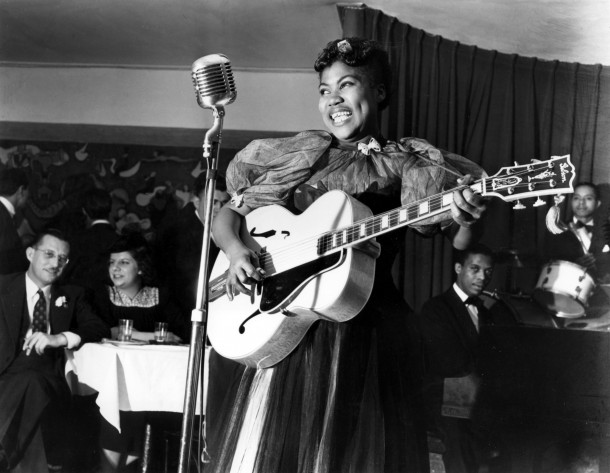 This musical clip from the American Masters film features Tharpe perform at an abandoned railroad station in 1964 England. Tharpe, dressed in a sparkly overcoat, pulls up to the make-shift stage on a horse–drawn carriage as the band plays to her entrance. You can almost hear a train whistle blow when she belts “Didn’t it Rain” accompanied by a full-blooded, swaggering electric guitar.

Want to learn more about Sister Rosetta? Check out a biographical timeline, which includes information about her friendship with iconic jazz trumpeter Dizzy Gillespie, her romantic relationships with both men and women, and the time she played guitar at her own wedding in front of 20,000 paying fans. And introduce yourself to the music of Sister Rosetta with the playlist below.