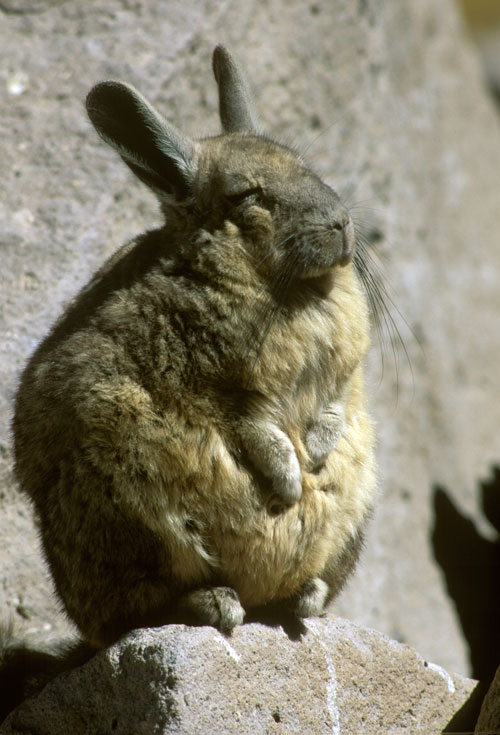 The salt basins of the Atacama Desert in the high Andes are formidable places to call home. Located in a desert atop a high-altitude plateau in the middle of a lofty white-capped Andean cordillera of volcanoes and mountains, these austere basins are among the most extreme habitats on Earth. Once covered by water, the salt basins, or salt flats, are now arid landscapes of salt-covered soil. The blindingly white patina of this world may be inviting to the photographer’s lens, but not to most living organisms. Those who have come to live in such an unwelcoming habitat have been compelled to evolve a set of fascinating, specialized adaptations.

One organism equipped to survive in a place of such extreme temperatures, dry climate and high salinity is a plant called the saltbush. Saltbush belongs to a salt-tolerant family of plants called the halophytic chenopods. The salt concentrations in the stems and leaves of chenopods are many times what they are in seawater. Theses salts keep precious fluids in the plants’ cells from being drawn by osmotic pressure into the salty soil. As the water in their cells evaporates, the plants must, nonetheless, prevent their internal salt concentrations from getting too high. Many halophytes compensate for evaporation by depositing salt crystals on the surfaces of their leaves, giving the leaves a grayish silver cast. Very few mammals can process the high concentrations of salts in the saltbush’s leaves, and this gives it a chance of survival.

One species of viscacha, the golden viscacha rat, has a particular taste for saltbush and a specialized adaptation for consuming it. This rodent is an extremely rare species, occurring over less than ten square miles of salt desert. That gives it one of the most restricted habitats of any mammal. Viscachas make their homes in mounds largely formed through soil erosion and deposition. The mounds offer the rodents protection from the floodwaters that arise each summer, when monsoon-like rains and runoff water from the surrounding mountains inundate the parched salt flats. The viscacha, which is related to the chinchilla, has upper incisors and chisel-shaped lower incisors. But it’s an extra pair of upper incisors that enables the viscacha to consume saltbush. These extra “teeth” are actually stiffened bristles of hair gathered into bundles. With three sets of incisors, the viscacha can easily strip the salt from the saltbush leaves, which it then eats. The viscacha rat also has kidneys that produce urine high in salt content, enabling it to excrete most of the salt it consumes in its diet.

Among the high Andes, where winter nights can fall to minus 20 degrees F, live animals that are most often associated with palm trees and pink sand. A salt flat surrounded by the Andes may seem an unlikely place for flamingos to flock, but the Altiplano lakes are actually typical of flamingo habitats around the world — shallow, alkaline or saline lakes. Flamingos ward off the cold by crowding into open water near the hot springs among the Altiplano. Though their legs are virtually resistant to caustic substances present in the volcanic waters, they must be careful to rinse off in freshwater regularly. What makes it worth the risk and effort, is that, within the lagoons of bright red minerals and caustic waters, is a flamingo feast of diatoms, algae and aquatic invertebrates, such as brine shrimp.

Each of the three species of flamingo inhabiting Altiplano salt flats has its own food supply and so they can coexist without the threat of competition. James and Andean flamingos feed entirely on tiny diatoms that are about 0.6 and 0.8 millimeters in length, respectively. The Chilean flamingo favors brine shrimp, copepods, fly larvae and other small invertebrates.

The key to the flamingo diet is its extraordinary bill. As the bird feeds, its bill is held topside-down, pointing backward and slightly ajar, using a plunger-like tongue to suck in water, mud and food items up to a certain size . The flamingo closes its mouth as its tongue forces the water out through a special filtration system in the beak. This built-in filtration system enables the flamingo to take in nutritious food items while filtering our harmful, caustic substances like sodium hydroxide. Both the upper and lower mandibles contain two rows of horny, baleen-like strainers called lamellae. When they come together, the lamellae of the upper and lower mandibles mesh and filter out particles that then adhere to the tongue. These particles are swallowed as the tongue moves to the back of the mouth again. A flamingo’s large, fleshy tongue is covered with bristle-like projections that help filter water and food particles through the lamellae.

Though they are surrounded by salt, flamingos cannot drink salt water and must be careful not to swallow too much of it with their food. They drink fresh water from springs or puddles, and can even drink rainwater from their waterproof feathers. Flamingos, like petrels and other seabirds, have special glands in their nostrils that can excrete excess salt from their bodies.

But flamingos don’t come here just for food. The salt flats of the Andes Mountains provide an essential ingredient for survival-isolation. In such an inhospitable and inaccessible habitat most predators or competing birds dare not try to eke out a living.

Brine shrimp, a key component of the Chilean flamingo’s diet is an astoundingly well-adapted organism in its own right. Called extremophiles, these invertebrates are most successful in habitats like salt flats, achieving high population sizes and tolerating large environmental variation. Brine shrimp have evolved the most efficient osmoregulatory system in the animal kingdom, allowing it to control the concentration of dissolved substances like salts inside its body different independently from the concentration in its surroundings. And as an adaptive response to environmental pressure, females have a unique ability to switch their reproductive mode so their eggs can develop either within the female’s body or outside of it.

Brine shrimp are only distantly related to the shrimp we eat and are never found in the open ocean. This is because the brine shrimp’s only defense mechanism against predators is its habit of living in hyper-saline bodies of water.

Altiplano’s salt flats may look like a wasteland, void of living creatures. But if you look closer, you’ll see that some quite sophisticated and fascinating organisms have found ways to carve out a living in this land of extremes.

Land Bridge
Interactive: Anatomy of a Glacier
About
Additional Web and Print Resources