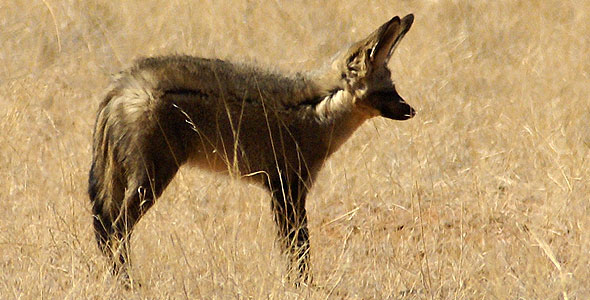 The ears of bat-eared foxes can grow up to 5.3 inches long. For an animal that stands 11.8-15.7 inches at the shoulder, that’s enormous. Bat-eared foxes use these specialized ears to locate termites, dung beetles, and other insects, which make up most of their diet. Bat-eared foxes can hear larvae chewing their way out of an underground dung beetle ball. They can also detect the sound of harvesting termites chewing on short grasses.

The body of the bat-eared fox is ashy gray in color with black limbs and tail. The backs of its enormous ears are also black, and it has a raccoon-like white facemask. The underside of its neck and belly are paler than the rest of its body.

Bat-eared foxes are hunted by several different mammal species, including cheetahs, jackals, spotted hyenas, rock pythons, African wild dogs, and leopards. Their large, bushy tails work as a rudder when fleeing from predators in a zig-zag pattern. They are fast and good at dodging, but their best chance at escaping predation is by fleeing to their underground dens, which have several entrances and multiple chambers connected by tunnels. A bat-eared fox family may have several dens throughout their home range.

Bat-eared foxes are also preyed upon by raptors and must keep a watchful eye while foraging. Most of their foraging is done alone at night. While looking for food, bat-eared foxes walk slowly and quietly with their noses to the ground and their ears cocked forward, listening for insects.

Surviving on an all-insect diet required several adaptations in the bat-eared fox. In addition to their large and powerful ears, bat-eared foxes have specialized extra teeth for chewing up insects, and their lower jawbone is designed to open and close rapidly.

Pairs or groups are often found residing near one another, and individuals come together at dusk to play and groom each other. Bat-eared foxes mate for life, and sometimes two females will mate with one male and share a communal den. The father is very invested in the rearing of young, and he spends a great deal of time caring for them. While the father is watching the cubs, the mother is free to forage for food, including insects, which are a steady food source.  Though they are low in nutrition and cannot be regurgitated for the young, they allow the mother to take in the necessary amount of food needed to produce milk for the cubs.

Did you know: Bat-eared foxes play an important role in termite control. A single bat-eared fox can eat approximately 1.15 million termites each year.

SHARE
You May Also Like
Holy Cow
Voyage of the Lonely Turtle
The Elephants of Africa
Sharkland
Dolphins: Spy in the Pod | Part 2
Super Cats: Episode 1 | Extreme Lives