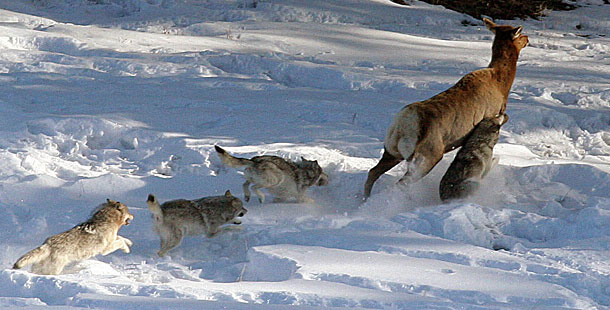 Once the world’s most widely distributed land mammal, the gray wolf, or timber wolf, was systematically eradicated from the continental United States in the 20th century and was added to the endangered species list in 1973. Gray wolves are considered a “keystone” species — one with a dramatic effect on its environment. For example, the recent reintroduction of gray wolves to Yellowstone National Park has led to the recovery of the entire ecosystem, from vegetation to beavers to hawks and eagles. The animal is the direct descendent of the ancestor to dogs. Wolves are distinguished from dogs by their long, powerful muzzle, yellow eyes, longer legs, larger paws (which are slightly webbed for walking more easily on snow) and bigger teeth. The wolf has a two-layered coat, which is generally gray, but can vary in color from white to black.

The highly social animal lives in a pack of around five to nine members, led by an alpha pair — generally the only pack members allowed to breed, and mated for life — plus their offspring and a few unrelated wolves. All pack members care for young, and the pack hunts cooperatively, usually at night, to chase down prey such as moose, elk, bison, reindeer, beaver, and rabbit. The wolves slash at the hind leg tendons of their quarry to disable it, or herd it back toward waiting pack members. Wolf howls and other vocalizations allow the pack to communicate, and advertise their territories (which can cover from 100 to 260 square miles) to neighboring packs.

Did you know? The gray wolf can gallop over short distances at speeds of more than 30 miles per hour, but will usually give up the hunt if it doesn’t overtake its victim within the first 1,000 yards.

SHARE
You May Also Like
Touching the Wild
Dolphins: Spy in the Pod | Part 2
Sharkland
A Life Among the Clouds: A NATURE Short Film
Equus "Story of the Horse" | Episode 2: Chasing the Wind
Hippos: Africa's River Giants