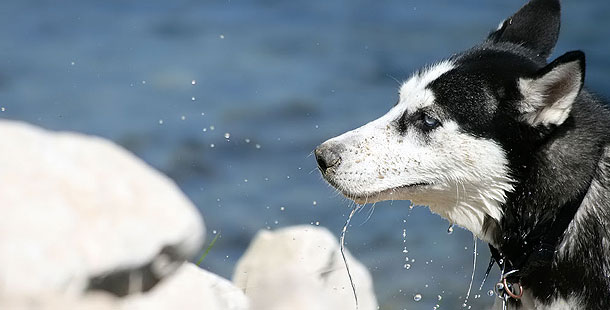 The Chukchi people of northeastern Asia developed the Siberian husky, a sled dog well adapted for hard work and very low temperatures. They were bred to pull for long distances at a brisk speed while expending a minimum amount of energy.

Similar in appearance and stature is the Alaskan malamute, which was developed and used by the Mahlemut people of northwestern Alaska. Modern sled dogs, or Alaskan huskies, are a mix of Siberian huskies, Alaskan malamutes, and other breeds selectively bred for speed and endurance, with the hope that puppies will be born with an instinctive desire to pull. Their coats are thick, to keep them warm in arctic conditions, with a coarse overcoat and a wooly undercoat. Deep chests give the dogs the large lung capacity needed for distance running, and powerful shoulders give them the strength to pull the sleds. Sled dogs are medium sized, usually under 55 lbs (25 kg). Any larger and size becomes a disadvantage—it is harder for the heart to pump blood and oxygen to the extremities of a larger dog.

Huskies are social animals that live in packs and cooperate to hunt. The “pack mentality” translates well to sled racing; the best mushers work as pack leaders, making decisions for the pack. Huskies, like all domesticated dogs, are extraordinarily good at taking cues from humans. They can instantly change course when directed by the musher’s vocal commands. Scientists believe that this ability to follow human commands was a selected trait in the first domesticated dogs. Domesticated dogs have been living with humans longer than any other animal. Based on DNA analysis, scientists believe that the domestication of the dog happened at least 15,000 years ago, maybe even earlier. Gray wolves, the ancestors of all domesticated dogs, do not have this ability to take cues from humans, even when raised by them. In a test to see if dogs could correctly read human communicative signals to locate hidden food, 9 out of 11 dogs successfully found the food. Dogs performed much better on the tests than chimpanzees.

Did you know: When running races, like the 1,100-mile Iditarod, it is important for the dogs to eat a lot—nearly 10,000 calories per day.

The Whale Detective
Dolphins: Spy in the Pod | Part 2
The Elephants of Africa
Dogs in the Land of Lions
The Beauty of Ugly
A Life Among the Clouds: A NATURE Short Film