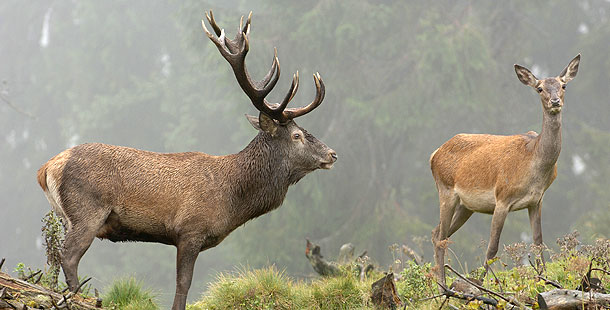 Red deer are social animals that spend most of their lives in male or female herds. The two sexes come together only during the annual mating season. Each spring, young are born. After several weeks of hiding their newborns in the brush, the mothers, called hinds, bring their young back into the female herd. The female herd follows the dominant female, who leads them to seasonal grazing grounds. During the summer, a herd may be composed of as many as 400 individuals.

The antlers of an adult male red deer can grow up to four and a half feet. During the autumn rut, males compete for mating privileges by bashing antlers with the dominant male. In order for a non-dominant male to mate, he must fight, although no challenger will fight unless he thinks he can win. The prize is access to breeding females, and the right of the winner to pass on his genes. In January, after the breeding season has ended, males lose their antlers. They grow back quickly at a rate of nearly one inch per day.

During the harsh winter, the red deer’s metabolism slows in an effort to conserve energy. Red deer have evolved in such a way that the animal can actually significantly slow its heart rate and lower its body temperature, which decreases the amount of energy it expends by nearly 17 percent and helps it to survive in severely cold climates.

Red deer have long been hunted by humans. In fact, red deer meat was found in the belly of a mummified hunter who died in the Alps over 5,000 years ago. Even today, these amazing animals continue to be a popular target for game hunters.

Deforestation and urban expansion pose major threats to red deer, as their breeding and feeding grounds are rapidly being cut off. Man-made roads pose another deadly hazard, though animal friendly “green bridges” are currently being built all over Europe to allow the red deer and other species to travel safely across roads and highways.

Did you know: Ovulating females prefer the vocal calls of larger males, and can detect body size based on the pitch and frequency of a call.