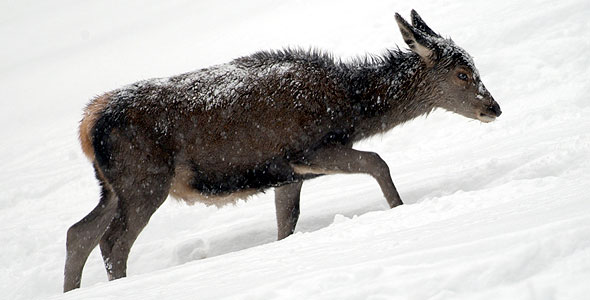 However inhospitable the weather may turn in the highest regions of the Austrian Alps, evolution has equipped the diverse species that claim these heights as their home with the ability to survive. The variations in weather are often sudden and intense, and the adaptations and perseverance required of these alpine creatures in order to ensure species survival are remarkable.

Throughout the year, Austria’s red deer roam the alpine environment in search of food. In summer, the red deer migrate to the highest altitudes and can stay there all season long. But, over the course of the season, the force of the elements can vary widely. Frequent lightning strikes can decimate entire herds that frequent these regions. If the mountain grasslands go dry or are over-grazed by local herds, the red deer will move down the mountainside to lower pastures where there may be more vegetation.

Come autumn, the red deer descend to lower elevations in the forested river valleys and graze on vegetation there before the long, grueling winter. When winter arrives, the landscape is transformed. Snow accumulation can exceed a person’s height in just a few days. Red deer forage for the sparse remaining vegetation on the cliffs, where winds have cleared the snow and left patches of plant life. The strongest deer are able to adapt and reduce their need to eat in winter. As they take in fewer calories, their heart rate, body temperature and metabolism are drastically lowered, and they slow down to reduce their energy expenditure.

Humans are changing everything and disrupting the process of natural selection. Many deer in the Alps can no longer survive the seasons on their own because they have come to depend on handouts from local landowners, farmers and even hunters who put out food to attract the deer. Austria’s red deer management program, too, in an effort to keep deer populations large enough to guarantee hunting success, have set up feeding stations in fenced enclosures near roads, where many deer spend more than half the year.

Each year it gets more difficult for the red deer to fend for themselves as humans encroach on their terrain. Busy roads, hunting stations, eco-unfriendly ski resorts, and the effects of global warming are threatening the long-term stability of red deer populations.

Along with the fenced enclosures for feeding, roads and highways are disrupting the deer’s migration route. More than 10 million trucks and about 50 million cars cross the Alps each year. Seventy-seven million tons of cargo move through the mountains in an average year, including furniture, chemicals, livestock, mineral water and automobiles. By 2020, some predict, Trans-Alpine commercial transport will double. The mountains concentrate the fumes from all these vehicles, and the greenhouse gas emissions are trapped in narrow valleys. The rapid increase in these carbon-emitting fossil fuels is expected to have a profound effect on the climate of the Alps. For the red deer, the problem is that they have adapted to the cold, barren conditions of Austria’s Alpine region. Biologists fear that if the temperature keeps rising, many alpine animals will face quick declines or extinction. According to the Austrian Central Institute for Meteorology and Geodynamics, the Alps are warmer today than anytime in the past 1,300 years. Some creatures have adapted to the constantly changing and gradually more restrictive environment — shifting breeding and migration dates, according to Science Magazine. But the red deer have fewer places to migrate, since they are surrounded by roads and ski resorts.

In 2007, Austria held an international conference on how to cope with the warm winters and lack of snowfall caused by global warming. However, the focus of the conference was not the animals and their habitat, but rather the impact of climate change on tourism and ski resorts. Austria’s Federal Forest Administration is working with land owners, communities and traffic authorities to protect wildlife corridors by building green bridges. And, ski resorts in the Alps are answering the demand for sustainable tourism by offering incentives for visitors who use public transportation and hybrid cars. But even with these green initiatives, it’s uncertain what lies ahead for these mountain dwellers when human encroachment and global warming threaten their natural resources and habitat.