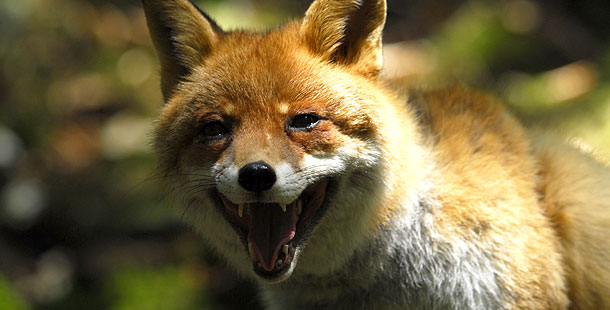 The small, slender bodies of red foxes are designed for speed and agility. In proportion to other canid species, red foxes have longer legs and smaller stomachs — adaptations that allow the animal to run nearly 30 miles per hour. A smaller stomach means they need to eat more often, and red foxes opportunistically eat a wide variety of foods as they traverses their home range at night, such as insects, fruits, earthworms, and scraps left by humans. Although they also hunt during the day, red foxes have very acute sensesto help them succeed as nocturnal predators. Their eyes are designed to work well in low light conditions, and they maneuver their erect triangular ears to locate the faint rustling noises of rodents. When a mouse is detected, red foxes stand alert and motionless, using their ears and eyes to pinpoint the location of the rodent. Then they launch themselves into the air at a 45-degree angle, and land on the mouse, pinning it to the ground.

Red foxes are territorial, and mark their home range using feces and urine. A dominance hierarchy determines who breeds, and the dominant female gives birth each year to a litter of 3 to 12 pups. Mothers keep their offspring in dens, and non-breeding adults help care for the young. There are several different red fox color variants, which can often be seen within a litter. These include the silver, black, and cross variants. All red foxes have thick fur, a wide, bushy tail, and a narrow, pointed muzzle.

Red foxes have the largest distribution of any canid species. They can be found in almost the entire northern hemisphere, in part because they have such a diverse diet. As a species, red foxes have adapted well to human expansion. They thrive in urban areas, and have benefited from the human conversion of forest into agricultural lands. Red foxes are often seen as a threat to poultry and young livestock, even though they usually prey only on weak and sick animals. Though many farmers consider them pests, red foxes play a major role in controlling populations of crop-threatening animals like rabbits and rodents.

Did you know: Red fox predators are eagles, coyotes, gray wolves, bears, mountain lions, and humans, who have been hunting red foxes since the 4th century BC.