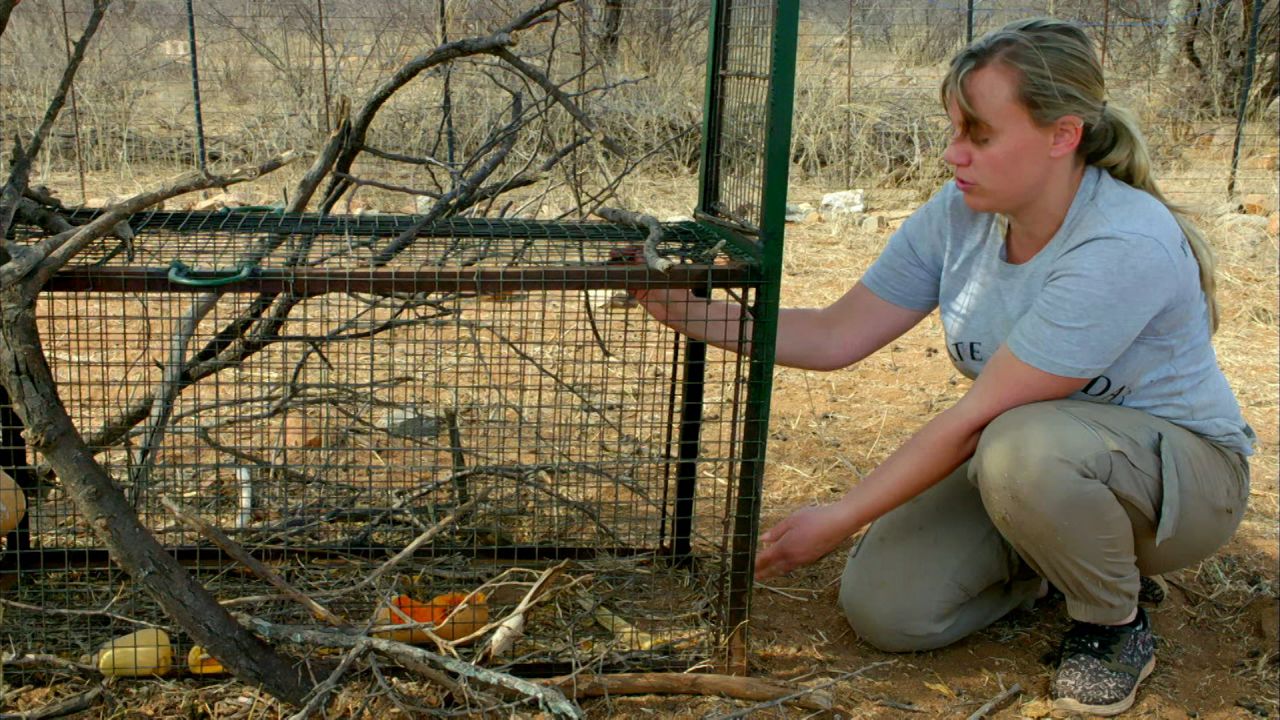 Leah Findlay works for the the Alldays Wildlife and Communities Research Centre in South Africa. She is the research coordinator of the Primate and Predator Project, which seeks to understand the complex relationship between local monkey populations, the large predatory cats who eat them and farmers who consider the monkeys pests because they feast on their crops. The “Animals with Cameras” team worked with Leah and her colleagues to outfit a group of  crop-poaching chacma baboons with custom-built collar cams. The goal: to see if the cameras would reveal something about the baboon’s behavior that would help put an end to the conflict with farmers.

Tell us about the research the Primate and Predator Project is doing. Why was having this new camera access beneficial to your work?

The Primate and Predator Project conducts research on predator-prey interactions and human-wildlife conflict. Among other projects, we have been working with crop farmers over the last five years to better understand and try to mitigate baboons foraging within their crop fields. Baboons can cost farmers substantial sums of money when they consume and damage human-grown crops, whilst baboons often lose their lives when farmers try to protect their crops. One of the Primate and Predator Project’s missions is to provide farmers with a crop protection method that is non-lethal to baboons, and other wildlife.

Studying an animal that has been heavily persecuted by humans is very difficult, as the baboons run and hide as soon as they see a person. The cameras therefore gave us a unique opportunity to get up close and personal with these baboons. We hoped to see how they approached the crop fields, and what their foraging rates were when in the fields – as we can never get close enough to collect this data with these baboons. Unfortunately, and perhaps typically, the baboons didn’t visit the crop fields while they had the cameras on. However, we were still able to view their behavior outside of the crop fields, and what they were feeding on, which came with some surprises!

Describe the process working with the film crew. How did you ensure the cameras fit properly and unobtrusively on the baboons?

Catching the baboons was definitely the hardest part of the job. They are understandably wary of the traps we use, as they are of human presence. It was adult baboons we were after, as the younger individuals are too small for the collars we used. As a result, we had to release some smaller animals without putting a collar on. However, when we finally got the right baboon, we were able to attach the collars. We had a special camera designed by the BBC team that could fit onto a baboon collar, which would rest below the chin. Of course, we didn’t know the size of the baboons necks in advance, so we had to cut the actual collar to size once the baboon had been sedated by the vet and measured the neck size. It has to be not too tight as to cause problems for the baboon, but not too loose to let the baboon take it off over its head. When first put on, the baboons will often give the collar a good tug, and try to get it off. When working with an animal with hands, you have to think about these extra things! We had to get this done quickly before the anaesthetic wore off and the baboon woke up, and we had to make sure that the camera, which was pre-attached to the collar, remained in the center so that it would hang in the right place once on the baboon. I was very lucky to have an amazing team working with me – the BBC crew who did all the work with the cameras, and the farmer and vet who helped with the fitting and cutting.

Darting of the baboons was carried out under permit by an experienced wild animal veterinarian who has worked previously with Dr. Findlay.

The baboon collars weighed less than five-percent of the animals’ bodyweight and were designed to not hinder movement. In addition, they were outfitted with a timed release mechanism that caused the collar to fall off after a period of eight hours.

What were the most surprising or interesting things the footage revealed?

I think the most surprising thing we found on the footage from the cameras was the baboons foraging on and searching through animal dung. We haven’t seen this in our area before, and there have been very few reports of coprophagy, as it is called, by baboons in the scientific literature. It really hammered home just how little there is out there for baboons to eat at that time of year, and why they are so keen to forage on crops, despite all the risks.

How will this footage help your research going forward? Will you continue to explore how new types of technology can assist in your research?

We have gotten a number of ideas from the footage to help with our mitigation development work. We are going to produce a ‘day in the life of a baboon’ video from the footage we have to show to farmers, in the hope that seeing how little there is for baboons to eat during the dry season, they will have a little more tolerance towards baboons coming in to eat their crops. We also want to look into whether managing the land better could be an option, to provide more baboon forage during the dry season – such as with the lala palm fruit that we saw them eating in the footage. And we would like to investigate having a ‘bare zone’ between the bush and the crops, to see whether this helps deter the baboons from entering the crops because they will be more visible to the field guards in this situation.

I really think the answer to deterring baboons from crop fields lies in new technology, so we will definitely continue to explore new technologies and how they can help us. If anyone out there thinks they could help with their technology I would love for them to get in touch with me!