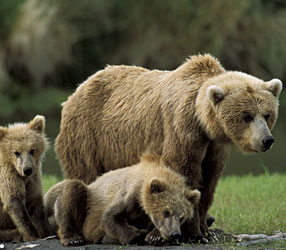 Held in awe by Native American Indians, classic characters in folklore, feared, trapped, hunted, displayed in zoos and made to perform in circuses, the bear has long had a complicated relationship with humans. The bear intimidates with its size and strength, but it may be the bear’s undeniable intelligence that causes us to revere the creature even as we fear him.

Considered by many wildlife biologists to be one of the most intelligent land animals of North America, bears possess the largest and most convoluted brains relative to their size of any land mammal. In the animal kingdom, their intelligence compares with that of higher primates. As highly evolved social animals, bears form hierarchies and have structured relationships with each other, sometimes even sharing resources. In fact, the polar bear, typically thought of as solitary, actually lives within a community of other polar bears and never loses track of other members.

We’ve witnessed them performing complex tasks — a sign of an ability to learn and process information. We’ve seen circus bears balance on balls, ride vehicles or roller skate, and play sports and musical instruments. Zookeepers and animal trainers consider bears to be smarter than dogs.

The bear’s cunning is legendary when it comes to guarding itself against danger from hunters and poachers. The animal’s uncanny ability to evade human predators during hunting season could almost be considered forethought. Some researchers believe that grizzlies possess self-awareness, as there have been accounts of grizzly bears covering their tracks or concealing themselves from hunters with rocks and trees.

Beyond this ursine wiliness, we find further proofs of their intelligence in their habits. Like humans, bears are omnivores. It’s well known that omnivores are often substantially smarter than more specialized feeders. Following a varied diet means that bears have to remember a great deal of information about food sources — where to find which foods and when. A grizzly’s memory is so sharp that he can remember where they encountered a certain food ten or more years earlier. And bears remember familiar animals for years, recognizing them and identifying their social status from a distance as far as 2,000 feet away.

It helps that bears are creatures of detail. They take constant inventory of their surroundings, allowing them to compile a detailed map of their territories, complete with information on where to find their preferred foods and when they can obtain them. The polar bear lives in a world of an ever-changing landscape. Hunting and surviving within an ice relief below water and on the surface demands a sharp memory.

To learn survival skills from their mother, cubs spend several years with her. She educates them about what plants are good to eat and where to find them. By the time a juvenile bear leaves its mother, it knows what plant foods are available at each time of the season, and what habitats are likely to have those foods over a very large area. That knowledge serves them well as they move into new areas, learning and remembering where new food sources are found in a new environment. This knowledge is also critical to finding food when food sources change drastically from year to year depending upon weather and climate.

In our own encounters with wild bears, we know that a bear’s resourcefulness seems to know no limits. Bears have long been engaged in a battle to figure out ways in which to benefit from living in close proximity with us. They are constantly devising new ways to get at garbage, empty birdfeeders, devour fruits from orchards and farms, clear out beehives, and open metal and glass cars to get to food that their keen sense of smell draws them to. The occurrence of polar bears scavenging in town dumps in Manitoba is on the rise. And both grizzly bears and polar bears have become more popular visitors of the dump in the North Slope town of Prudhoe Bay, Alaska. Grizzly bears in national parks have become so adept at getting into garbage bins and camper trash, that new models of supposedly “bear proof” containers are rolled out each season. New models are “market tested” with grizzlies who had to be removed from the wild because they were too comfortable around humans.

As highly intelligent and adaptable as bears are, they continue to suffer an unfortunate fate at our hands. Many bears are needlessly captured and shot because of human fear and carelessness. “Nuisance” bears, or bears that raid garbage or property, are only a nuisance when humans fail to take precautions that can keep the bears away. As humans move into territories that traditionally belong to the bears, encounters between the two will become more common. As intelligent as bears are, humans are the more advanced and intelligent species. It is our responsibility, then, to ensure that these creatures live safely within both of our worlds.

Deep Jungle: The Beast Within
Holy Cow
Running With The Herd: A NATURE Short Film
Touching the Wild
My Congo
Dolphins: Spy in the Pod | Part 2