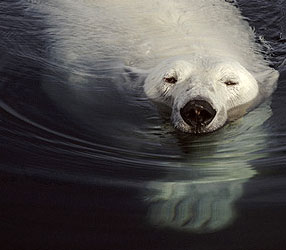 The polar bear has become the poster child of global warming, but there’s more to the Arctic than ice and polar bears. Beyond these two famous and prominent features of the Arctic environment, there is an entire intricate ecosystem of wildlife and plant life that will be profoundly affected by a prolonged warming trend in the Arctic.

There’s no doubt the Arctic is warming. In fact, this extreme region has warmed faster than any other on earth, with the Arctic temperature increasing three to five times faster than the Earth as a whole over the past 100 years. Climate models predict that the Arctic will become an additional 7 to 12 degrees Fahrenheit warmer during the next century.

Experts predict these rising temperatures are likely to cause the melting of at least half the Arctic sea ice by the end of the century. Melting ice is expected to lead to even higher Arctic temperatures as bright white ice plays a significant role in reflecting the sun’s radiation. As ice melts, more of the dark ocean and land are exposed to absorb the radiation, thus further warming the climate. Research has found that over a major portion of the ice-covered Arctic Ocean, sea ice is 40 percent thinner than it used to be. And some climate models predict that by 2070, there may be no summer ice cover in the Arctic at all.

The disappearance of sea ice is a particularly dire threat to the polar bear, a super specialist in the Arctic environment. Polar bears rely on the ice to hunt seals, their main food source, and also to rest between hunts out on the ice. Trapped, drowning and starving bears have become such a concern that in September 2007, the U.S. Geological Survey (USGS) released a series of studies that led its scientists to conclude that “future reduction of sea ice in the Arctic could result in a loss of two-thirds of the world’s polar bear population within 50 years.” As sad as such a fate for this majestic creature would be, the consequences would extend far beyond the bear. A polar bear decline could trigger what biologists call a “trophic cascade,” or a complete uncoupling of the Arctic food chain.

As much attention as the effects of melting sea ice on polar bears has drawn of late, it is important to understand that the thaw will have immediate effects on everything in the marine food chain, from benthic invertebrates to marine mammals. What will be the fate of the ringed seal, bearded seal, bowhead, beluga, and walrus — all creatures that depend on the ice for habitat or food?

Warming not only affects sea ice, it alters the Arctic’s terrestrial landscape. Melted permafrost means a proliferation of low-lying shrubs. These northern-spreading shrubs establish a new order of plant life, shading out low-growing lichens and plants like ground willow and cotton grass, all favorite foraging items for grazers like caribou. Without their main summer and winter foods, caribou are vulnerable to starvation.

Another species affected by changing Arctic vegetation is the lemming. Drastic changes in its food supply of sedges and mosses, along with a lack of snow tunnels to burrow in, will challenge the survival of these rodents and may cause their populations to crash beyond repair. When lemming numbers drop, so do the numbers of predators like snowy owls and Arctic foxes. Researchers have already observed warning signs in the Arctic fox population in the form of an invasion of red foxes into the traditional range of Arctic foxes.

With a warming Arctic comes an earlier spring and a proliferation of parasitic insects such as flies and mosquitoes. For Arctic dwellers as disparate as caribou and guillemots, a population explosion of insects is at best a nuisance, and at worst, life-threatening. Grazers spend less feeding time and more energy just trying to escape these pests. Arctic-nesting Brunnich’s guillemots in Canada have been such victims of relentless mosquito attack, they have been observed abandoning their nests.

A changed season for insects also has a different effect on some other species of birds, which time their migrations to coincide with insect swells. Northern Alaska dunlins, for example, migrate from Asia and lay their eggs to take advantage of peak insect populations in order to feed their young. Warmer temperatures may cause the insects to hatch earlier, throwing off the carefully timed breeding and nesting season of the dunlins.

With the Arctic experiencing the most rapid and severe climate change on Earth, the plants and animals that have evolved to survive in this extreme habitat come increasingly under threat. Like the canary in the coal mine, the Arctic can serve as our early warning sign of impending climate change. Observing the tumultuous change its inhabitants are experiencing can be a lesson to us about the changes in store for the rest of the world.