They bite, slither, and slide — and they save fingers and lives.

While the sight of a wriggling, blood-sucking leech may make many people feel queasy, the spineless worms can also help people feel better — as NATURE’s BLOODY SUCKERS shows. The ancient physician’s art of using leeches has made a modern medical comeback: the worms help doctors do everything from reattach severed fingers to treat potentially fatal circulation disorders. 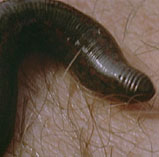 Leeches have been used by physicians since ancient times.

Leeches — which are found all over the world, living mostly in fresh water — have long had a place in the doctor’s medical kit. Five thousand years ago, Egyptian medics believed that letting a leech sip a sick patient’s blood could help cure everything from fevers to flatulence. And in medieval Europe, leeches were so closely associated with doctors that physicians were called “leeches” — and they used millions of the parasites annually to treat patients.

In the 20th century, however, most doctors turned away from the worms, which in nature feed on everything from frogs to alligators. A few physicians, however, saw that leeches might play a special role in certain kinds of surgery, by helping promote blood flow to damaged tissue. That’s because when leeches bite a victim, their unique saliva causes blood flow to increase and prevents clotting. As a result, once bitten, victims can bleed for hours, allowing oxygenated blood to enter the wound area until veins re-grow and regain circulation.

The leech is invaluable in microsurgery when faced with the difficulties of reattaching minute veins. Ears have such tiny veins that, in the past, no one was able to successfully reattach them. Then, in 1985, a Harvard physician was having great difficulty in reattaching the ear of a five-year-old child; the tiny veins kept clotting. He decided to use leeches and the ear was saved. This success established leeches in the modern medical world. Since then, leeches have saved lives and limbs, reducing severe and dangerous venous engorgement post-surgery in fingers, toes, ear, and scalp reattachments; limb transplants; skin flap surgery; and breast reconstruction.

Perhaps the best known advocate of medical leeches is Roy Sawyer, an American researcher. Several decades ago, he recognized the potential benefits of “leech therapy” and started one of the world’s first modern leech farms. Today, the company — Biopharm, based in Britain — provides tens of thousands of leeches every year to hospitals in dozens of countries. Two species are commonly used in leech therapy, which can last for up to 10 days. 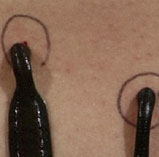 Leeches do have their downsides. Sometimes, they slip off patients and reattach themselves in unwanted places. And no matter how helpful, some patients simply can’t stomach the thought of a blood-sucking parasite burrowing into their skin. So some scientists have developed a “mechanical leech” that can perform some of the same duties — without the gross-out factor.

“In the case of the leech in medicine, we think we can improve on nature,” says Nadine Connor, a University of Wisconsin at Madison scientist who in 2001 helped develop the mechanical leech. The device, which looks a little like a small bottle attached to a suction cup, delivers an anti-clotting drug to damaged tissue and then gently sucks out as much blood as needed. And, unlike real leeches, the mechanical version is insatiable and can remove as much blood as doctors think is necessary (real leeches drop off when engorged with blood).

“But perhaps the mechanical device’s biggest advantage is that it is not a leech,” says Connor. “People don’t want this disgusting organism hanging on their body. This added psychological stress for both patient and family members compounds an already difficult situation.”

Other physicians, however, still swear by the natural wrigglers. Leeches, they say, are a nearly perfect — and self-reproducing — surgical tool. And the leech’s bite, they add, isn’t nearly as bad as its reputation.