Mark Ferns, the producer and presenter of NATURE’s BLOODY SUCKERS, believes in first-hand experience. While making the film, he decided the best way to inform and entertain viewers was to become a victim of bloodsuckers himself. “I wanted the best footage possible of these animals feeding,” he says. “And the best way I could think of getting it was to use myself as a subject.” So Ferns allowed himself to be bitten, and his blood lapped, by everything from the large chipo bug to the vampire bat.

He recently shared some thoughts on his “draining” experience: 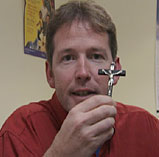 Filmmaker Mark Ferns hopes for the best before offering himself to a host of bloodsuckers.

My interest goes way back to childhood grade-B vampire movies, and later learning from my high school library that there really are vampire bats. I was surprised that vampires were not just a creation of Hollywood. It was even more intriguing to find that real vampire bats in South America were not discovered by European scientists until well into the 19th century, so the Transylvania legends of a bat-like Dracula had developed quite independently from knowledge of the real thing. Those early reports were careful to avoid hysteria and emphasize that vampire bats prefer to feed on horses, cattle and pigs but seldom if ever attack people.

Then, in 1998, I heard about a case decades earlier, where a sleeping forestry worker in rural Argentina had been repeatedly plagued by vampire bats. He had been bitten dozens of times on the face and scalp. The bats came back night after night, re-opening the same victim’s wounds and ignoring his fellow workers. Every night the poor man tried to block the chimney, all the gaps around windows and under doors, but the bats always found a way in to the workers’ hut. Eventually the unlucky victim had to flee to the city. So vampires could attack people and — what’s more — the little horrors seemed smart and determined. I was hooked!

Unfortunately, everyone directly associated with that famous case had died or moved away.

Meanwhile, my colleagues uncovered new scientific reports of a bird that feeds on bloody wounds of elephant seals, a blood-sucking butterfly, and rare vampire bats that only bite birds. Add those to the classic nasty little suckers that we all love to hate, like leeches and mosquitoes, and there was a wealth of possibilities for a great documentary — even if most of the critters were small, very shy or nocturnal — a pain for wildlife filmmakers!

You decided to let many of the animals in the show take a taste of your own blood. Why?

Originally, I was aiming to film local people as well as some surprising animals being bitten, showing the broadest array of victims who have to live with the persecution of blood suckers every day. But it wasn’t so easy to convince people who try hard to avoid being bitten in their regular lives to help us by being victims for the camera. With careful preparation, we were able to minimize the risk of disease. But people were nervous and always said things like: “If you are so confidant there’s no risk, why don’t you do it?”

I started thinking about more of a reality TV-style show where various crew members including myself and some consultant scientists would get bitten. But most of the scientists and all the crew thought it was a disgusting idea!

So it was down to me. And the more I thought about it [the more advantages I saw]. I didn’t want to push people to do something I would not do myself. Plus [we] realized that the stuff any audience would react to most strongly was a human being bitten — and preferably a victim who is able to tell people about the experience.

Yes. It felt like I had every vaccination jab known to medical science before the filming. Getting a bunch of those on one day makes you feel pretty terrible — the immune system must wonder what has just been dumped on it. Then there was the usual anti-malarial pills. I had suffered malaria before, so was very careful to use those diligently.

The scariest possibilities are the mosquito-borne diseases for which there are no shots or good treatments, like Dengue and Ross River fevers. They are both scourges of wildlife crews who work in the tropics a lot. Also Chagas disease carried by the South American “kissing bug” is bad because the symptoms are not always obvious and can show up 20 years later. That was why I only let myself get bitten by a clean, lab-raised bug. 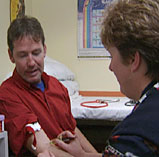 Ferns received numerous vaccinations before allowing himself to be bitten.

Did you get ill during or after the production due to any of the bites?

Well to be honest, I felt pretty awful by the end of a year’s shooting. But all the medical tests turned out negative. It was more likely just a combination of jet lag and progressive tiredness after racing around the world and spending months in the tropics, when I was not totally acclimatized.

Of course, I worried about unknown diseases that cannot be tested for. For instance, leeches have strong anti-bacterial chemicals in their gut so they don’t transmit bacteria, but no serious research has ever been done on whether they carry viruses. But I’m pleased to say I feel much better these days.

Did any of the critters not cooperate?

Vampires were one of the toughest assignments. We spent weeks waiting all night trying to video wild vampires feeding on cattle and eventually, humans, because they are so cautious they do everything they can to avoid the subtlest lights (even moonlight). You might notice them onscreen scurrying from shadow to shadow.

When we used infrared cameras (with no visible light) they were still very cautious and could always tell where the crew was hidden, probably finding us with their echolocation.

Apparently, they often wait for hours, checking breathing patterns to confirm that victims are asleep. They typically bite between 1am and 4am, when victims are in their deepest sleep. Not surprising, when you consider that they get swatted, stomped on, or even shot at if caught in the act! They often bite sharply, then jump away, only to return when the victim is quiet and the wound is still bleeding. Then they lick gently like a cat lapping milk.

Eventually, I decided there was no point hiding the crew. Instead we waited till they got confident enough and hungry enough to bite me in plain view, so long as I pretended to be asleep.

The other tricky time was the leech bites. Not that it was difficult to get them to bite, but it was difficult to stop the wounds from bleeding afterwards. We wanted to get different angles plus slow motion and “time-lapse” versions of the leech feeding, so we used lots of leeches and they made lots of wounds on my arms and legs. For the extreme close-ups, my limbs often moved too much, so we had to tape my arm or leg to a table or chair for 40-minute stretches, which was uncomfortable.

Leeches have strong anti-coagulants in their saliva designed to keep the blood flowing steadily, sometimes six or eight hours later. Despite being wrapped in cotton wool and bandages, the little triangular wounds would still be bleeding and seeping through your clothes. That made it a bit messy and embarrassing going out to dinner at the end of a day’s leech filming.

Any blood-drinker you would have liked to include in the show but couldn’t?

My biggest indulgence would have been to get a sequence of the giant Amazonian aquatic leech which grows up to a foot long! It feeds on large fish and maybe on legs of mammals like the tapir or deer wading through swamps. But these leeches are very rare and no one has managed to video them feeding outside a lab setting. Given all the other tough assignments we were gunning for, it was just too ambitious. Plus, this monster stabs victims with this nasty harpoon-type proboscis. Once I became the primary blood banquet for this project, well, I kind of went off the idea.

Vampire bats typically bite between 1am and 4am, when victims are in their deepest sleep. 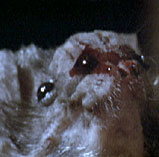 Vampire bats typically bite between 1am and 4am, when victims are in their deepest sleep.

What was the toughest location to work in?

The swampy lowlands of Venezuela and Costa Rica, where we shot the vampires feeding on cattle were tough at times. During the hottest season, the mosquito and biting flies swarming just after dusk were horrible to work around, especially when the crew are trying to keep still and quiet. So often in the wetter parts of the tropics, it’s a choice between keeping few clothes and smothering yourself in repellent versus covering up with clothes and stewing in your own sweat.

By the way, there was only a very brief hesitation before deciding that I did not need to get in the water with the notorious tiny candiru fish that infiltrates the genitals of unfortunate swimmers. My full admiration goes out to camera operator Christian Baumeister who did get in the water, with only a double layer of swimming trunks for protection.

If you could be reincarnated as any of the blood suckers in the show, which would it be?

Maybe the common vampire because they were very smart and seemed to have about seven senses working for them at once. But the kissing bugs were intriguing as well — they were very calm, determined, didn’t make irritating sounds like mosquitoes, and their fearsome looking mouth parts actually did not hurt at all or cause itchiness afterwards. If it wasn’t for the fact they can spread Chagas disease, I would have got to like them.