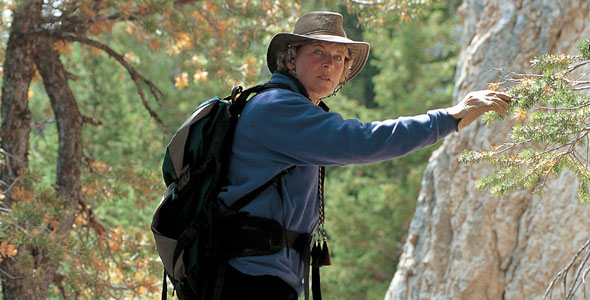 Several years ago, I received a telephone call from the popular host of the PBS WILD AMERICA series, Marty Stouffer. He had a documentary film assignment in mind for me. “I want to make a film about mustangs,” Marty explained. “Interested in shooting it for me?” I immediately said yes. I hadn’t had a horse since I was a teenager, but Marty thought I knew a lot about horses. I was excited but worried. In my experience, horses just stood around in fields and grazed. How could I make an interesting TV show about that? I was completely ignorant about the complex and fascinating world of wild horses.

In March 1994, I stood in the chill of pre-dawn on a red desert hilltop ready to start filming. The desert lay at the base of flat-topped mountains the Crow Indians call the Arrowheads, a wilderness home for black bears, mountain lions, bighorn sheep, mule deer, golden eagles, coyotes, and about 175 wild horses

I held my breath as six wild horses wandered from behind a hill and into a sea of blue green sage. I focused my 600mm lens on a newborn foal, with a huge diamond-shaped star, trotting to keep up with his pale buckskin mother. A grulla mare, her black yearling son, and a striking palomino filly followed. Some distance away was the stallion — black as night with a white snip on the end of his aquiline nose. When I stood up and bent back over the camera, the stallion saw me and pranced forward, shaking his head in agitation.

He stared, snorted, and wheeled. In perfect synchrony, his family ran away with the stallion galloping in the rear to protect his family from the deadly silhouette on the hill. It was a moment I will never forget. Even then, I felt a deep connection to the black stallion. I later learned his name was Raven.

After the reaction of Raven’s band to me and my camera, I believed I would need to film from a blind. So, when the snow melted, I navigated the miserable road to sub-alpine meadows atop the mountain. I stationed myself on a cliff above a water hole. Nestled between boulders, I felt confident my camera and I were virtually invisible.

Within minutes, a golden dun stallion named Shaman approached. As his large band drank, the stallion jerked his head into the air, sniffed and looked up. I did not blink. Suddenly, he snorted explosively and the entire band raced away, leaving me alone in my cliff blind. That worked well, I told myself, surveying a horseless meadow. Not only could wild horses see any movement, they could smell any danger. I needed to rethink my strategy.

Over the next few days as I sat in frustration, Raven and his family appeared. Day after day, they seemed to find me rather than the other way around. I began waving at them — something told me to be quietly conspicuous. I watched to see the direction they were traveling and set up my camera ahead of them. Over time they paid me the highest compliment a wild animal can pay a wildlife filmmaker: they ignored me.

By now there were three foals in Raven’s band, the one I named Diamond (who was turning into a blue roan), a solid grulla, and a strawberry roan colt with a huge star. In September, the two younger brothers died in a Bureau of Land Management roundup. It was a tragic loss for Raven’s family and a shocking end to an idyllic summer for me. The following spring, nothing could keep me from returning to see if Raven’s family could recover from their horrible loss.

It was late May. I was intently filming a three-year-old stallion trying to breed his father’s newly acquired mare. When the older stallion returned, his son innocently clacked his teeth like a foal, as if to say “Don’t hurt me, I’m little.” Young stallions are usually ousted from their bands at two to avoid in-breeding, and this three-year-old was pushing his luck.

Then out of the corner of my eye, I saw a flash of white in the forest. Seconds later, Raven’s palomino mare broke out of the trees with her newborn and led him right past my camera. The colt was just hours old and he tottered to keep up with his mother. He was unlike any foal on the Arrowheads, for he was nearly white. The band was on an uphill trek and I followed. Within a half-hour, they arrived at a snowbank under dense trees. This was their water source until water holes on the mountaintop melted. The colt sniffed the cold whiteness and collapsed in a heap in the shade. As I watched him breathe I counted his ribs. I had never seen a newborn foal. Were they all this fragile? I named the colt Cloud and prayed he would live.

Two weeks later, the frail colt had blossomed, displaying the boldness that would become his trademark. His two sisters were several months older than Cloud, and targets for his teasing, especially when they were sleeping. He would nibble on their manes and pull their ears. He galloped around circular stands of firs like it was his own personal racecourse. Round and round he flew, seeming never to tire.

When Raven thought his little fillies had wandered too far from the band, he gently reprimanded them by snaking them home, laying his ears back and lowering his head. Cloud mimicked his father and, when a little filly came to visit, he laid his ears flat, dipped his head low and chased her away. Everything he did that summer led me to conclude, “One day you will become a great band stallion like your father.”

When summer ended, so did my filming for WILD AMERICA.

Return to the Arrowheads

For nearly two years I filmed throughout the world. But I was haunted by Raven, Cloud, and the family. They had captured my imagination and my heart.

Fortunately I was hired to produce another film that included wild horses, so I returned to the Arrowheads. I was better prepared this time. I had learned that their communication, so subtle one moment and broad the next, was reminiscent of wolves. Each family member had a place in the hierarchy of the band. Parental discipline was clear, consistent, and fair. And the ritual encounters of the stallions were unforgettable. From a distance their high-pitched shrieks echoed through the forests and canyons.

Cloud was celebrating his second birthday on the day I returned to the Arrowheads. I found that Raven had kicked both him and his brother Diamond out of the band. Finding them would prove to be a challenge, for bachelors roam unpredictably and for long distances.

Using binoculars, I surveyed the vast ridges of Tillet where Cloud was born, and across a deep, impassable canyon to Sykes Ridge with its hundreds of rippling fingers and shallow canyons. A white horse! It had to be Cloud. Five hours later, I was on Sykes. Cloud looked up and I waved. Remember me? I was relieved when he went back to playing with a dun bachelor, spinning and nipping at the smaller stallion’s legs. What a beauty. His coat gleamed and his body was well-developed for only a two-year-old.

Over the summer he interacted with the other bachelors on the mountain, running across flower-strewn meadows, dashing just close enough to the family bands to rile the band stallions. Like a gang of rowdy teenage boys, bachelors are freedom personified.

In the fall, another roundup shattered the tranquility of the Arrowheads. Of the bachelors captured, only Cloud was released, because of his unusual color. I searched everywhere for him over the next two months. When the snow began falling, I lost hope of finding him and feared he might be dead.

In the spring I returned to the mountain, not knowing what I might find. If Cloud were alive, he would surely follow the green grass to the top of the mountain. While I was filming a band of horses running to water, I spotted bachelors racing over the hill and Cloud was right in the middle of them. He was alive!

As a four-year-old, Cloud made an unusual decision. He began to dog one of the toughest band stallions on the mountain, Mateo, a burley bay in his prime and built like a sumo wrestler. Never mind that most stallions are at least six when they attempt to start a family. Cloud’s strategy: follow as closely as he dared and get the shorter stallion to chase him. He would eventually wear the bay down and steal his mares. The game lasted all summer. In the end, it was Cloud who wore out, and went lame.

He joined a group of bachelors living far outside the horse range. He went into winter thin, lame and listless. This time, I thought he might be gone forever.

But Cloud appeared the next spring as a five-year-old, and he had changed. He was lean, mean, and determined to start his own family. He fought the powerful blue roan stallion Plenty Coups for his mares. Cloud’s strategy was the same. During one grueling chase, Plenty Coups made a misstep. The stallion hobbled to a halt, licking the blood running down his leg. Then he continued to give chase — on three legs. Days later, when fog sealed the mountain in a gray shroud, I returned home to Colorado, not knowing the outcome of their epic struggle.

Later that summer, I rode my once-wild horse, Trace, to find Cloud. We saw Plenty Coups at a spring-fed water hole. He had lost his whole band, his mares divided among various stallions.

Only a quarter of a mile away, Trace and I located Cloud. Ironically, he was not with a Plenty Coups mare but an older grulla female named Queen. The mare had given birth to a sickly foal and when her band left, she and her yearling son stayed with the foal. Cloud found them and stood quietly by the mare’s side. When the foal died, the mare and son stayed with Cloud. And so, not in a clash of teeth and hooves but in a moment of stillness, the young stallion achieved his goal of starting his own family.

By early June, I had still not located Cloud. Then, near the spring-fed water hole, he appeared! He followed down the muddy slope by a blue roan mare and her yearling daughter. The mare was Sitka, Shaman’s lead mare. I couldn’t imagine Cloud taking her from the formidable stallion.

Equally startling, below the snow-fed water hole, I spotted what looked like a light-colored rock in the grass that I hadn’t seen before. I focused my long lens on the shape. It was a colt with a huge star. When the baby stood, I gasped. It had a white mane and tail. A palomino! Nearby was Plenty Coups’ black mare with Shaman. It was clear to me I was looking at Cloud’s son. Cloud had bred the black mare, perhaps in the fog after Plenty Coups was injured. Yet, the young stallion could not hold on to her.

In July, Sitka foaled and Cloud had his first foal to raise. Though not of his blood, the little grulla would become his son in every other sense of the word. I named him Flint and he would one day need every bit of toughness his name implies.

Predation was high that summer. Mountain lions preyed on nearly a third of the foals and Cloud’s light colored son was a vulnerable target. Marauding bachelors harassed Cloud’s family. A roundup separated families and a wildfire threatened to destroy all the wild horses. Through it all, Cloud survived, as bold and brave as the precocious little white colt who first captured my heart.