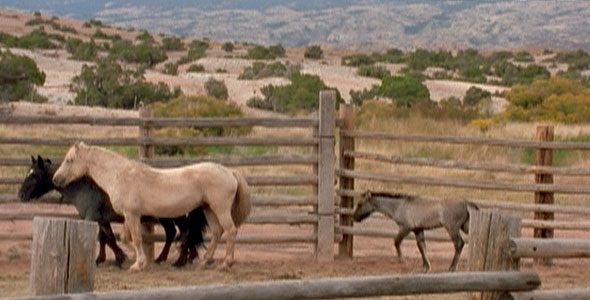 Why does the government conduct roundups that affect Cloud and his family as well as countless other wild horses? What’s at stake for the mustangs of Montana and other Western states and what happens to the animals auctioned off? Use the guide below to find out more about this longstanding controversy.

How did the roundups get started?

For decades, wild horses that came too close to cattle or sheep on public grazing lands were targets for capture or slaughter. Airplanes or cars were used to round up horses that got in the way of domestic livestock. Water holes were contaminated with poison to kill them off. Outraged by the gratuitous destruction of the horses, Nevada resident Velma Johnston (known as “Wild Horse Annie”) launched a national campaign to encourage states and the federal government to protect the wild horse as a symbol of the American West. In 1971, Congress responded, passing the Wild Free-Roaming Horses and Burros Act that authorized only agents of the Bureau of Land Management (BLM) to gather the horses as part of their work in preserving federal lands

Why not just let the horses run free?

Some animal activists think they should run free. They argue that the West’s wild horses, which number roughly 47,000, are greatly outnumbered by privately owned cattle and sheep that also graze on public lands. They portray the Bureau of Land Management as a special interest group for ranchers.

Needless to say, the BLM disagrees. According to the bureau, the roundups, known as “gathers,” are used to keep herds from multiplying beyond a sustainable population. State BLM offices estimate that wild horses repopulate at the rate of roughly 18 percent per year. Apart from the mountain lion and black bear, wild horses have few natural predators. The BLM claims that without their intervention, wild horses would die from starvation or dehydration as they compete for limited range and water resources with other wild animals and livestock. Drought, disease, and fire are also cited as justifications for a roundup.

The Wild Horse and Burro Freedom Alliance, however, points out that wild horses have diversified grazing habits and usually only briefly enter cattle-grazing areas for water. They note that even after massive roundups of mustangs, grazing areas are not necessarily improved for cattle.

How are roundups carried out?

Since 1976, the BLM has used helicopters. Flying at low altitudes, bureau agents drive the herds for miles to an area where they are then loaded onto trucks headed for a holding center. Agents may bring in an entire herd and then winnow out adoptable horses or take in a band out of an entire herd. Depending on its size, a roundup can last for several days or several weeks.

The bureau maintains that helicopters are the most humane way of driving these wild animals across plain and mountain ridge to the centers, but animal activists disagree. The Fund for Animals argues that the sound of the helicopters can spark panic in wild horse herds and place undue stress on the animals — particularly in late winter or during droughts. Of particular concern are mares that are pregnant during the roundups. Foals, unaccustomed to running long distances, can also suffer various limb injuries that make them unsuitable for adoption.

Once at the holding area, wild horse specialists separate the animals according to sex and age. Mares with foals are kept apart. The bureau states that it makes “every effort” to reunite mares with lost foals. Agents then decide which horses are eligible for adoption, which go into a federal rest home, and which are returned to the range.

How many horses does the BLM roundup each year?

Totals and the frequency of the roundups vary according to the target area. Local BLM officers decide upon the figure based on periodic studies meant to indicate how many horses can co-exist with native wildlife and domestic livestock and still have adequate access to water and fodder. Some horse advocates question this practice and argue that the 1971 act and a subsequent 1992 regulation does not empower the Bureau of Land Management with decision-making powers about the removal of wild horses. They claim that only the Secretary of the Interior can make binding decisions on wild horse removal strategies. In fiscal 2003, the BLM removed 10,091 horses from public ranges.

Where Cloud lives, in Montana’s Pryor Mountains, 6 to 12 stallions were captured in late September 2003 to keep the herd at 140-150 animals, according to the Casper STAR-TRIBUNE. Roundups in this part of Montana occur once every 3 years.

How does the BLM choose what horse to keep or not?

In theory, it’s a question of what characteristics — sex, age, genetic stock — the BLM’s local wild horse specialist thinks will best help a herd maintain its “appropriate management level” or AML. An AML is a target population for a herd that guarantees that there will be adequate vegetation and water for livestock and other wildlife without undue stress on the environment. In some locations, these criteria are determined with the help of wild horse advocates.

Horses under five years old are sent to a facility where they are vaccinated, wormed, and freezemarked (branded with an iron chilled in liquid nitrogen) before being offered for adoption.

How are wild horse adoptions managed?

In 2003, about 6,185 wild horses were adopted, according to the BLM. Adoption fees are usually established by competitive bids at an auction — the minimum price is $125, the average is $185. Any person who can pay the fee, is at least 18 years old, has no prior conviction for inhumane treatment of animals, and can demonstrate to BLM inspectors that the horse will be adequately cared for within the U.S. is eligible to adopt a horse. Individuals can adopt up to 4 wild horses per year. Candidates to adopt a horse must sign a statement that says that they will not sell the horse to a slaughterhouse, for use in a rodeo, or for any commercial purpose.

Adoptions, however, may not continue for long. In November 2003, the BLM announced that rising costs may force the program to end. Instead, horses would be kept in holding centers that are cheaper to run. It costs $445 per horse per year to keep a wild horse in a holding center, while arranging for the adoption of a single horse can run as high as $1,400, the Reno GAZETTE-JOURNAL reported.

Is there any other way to control wild horse populations other than auctions?

BLM officers also use the fertility control agent PZP (porcine zonae pellucidae), a vaccine derived from pig cells. Captured mares can be injected at close range, or a dart gun can be used for those who are still free. The vaccine is effective 90 percent of the time and, according to a 2001 study by the UC Davis Center for Equine Health, does not produce any side effects in the horses. PZP, however, requires two injections, which can make using it on an entire herd a logistical challenge. The vaccine lasts for two years.

In Montana, where CLOUD’S LEGACY was filmed, a fertility control program has been in effect since 2001. Yearlings and two-year-old mares are vaccinated every year with PZP to prevent pregnancies. In 2003, the Montana BLM began to vaccinate mares that are 14 years old or older. The office says its long-term goal is to vaccinate these animals for the rest of their lives and argues that the vaccine improves their physical condition by reducing the chances of pregnancies at an age when they are less suited to give birth.

Animal-rights activists have extended a cautious welcome to PZP. The Fund for Animals argues that the vaccine is more humane than roundups, but cautions that it should not be used to delay pregnancies in young mares.

What happens to horses that are deemed not suitable for auction?

They are either returned to the range or placed in five long-term, government-run holding facilities in Kansas and Oklahoma. Stallions are gelded and pastured separately from mares. Even here, however, horses can be adopted. Postings on state BLM Web sites often feature the photos of horses up for adoption that have been placed in permanent care. Sick, elderly horses can undergo euthanasia at three centers. Privately run wild horse sanctuaries are another alternative.

Officially, no. Currently, the bureau estimates that there are some 45,000 horses in the wild, about half of them in Nevada. By comparison, a century ago, some 2 million horses roamed the Western ranges. The BLM puts the optimal number of horses on the Western ranges at 25,000. Worried by the large costs of the adoption program (which takes up nearly a third of the annual BLM wild horse budget of $11.6 million), the BLM wants to reduce the number of wild horses on the Western ranges by half and is also reconsidering its adoption program. Equine population experts worry that reducing the number of horses in the wild could lead to a loss of genetic diversity and, ultimately, the eventual extinction of this living legend.