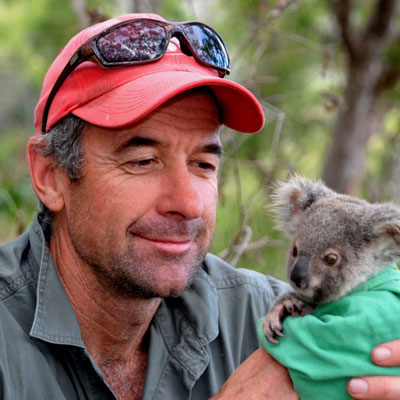 An interview about koala communication, vocalization, and social structure with Dr. Bill Ellis, who serves as head of The University of Queensland’s Koala Ecology Group.

The vocalizations we observe in the film seem to be mostly about aggression. Do koalas make any comforting vocalizations? Or, if not, is there another way they address this?

The koala bellow sounds aggressive, but in reality we think it has a lot to do with males attracting females in the breeding season. Our tracking data for wild koalas shows that females seem to respond to calls when they are looking for a mate. In addition, when young koalas are separated from their mothers, they will make a small cry – it is a sort of “yip” noise – and the mother will respond and come and collect the joey.

In what ways do the vocalizations of male and female koalas differ?

Both male and female koalas can bellow, and we are yet to work out exactly what the purpose of the female bellow is. Also, when in distress, both males and females can let out high-pitched squeals or screams, but other koalas do not seem to respond to these noises.

Could you give us some insights into what you are learning about koala social structure? Most of what we learn in the film is about males. What about females? Do they make social connections? Do female joeys leave their mother’s territory like the young males do?

Female joeys do leave their mother’s home range, but often they will be found to have returned: the overlap between mother – offspring pairs is greater in proportion than any other pairs of koalas in an area. Koalas are essentially solitary – they don’t seem to form pairs or groups and don’t seem to recognize other animals other than by their bellow or when they are up close. We know that female koalas mate with different males each year and that even the biggest of the males will only sire up to three offspring in a season, so the idea that there is a single male dominating breeding is a bit off the mark. We think that this is explained by the dominance structure changing throughout the breeding season – males don’t spend long at the top. But, we have to study this – and that is what we are doing now.

What happens when former members of a family group encounter each other – a mother, for instance, running into one of her grown joeys?

We are not 100% sure why, but females seem to tolerate their female offspring within their home range – they share more trees and have a larger area of overlap in ranges. This doesn’t seem to apply to their male offspring, although our data show that over a long period (e.g. 10 years) you will find as many large males on a site that were born there as there are immigrants. This might also explain the breeding results we found: if the females are able to recognize males they are related to then perhaps they do not breed with them.

What’s the most interesting or surprising thing you have observed during your research?

Finding that females breed with a different male each year, and finding that non-residents (travelling males) sire so many young at any site. Prior to this it was thought that the “Alpha male” dominated all breeding at a site, but our parentage analysis showed otherwise. Bill Ellis (BSc (Hons) ANU, M. Env. Law (ANU), PhD (UQld)) is a postdoctoral researcher at the University of Queensland and CQ University. His PhD project addressed the physiological responses of koalas to drought and disease but his primary research sites now are the central Queensland islands, where he is investigating communication and spatial and breeding dynamics of koalas. Bill was the Clarke Endowed Conservation Post Doctoral Fellow at the San Diego Zoo between 2006 and 2011 and is currently leading the Koala Ecology Group at The University of Queensland. Bill has been studying and working with a range of species including koalas for over 20 years and has published some 40 scientific papers on a range of aspects of koala biology including disease, reproduction and spatial dynamics.