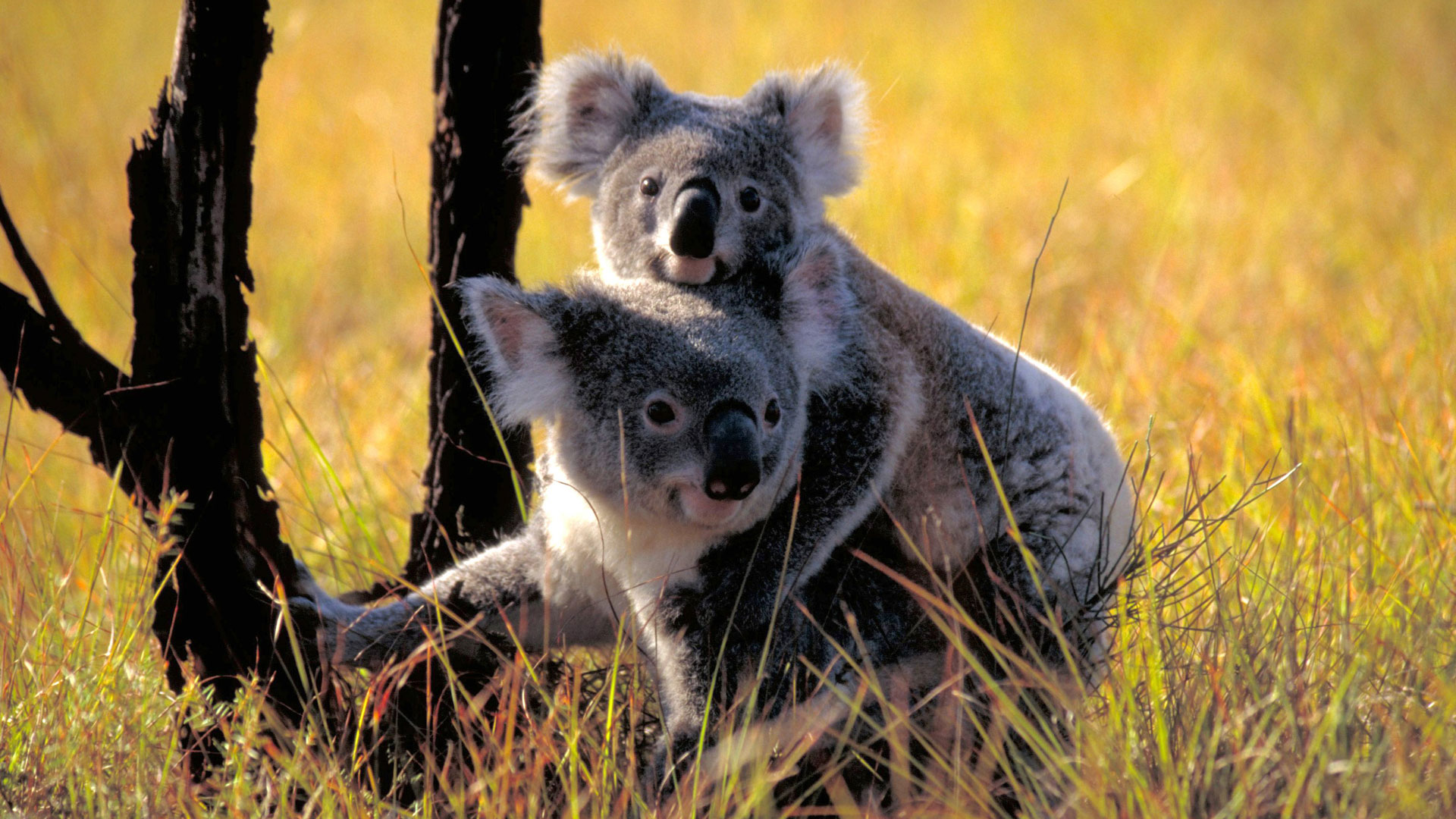 Size and weight: Koalas average 27-36 in (70 to 90cm) in length and weigh anywhere from 9 to 20 lbs (4-9 kg). Females tend to be both slightly smaller and slightly less heavy than males.  Southern koalas are approximately 30% larger than their northern counterparts. This size difference is most likely an adaptation to deal with colder climates in the south.

Physical Features: Although commonly referred to as bears, koalas are actually marsupials—an infraclass of mammals most commonly known for their pouches. Immediately after birth, underdeveloped newborns migrate to these pouches, or marsupiums, where they will continue to feed and grow for the next several months. Many marsupials have pouches that open upward, toward their heads, but the koala’s pouch opens out toward their hind legs.

Koalas are arboreal (tree dwelling) marsupials and have a number of adaptations advantageous to tree living. Their bodies are lean with long, muscular front and hind limbs and large, sharp claws to help with gripping tree trunks, and rough skin on the bottom of its feet to provide friction good for climbing. The koala has five digits on their front paws, two of which are opposable (this would be like a human having two thumbs). This evolutionary adaptation allows the koala to grip branches as its moves from tree to tree. Its hind paws have one opposable digit with no claw, again for grip, and its second and third digits are fused into one double claw the animal uses for grooming purposes. Its fur is thicker on its rump to provide cushion when sitting on branches.

Lifespan: Koalas generally live an average of 13-17 years and females often live longer than males, whose life expentency is often less than 10 years due to injuries during fights, attacks by dogs, and being hit by cars.

Diet: Koalas are folivores (leaf eaters) and subsist primarily on eucalyptus leaves, though they will occasionally eat non-eucalypt plant species. They eat approximately a pound of leaves daily and rarely drink, obtaining water from its leafy diet. Though there are well over 600 species of eucalypt, koalas will often eat from only a handful of eucalypt species, often specific to the region. Eucalyptus leaves are highly toxic to most mammals, but koalas have digestive systems specially adapted to detoxify the poisonous chemicals in the leaves. They are the only known mammals other than the Greater Glider and Ringtail Possum that live on a eucalypt diet.  Due to the high energy expenditure required to digest their food, which is high in fiber, low in nutrition, and also toxic to most animals and the species low metabolic rate, koalas spend anywhere from 18 to 20 hours of their day sleeping. Koalas are nocturnal and do the vast majority of their eating at night.

Geography: Koalas are native to Australia and are found in the eastern and southern regions of the country. The majority can be found in the four Australian states: South Australia, Victoria, Queensland, and New South Wales.

Habitat: The species lives in tall eucalypt forests, low eucalypt woodlands, as well as coastal and island woodlands. Koalas are primarily found on the Eastern and South-Eastern coastline of the Australian continent.

Breeding and Social Structure: Koalas are generally solitary animals and live in well-defined home ranges. Each home range is often controlled by a single alpha male, with a number of females also living inside that area, These females will mate almost exclusively with the dominant male, who will defend his territory against outside males that may move into the area. Females generally want to reproduce with the largest male, and rely on male vocalizations to assess the potential mate’s size.

Although home ranges may overlap, koalas are mostly solitary animals that avoid confrontations and interactions whenever possible. When males aren’t bellowing to attract mates, communication through sounds and scents is often meant to alert wandering koalas of their presence and prevent encounters. Males are generally more vocal than females, but females will communicate vocally with their young, and both sexes make a variety of noises when in distress.

The koala gestation period is only 34-36 days. The joey is born blind, furless, earless, and only about an inch long. Immediately after being born, it crawls up from the birth canal into the mother’s pouch. There, the joey attaches to one of two teats, and will not emerge from the pouch for approximately six months. After six to seven months of feeding solely on milk, the joey starts consuming its mother’s protein-rich pap, which inoculates the baby’s gut with the necessary microbes for eucalypt digestion. At about 12 months old, the young koala no longer drinks milk or fits in its mother’s pouch. If the mother breeds again, her mature joey will strike out on its own once its younger sibling appears outside the pouch. Female koalas do not always reproduce annually, in which case, the yearling joey may stay with its mother longer. Once independent, the joey remains near its mother’s territory before claiming its own. Koalas become sexually mature at around two or three years, but non-alpha males are far less likely to breed successfully..

Risks: Native predators include goannas, dingoes, predatory birds and pythons. However, human activity poses the most risk to koala populations. Humans hunted koalas for their pelts until koala hunting was outlawed in the late 1930s. Today, koalas face excessive habitat loss due to urban and agricultural development in the region, forcing them to live in smaller areas and closer to human populations. As many as 4,000 koalas are killed each year by run-ins dogs and cars. Isolated populations inbreed, making the animals more susceptible to disease,

Chlamydia is common in koalas, but more likely to develop into dangerous infections when the animals are vulnerable or stressed. Conjunctivitis, caused by chlamydia, can cause pneumonia, blindness, and infections of the reproductive or urinary tract.

Koala Communication: An Interview with Dr. Bill Ellis
Clip | A Battle for Territory
Clip | A Koala Roams the Suburbs
Clip | Preparing for a Eucalyptus Diet
Cracking the Koala Code - Preview