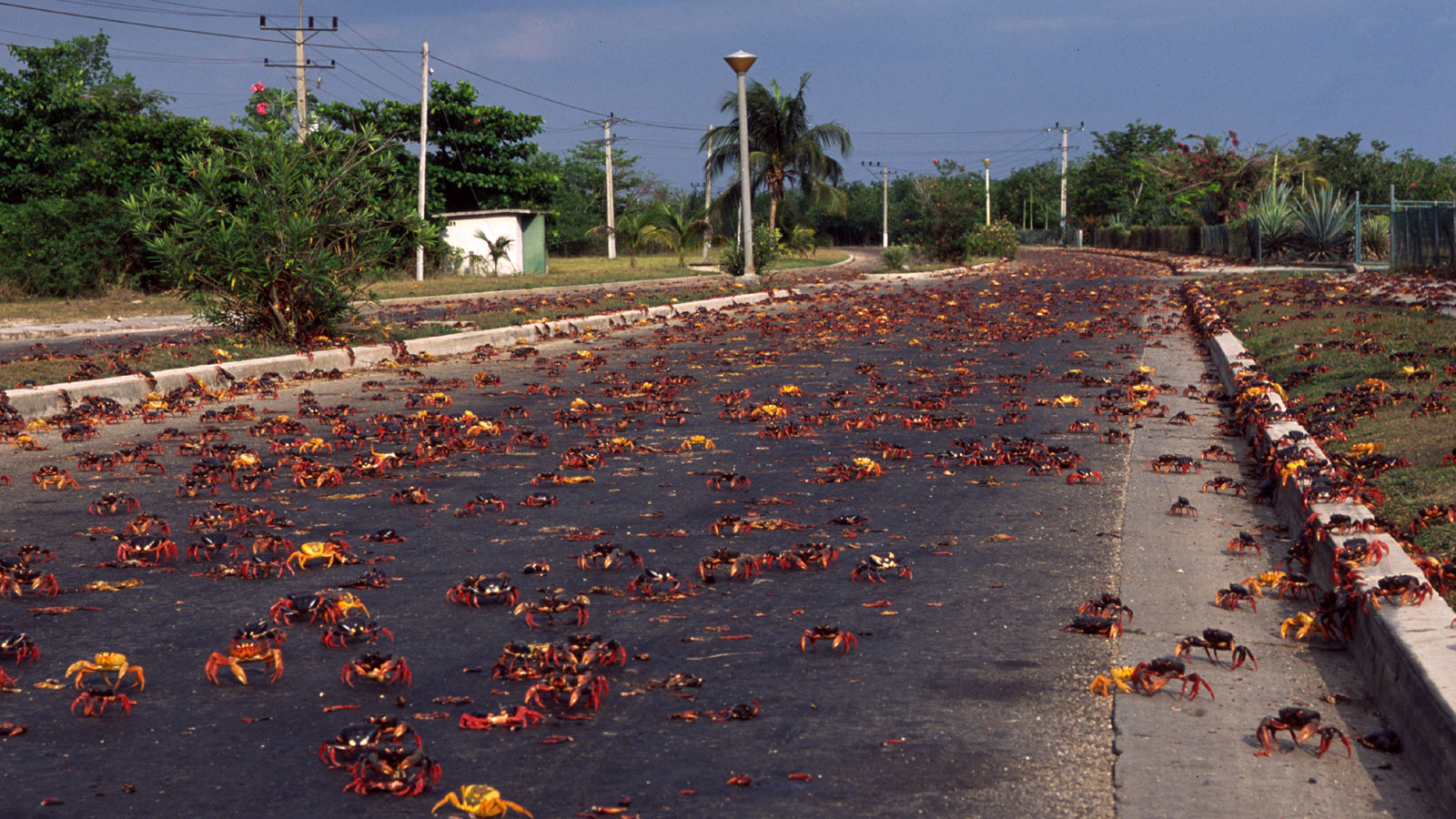 Each spring millions of small reddish land crabs emerge from the moist forests surrounding Cuba’s Bay of Pigs to breed in the nearby sea. As NATURE’s Cuba: Wild Island of the Caribbean shows, the evening invasions — which last for weeks — can wreak havoc on ordinary life. Roads become covered with smelly smashed crabs, while car owners must repair tires shredded by the sharp shells.

The crabs and their eggs do provide a feast for birds, fish, and some hungry mammals. But seafood-loving Cubans won’t touch them — they contain a harmful toxin.

More than four million years ago, the ancestor of these crabs — known to scientists as Gecarcoidea — lived in the sea. Slowly, however, they evolved to survive in a foreign place: the shady forest floor. But, like marine crabs, red land crabs still breathe with gills that must remain moist. To stay damp, the crabs dig tunnels. During the spring rains, males and females seek each other out and mate.

A few weeks later, the female crabs, swollen with eggs carried in a pouch, head for the nearby sea. The journey, which may be as long as six miles, can take days. And there are plenty of obstacles, such as roads, curbs, and even coastal resort swimming pools. On sunny days, the crabs must find shade — or dehydrate and die.

Those that reach the sea face one last challenge — laying their eggs while avoiding being swept back into the water. These crabs are true land creatures and cannot survive in the sea. Once the ripe eggs are successfully released into the water, they hatch immediately. After a few weeks, the baby crabs climb back onto land and head for the forests, to begin the cycle anew.

Cuba isn’t the only island to experience crab invasions. Related land crabs live throughout the Caribbean. And a similar species takes over Christmas Island in the Indian Ocean each fall.

There, an estimated 100 million red crabs move to the shores for a little romance. The males go first, taking up to several weeks to reach the surf, where they tenaciously fight for the best territory. The females follow, to mate with the males, and several weeks later are swollen with eggs. As on Cuba, the eggs hatch on contact with water, and the baby crabs make the return trip to the forests a few weeks later.

On both islands, officials make efforts to protect the crabs by closing some roads and sidewalks to create “crab crossings.” In part, that’s because the great crab migrations have become an unusual tourist draw. For some people, a glimpse of thousands of crabs scrambling into the surf is an unforgettable sight of a lifetime.