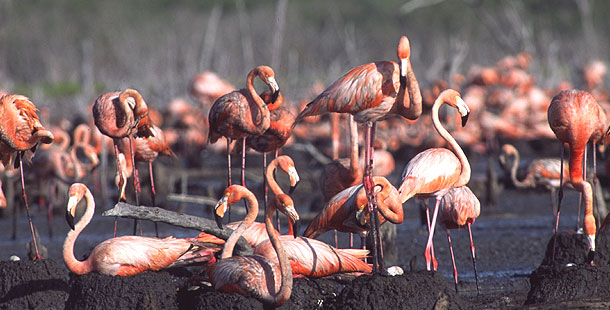 Cuba is a place teeming with wildlife, more animal and plant species than anywhere else in the Caribbean. Discover Cuba’s animals, some of which are endemic.

Believed to be the world’s smallest bird, Cuba’s native bee hummingbird buzzes around forests and field edges in many parts of the island, where it feeds on flower nectar. It grows to about 2 inches long and weighs less than an ounce, or less than a dime. Some locals call it “zunzun,” and believe it is a symbol of love. Birders from all over the world travel to Cuba in hopes of catching a glimpse of this tiny bird.

Cuba’s caves are home to many kinds of bats. But perhaps the best known is the butterfly bat, one of the world’s smallest. It has a wingspan of just 5 inches and weighs less than an ounce. It spends much of its time hanging around in dark, humid caves, but takes flight each evening to hunt for insects.

Caribbean flamingos are found in the Caribbean, parts of Central and South America, and the Galapagos Islands. The bird likes lagoons, muddy flats, and shallow lakes, and prefers saline water. These highly social birds reproduce in large colonies of several thousand individuals. Flamingos lay one white egg on top of the nest, a large mud mound with a concave top. Female and male flamingos take turns incubating the egg for about 28 days. Parents feed their chick with “milk,” a liquid secreted from the upper digestive tract. Flamingos eat small crustaceans, mollusks, algae, insects, and occasionally fish. They use their lamellae, a comb like filter in their bill, to sift food from water. Flamingos’ pink color comes from the carotenoids in their food. The Caribbean species, the brightest of all flamingos, perform displays such as wing salutes, twist-preening, and head flaggings in groups in order to synchronize breeding in a colony.

Found from Florida to Brazil, the Caribbean reef shark is a regular visitor to Cuba’s waters. Usually shy, reef sharks can become bold when fed by divers or anglers. They can smell a bleeding fish from great distances, and use other senses to home in on the vibrations and electrical fields created by prey and other living beings. The reef shark can grow to 9 feet in length.

Cuban brown anoles are native to Cuba and throughout the Caribbean. They have been recently introduced to Florida, Georgia, and Hawaii, probably as stowaways on planes and ships. Brown anoles consume a wide variety of insects. Brown anoles breed every 1 to 2 weeks during the summer months. Males bob their heads when they are ready to breed; the female cocks her head so that a male can crab her with his mouth. About 2 weeks after mating, the female will lay one egg at a time, reaching a total of about 15 to 18 eggs over the breeding season. Eggs are buried in the warm, moist earth and hatch 6 to 8 weeks later. Brown anoles vary in color from gray to black, but females have a white stripe and a distinctive triangular pattern on their back. These lizards have a colored fold of skin on their neck called the dewlap. Male brown anoles spread their red-orange dewlaps during territorial aggression and courtship interactions.

Once also found on other islands in the Caribbean, this rare crocodile is now limited to Cuba, where it lives in dense swamps. It can grow up to 13 feet long, and typically feeds on fish and crustaceans. It can also “leap” high out the water, with a push from its powerful tail, to grab hutia from their treetop perches. Biologists believe that fewer than 6,000 wild Cuban crocodiles remain, although others are raised on farms for their meat and hides.

Cuban emerald hummingbirds are found in forests, coastal vegetation, and gardens in Cuba and the Bahamas. The Cuban emerald is bigger than its cousin, the bee hummingbird, and as a result feeds on a much larger array of blossoms. Because of this size difference, the two species have avoided competing with each other for food. Like other hummingbirds, male Cuban emeralds are smaller and more colorful than the females. Hummingbirds are the only birds in the world that can fly backwards, and their wings flap at 15 to 80 beats per second. Because hummingbirds sip from so many different flowers on any given day, they are integral to the process of pollination.

Found on Cuba and nearby islands, this small, hairy-tailed rodent is an accomplished tree climber. It has 5 strong claws on each foot. But it spends plenty of time on the ground too, foraging for leaves, bark, small lizards, and insects. This food goes into an amazing 3-compartment stomach able to digest just about anything! Hutias typically prefer dense forests, and can live for up to 11 years in captivity.

Cuban parrots are found in eastern and central Cuba, in the Cayman Islands, and in the Bahamas. They eat a variety of fruits and vegetables, as well as flowers and seeds. Cuban parrots have iridescent green feathers edged with black; the forehead, crown, and areas around the eyes are white; the cheeks and throat are red. Parrots mate for life and use the same nesting sites, typically holes made by woodpeckers or limestone cavities, year after year. These birds are known for their loud, raucous calls, especially during flight. The parrot is an endangered species throughout its entire range due to poaching and habitat loss.

Todies defend a tiny patch of forest, rarely leaving their wooded and semiwooded territories. They are endemic to Cuba and are known on the island as “cartacuba.” Female todies lay 3 to 4 eggs between the months of March and June. Parents feed their chicks up to 140 insects per day — making these young birds among the most frequently fed chicks in the world. Todies snatch caterpillars, spiders, and other kinds of insects off leaves. There are only five species of tody in the world, and all of them are found on Caribbean islands. The Cuban tody is the most colorful, with a blue throat, pink flanks, a yellow underbelly, and a green body. These birds dig tunnels in embankments or in hollow tree trunks for nests. The tunnel’s walls are covered with a sealant — a mixture of grass, lichen, algae, and feathers.

The Cuban trogon is the national bird of Cuba and is found all over the island. These birds like wet and dry forests of all altitudes, and prefer the shade to the sun. They eat mostly flowers, fruits, and insects — and they can hover while feeding. Instead of building its own nest, the Cuban trogon occupies abandoned woodpecker holes or other preexisting crevices in trees. This colorful bird measures 10 to 11 inches from beak to tail. Trogons typically have a red belly, a green-colored back, a white underside, and a long fluffy tail. Locally the bird is referred to as the Tocororo, or Tocoloro, names derived from the sound of its call. Trogons usually travel in pairs, and their flying style is rather inelegant: with choppy, short flaps of their wings, they make considerable noise.

The Northern Hemisphere’s smallest frog has no common name and hops around the moist forests and swamps of Cuba’s Monte Iberia. It tends to be nocturnal and feeds on insects at night. Discovered in the 1990s, the tiny amphibian fits neatly on a dime — and its name, when typed out, is actually longer than the frog itself! Researchers say the discovery shows that many Cuban species remain to be classified. Perhaps there is even a smaller frog somewhere on the island.

Goliath groupers like coral reefs, rocky ledges, and deep holes where they can hide. The fish range from the coast of the Carolinas through Florida and the Gulf of Mexico. The goliath grouper spawns during the summer months. These fish feed on crustaceans, especially the spiny lobster, and other fish. They use their sharp teeth to seize their prey, which are swallowed whole. This critically endangered fish is aptly named for its size — it can reach lengths of at least 8 feet and weigh up to 800 pounds, through most observed today are significantly smaller. To locate other groupers or to ward off enemies, the fish produce a rumbling sound that travels great distances underwater. Goliath groupers can live between 30 and 50 years and scientists believe the fish may change sex as they mature.

Although many of Cuba’s caves are dry, some are filled with fresh or brackish water, providing a home to several kinds of this unique cave fish. Adapted to the dark, the four species of Lucifuga fish found on Cuba have no eyes, and their skin has lost most pigment. As a result, Lucifuga can look like a ghost fish swimming through ink-black water. Sensitive to light, it often flees when approached by divers with bright flashlights.