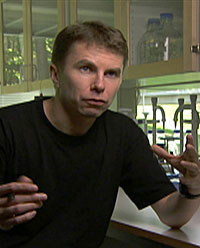 Molecular biologist Peter Savolainen of the Royal Institute of Technology in Stockholm, Sweden, and his colleagues have studied the origins of domestic dogs using hair samples and mitochondrial DNA. Mitochondrial DNA is found outside the nucleus of cells in small bodies called mitochondria, which provide energy to cells. Unlike regular DNA, they are passed on only from mother to child. Over successive generations, mutations will build up in the mitochondrial sequences, and so by studying the variability of mitochondrial DNA in various individuals, scientists can construct trees (called phylogenetic trees) that illustrate the genetic relationships of the individuals, and give an approximation of when they branched off from a common ancestor; more variability means a more ancient origin.

In a paper published in November 2002, the researchers revealed the results of mitochondrial DNA analysis of 654 domestic dogs representing domesticated dogs from Asia, Europe, Africa, and arctic regions of North America. The greatest differences in the sequences turned up in samples from East Asia, which meant dogs had been domesticated there the longest. The domestic dog, Savolainen concluded, probably evolved in East Asia-perhaps as recently as 15,000 years ago-spread across Asia and Europe, and then traveled to the New World with migrating groups of humans.

Q: Why were you interested in dog genetics in the first place?

It started in 1993 when I did my Master’s thesis work on human DNA analysis at the government forensic lab in Sweden. I was setting up the first analysis in Sweden for that. People there thought that they’d like to have some dog samples analyzed for forensic purposes, because there had been some important murders in Sweden that were unsolved, and one of the few clues were some dog hairs on the corpses. It was two murders and the police wanted to know if it could be the same murderer. That was the start of my Ph.D. studies. It was a cooperation between my school and the forensic lab. I set up a method for analyzing dog hairs. This was the first analysis, I believe, of any animal sample ever done.

Yes, it worked. It looked like the hairs had come from the same dog. A few suspects owned dogs, and we tested the dogs, but they were all excluded. Nothing more came out of it until just two years ago, when the murderer was caught for some other reason; however, the dog was dead and buried so we couldn’t check its DNA. That is how it started.

Q: Why focus on mitochondrial DNA?

Because we were looking at hairs. Normally, nuclear DNA works very badly with hairs, so you have to go to mitochondrial DNA. Nuclear DNA is good because it can give you a definite identification and you can’t get that with mitochondrial DNA, but it gives you something.

Q: Why did you expand that to look at the evolution of dogs?

At that time I had no knowledge at all of population genetics, but just looking at the data, I thought there was more we could do with this, that we could say something about dog history and origin. When I did my research for the first forensic study, I tried to look in the literature for the history of dogs so I would know what DNA variation to expect. I read a lot of books about the history of dogs, but got more and more frustrated. There were meters on the bookshelf written on the history of dogs, but it was based on almost no hard facts. There was also bad information from archaeology, so I saw that we needed to do this for the community. At that point I started to try to collect samples on a larger scale, from around the world.

Q: How did you decide which dog breeds to look at?

What I learned through my contacts around the world, collecting dog samples, was that the concept of dog breeds was something European, in Europe and North America. In other parts of the world, you don’t necessarily have “breeds,” and covering breeds was not of direct interest to me. What I was after was as good a sample as possible from each part of the world, of what could be supposed to be the original dog population in each part of the world, so that I could compare these samples with each other.

Q: Does your data show which dogs are the most ancient?

My data is only about the first origin of dogs-where and when they evolved and in how many different places. We could show that it probably happened only once and that it happened somewhere in East Asia. All of the types of “ancient” dogs have only one single common origin from the wolf.

Q: What would have been special about East Asia that might have caused this to happen?

I don’t know so much about that, but one thing is that southern Asian wolves are generally smaller than north Asian and European and North American wolves, so perhaps they were easier to handle. There have been theories that the dog would have come from somewhere in the Middle East, because these wolves are smaller, but wolves are approximately the same size across south Asia, across India and southern China. I can’t say that I have any good idea why it happened just there. Perhaps it was just chance.

Q: Did the results surprise you?

I am open-minded. Many people thought that the dog should have come from the Middle East, for example, but that was based on very little fact. I could have expected more or less anything.

Q: Have you pinned down the date of domestication any more specifically?

With the data we have, we can’t pin down a certain date. It is impossible. However, we have more data coming, and we believe that we will be able to give a better date. With DNA data, you can never get a very specific date because the errors in the measurements are so big. You can only say something plus or minus 5,000 years, for example. So for the exact dating you have to rely on the archaeological data, and that tells us that the dog seems to have evolved 10 to 15,000 years ago, and what we can say is that the DNA data doesn’t contradict that.

Q: Have you expanded the study?

We are working on a new study and have more samples from everywhere, which means that we can say more detailed things.

Q: How many more dogs?

In the old study we had 654 dogs, from our own work and from the literature, and now we are working with 1500 dogs, with samples collected worldwide. Because we have a more complete sample, I am more certain about the results than I was in 2002.

Q: Not everyone agrees with you….

No, but that’s because they haven’t seen the new data. I think it will be convincing. There can always be disagreement, but now we can be more certain that the data are correct. We should be publishing it this year.

Q: Do you plan on additional studies with more samples?

We have already gotten samples from dogs from around the world so we can do more specialized analysis of, for example, African dogs, so we can say in more detail how and when African dogs came to Africa. I have tried to work from the basic questions up to the more specialized ones; I started with where and when the dog originated, and now I want to answer how did the dog spread from this East Asian origin to other parts of the world, and then also how the first different types of dogs evolved. We have started to look at that, and we are also trying to get a good sample of every kind of breed.

Q: Will you be using the database for forensic purposes?

I haven’t done any forensic cases for a few years because I have been focusing on dog history. But we could use our population data to say that this type that we found in a specific sample is so common in the dog population, we have found it in so-many German Shepherds but not in any poodles, so the hair probably comes not from a poodle but from a German Shepherd. The more data we have the better answers we can give to the police.

Q: Do you plan to study the domestication of other animals?

If nobody else does cats, I guess I will have to do it. I have done a few studies on other animals — for example, I was involved in a Chinese study on the origin of the yak — and we are planning to take a look at the domestication of horses also. But I think we have a lot to do for at least the next five years with dogs.

Hippos: Africa's River Giants
Running With The Herd: A NATURE Short Film
Voyage of the Lonely Turtle
The Beauty of Ugly
The Whale Detective
Deep Jungle: The Beast Within