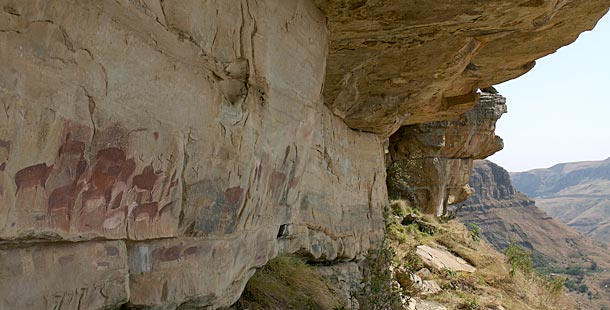 At the base of immense rock faces high in the Drakensberg, the passing of centuries and a slow process of weathering have caused the sandstone walls to gradually fall away, forming overhangs and shallow caves. In Drakensberg: Barrier of Spears, these hollows serve as shelters for chacma baboons patiently waiting out a rainfall. They overlook a dramatic landscape, where miles of waving grassland stretch out into the distance. On clear days, the passing sun plays upon these rock walls, where painted figures bear witness to the existence of a people who once called these mountains home.

They are the San, hunter-gatherers who are believed to have lived in this area for 4,000 years, as far back as the Stone Age. Though the San people once lived throughout Southern Africa, Bantu-speaking people migrated into the region in the 13th century, and the San retreated into the valleys below the Drakensberg, where the rock overhangs would have provided shelter from the elements.  Subsequently, with European colonization, white farmers appropriated more and more of the remaining land.  The sparse historical record suggests that the San people tried to adapt, forming alliances with some of their new neighbors and stealing horses from settlers. But by the end of the 19th century, the San disappeared from the Drakensberg.

What they left behind is the largest collection of rock paintings in Africa south of the Sahara,  with the oldest known paintings dating back about 2,400 years.  Among the hundreds of rock shelters in the Drakensberg there are literally thousands of individual rock paintings, with animals, humans, and inanimate objects drawn in black, white, red, orange, and yellow.  Many of the rock faces where the art has been found have several layers of paintings superimposed on top of each other.

Among the animals represented in these paintings, eland are given a prominent role. Horses, cattle, dogs, sheep, baboons, wild pigs, elephants, snakes, birds, and other animals are also depicted, though much less often.  Both the quantity and quality of the eland paintings are remarkable, suggesting they were very important in San culture. While paintings of eland outnumber those of every other animal,  they are not thought to have been as abundant in the wild as these representations suggest.  While most other animals are regularly depicted in a single color – usually red or black – most of the eland are painted in combinations of several colors, often using sophisticated shading techniques.  Because the white pigment deteriorates quickly, many of the eland appear without heads or legs.

Most of the people shown in the paintings were painted in a single color, usually red. While the majority of the figures appear to be naked, only a small number show obvious indications of their gender. Sometimes the figures wear clothing hanging from the shoulders. Children appear only very rarely, most often carried on the back or held in the arms of other figures.

Some of the paintings depict hunters with bows and arrows or spears in the pursuit of an eland herd.  In the most recent paintings, San are shown mounted on horses, the advent of which would have revolutionized their hunting strategies.  But other paintings suggest that the San also relied on plant-foods. Some of the figures are depicted with food sacks on their backs and digging sticks in hand. Underground tubers along with seasonal fruits could have supplemented their diets.

Other conclusions are more difficult to draw based on the painted evidence. In some of the more obscure scenes, red lines like ropes – often dotted in white – extend away from human figures. Sometimes these lines connect to eland, sometimes they meander through a herd.  Could these scenes be representations of some kind of magic or spiritual encounter? Some questions about the lives of this lost group of people may never be fully answered.

Since at least the mid-1800s, archaeologists and artists alike have attempted to copy the paintings from the Drakensberg rock faces,  to bring them out of the mountains as photographs or tracings. But how much of their essence gets lost in translation? Vandalism and normal weathering continue to take their toll on the paintings.  It is suggested, based on known rates of deterioration, that most of the rock art remaining in the Drakensberg belong to the last 1,000 years – if not the last few centuries.  One day they may disappear completely, like the people who created them. For now, however, this remarkable artistic legacy offers a glimpse back in time.

Drakensberg: Barrier of Spears - Preview
Where Did These Mountains Come From?
Interview: Filmmakers Lynne and Philip Richardson
Did you watch “Drakensberg”? Tell us what you think!
Additional Web and Print Resources

Nature's Perfect Partners
Salmon: Running the Gauntlet
Braving Iraq
John Denver: Let This Be A Voice
In the Valley of the Wolves
Viva Puerto Rico