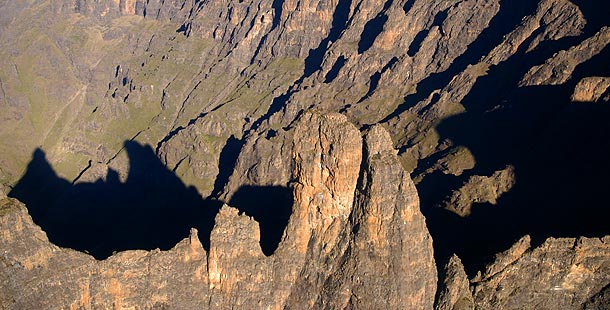 The Drakensberg mountain range extends more than 600 miles across Southern Africa.  It encompasses massive sandstone buttresses, grass-covered plateaus, and cathedral-like rock towers that have earned these mountains their Zulu name, uKhahlamba, “barrier of spears.”  In its alpine pastures, dangerous thunderstorms can gather in a matter of moments. Not far away, the Tugela Falls plummets more than 3,100 feet into a sparkling rainbow of water vapor. The mountains’ treachery is paired with stunning natural beauty. But how exactly did these extraordinary mountains get here?

The story begins about three billion years ago, when this landmass was part of a supercontinent known as Gondwanaland. At that time, scientists believe a massive lake covered the granite foundation on which the mountains now stand.  Over the course of millions of years, runoff carried sand and mud into the lake, where it settled into sedimentary layers that hardened under the compacting weight. This process carried on until several hundred million years ago.  The youngest of these sedimentary layers now lies exposed in the cliffs at the base of the Drakensberg range.

Then, around 160 million years ago, immense pressure deep within the Earth caused Gondwanaland to begin to split apart. The slowly drifting tectonic plates would eventually form the continents of today.  In this period of great change, vast lava flows poured out through fractures in the Earth’s crust.  Sometimes, these flows hardened into layers of basalt more than 150 feet deep. Over about 20 million years, the basalt deposits grew to be nearly a mile thick over the sandstone deposits below.

When the lava flows stopped, some 140 million years ago,  the process of building this extraordinary mountain range was halted — and a slow process of wearing away began. Along the escarpment, erosion often follows fracture planes that form deep within the rock. As the rocks crumble along these planes, broad cliff faces form — sometimes extending in a straight line for many miles.   Higher still, the layers of hard basalt have long since been whittled down by time and the elements. Blocks and slabs were shorn away, then pulverized over centuries of weathering or were swallowed by the Drakensberg’s deep ravines.  Now, only towering basalt peaks remain, a chain of sentinels keeping watch over the landscape.  The debris from this long process has been churned into a black soil that supports the grasses that cover the slopes below.

With its incredible geologic history, breathtaking landscapes, and wealth of San rock art, the uKhahlamba Drakensberg Park was named a World Heritage site by the United Nations Educational Scientific and Cultural Organization in 2000.  The range now plays host to tourists who travel here to enjoy the unique vistas, rugged trails, and challenging rock climbing the Drakensberg affords.  From every vantage point, the “dragon mountains” bear the evidence of the powerful forces that have shaped them through the ages.

Drakensberg: Barrier of Spears - Preview
San Rock Art of the Drakensberg
Interview: Filmmakers Lynne and Philip Richardson
Did you watch “Drakensberg”? Tell us what you think!
Additional Web and Print Resources