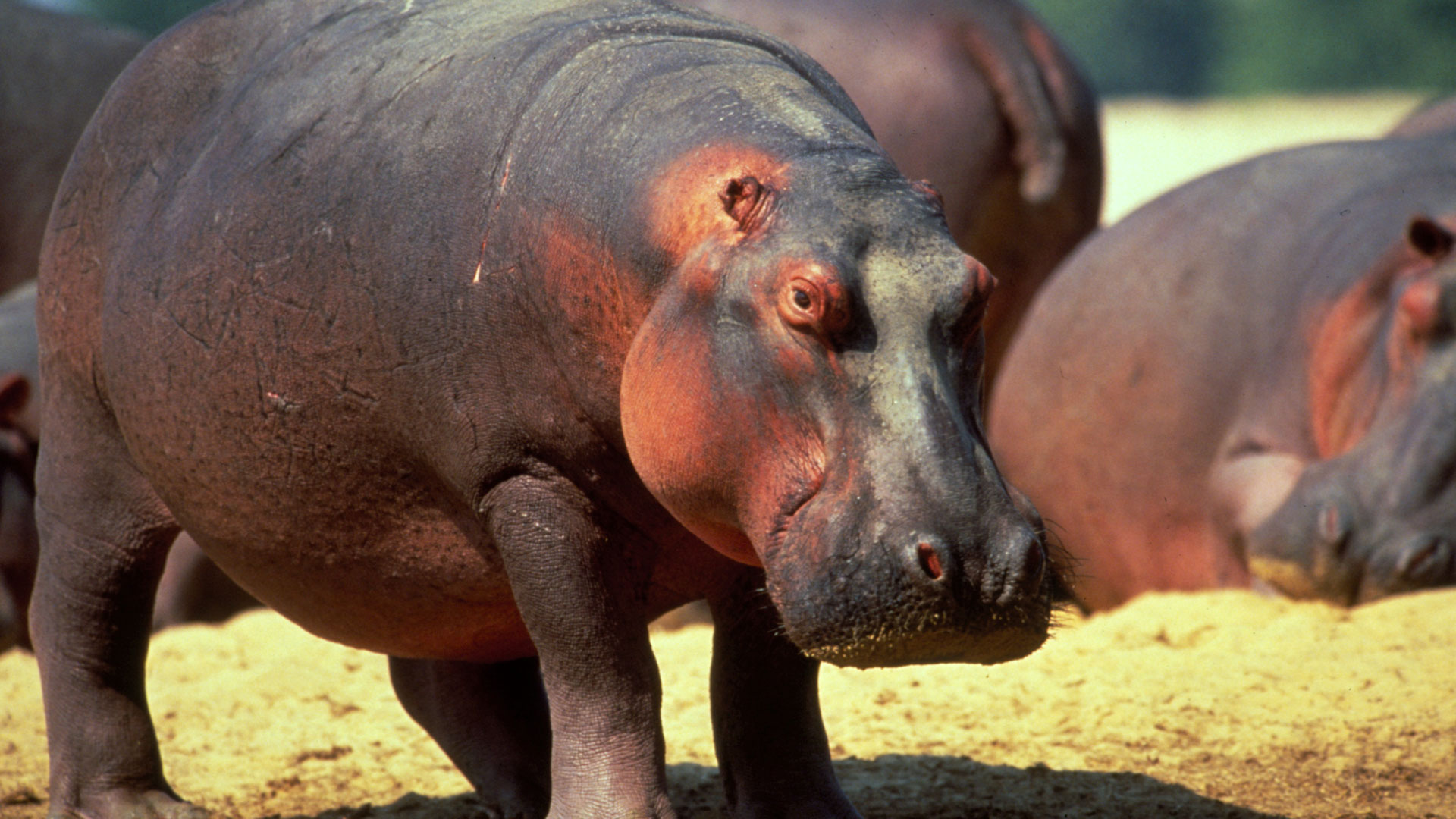 Female hippos have long been associated with a nurturing and caring nature. Much of a female hippo’s time is spent preparing for and raising her offspring. A community of females looking out for young hippos (ostensibly ruled by a dominant male) is the backbone of every hippopotamus pod. The ancient Egyptians recognized the role of the female hippopotamus and honored her as Taurt, the goddess of childbirth, protection, and mothers. Taurt has the head and torso of a pregnant hippo, the legs of a lion, and the tail of a crocodile. Amulets and statues of Taurt were thought to keep expectant mothers and infants safe. Ancient Egyptians named their children after her, and her name inspired that of the city of Thebes.

Perhaps this belief grew out of the close relationships that female hippos share with their children. A mother hippo will teach a young calf to swim and walk by her side to ensure that aggressive bull hippos cannot injure them. In fact, hippo cows will baby-sit the offspring of other mothers, a rare occurrence in the animal world.

Much of a female hippo’s time is spent preparing for and raising her offspring. But these caregivers have their own tremendous strength and capacity for ferocity. Try threatening the young of any herd — not a recommended pastime, by any means — and a cow will come charging, ready to protect the new generation with her sharp teeth and tusks. Rebellious offspring know firsthand the quick temper and violent habits of female hippos. Step out of line, and mom might slash you with her tusks, using her head as a weapon to roll you over and over. Then she becomes her old loving self again, showering licks and caresses on the now-subdued child.

The ancient Egyptians recognized this power as well: the pyramids are decorated with sculptures and drawings of the demoness Ammut. She stood by Osiris’ side, guarding the entrance to the Underworld with her crocodile snout, lion legs, and hippo hindquarters. The fate of an Egyptian’s soul lay with her: the new arrival’s heart would be weighed against a feather. If the soul didn’t measure up, Ammut (meaning the “Devourer of Evil Hearts”) would consume it, resigning its owner to eternal death. So while one hippo protects life, another one waits to judge that life, and perhaps to take it away.

In the hippo’s homeland of Sub-Saharan Africa, modern-day myths tell of Sangu, a powerful hippo goddess who demands that fishermen give her a sacrifice. If any fisherman should try to take her fish without first performing this ritual, she will attack his boat and attempt to drown him — thus returning his ill-gotten catch to her river, the Ubangi.

It’s no wonder that these gals are worshipped as goddesses: female hippos demand respect — and they get it, too! While a few dominant males will protect the territory and decide who mates with whom, the women on the inside run the show. When a male comes to call on a female hippo, he must show his submissiveness by remaining on his belly in front of her, until she decides to lie down and rest. In that case, he must then stand up to demonstrate his respect for her! Should she choose him as her mate, she visits him and receives the same preferential treatment, or he could find himself driven out by a herd of angry female hippos.

Protectors and disciplinarians, mothers and warriors, whatever female hippos may be, they play an active and essential role in the hippo world.

To order a copy of HIPPO BEACH, please visit the NATURE Shop.