Some ranchers argue that they can raise organic beef using methods that many experts say are friendlier to the environment -- and healthier for beef eaters. 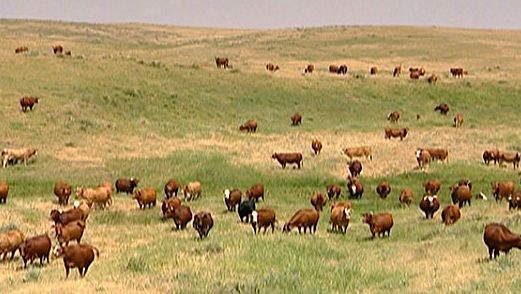 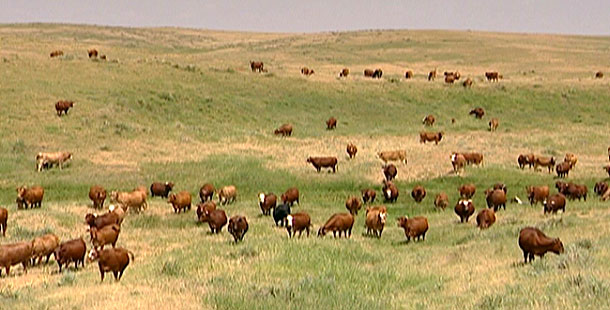 In the increasingly industrial world of North American cattle production, organic farms are the exceptions. While other farmers send their calves off to crowded feedlots to be fattened on grain enriched with nutritional supplements, a new breed of alternative rancher is keeping their young animals close at hand, to spend their final months before slaughter on the green, green grass of home.

In NATURE’s Holy Cow, viewers visit one of the leaders of the “alternative” ranching movement, Colorado’s Lasater Ranch. There, the Lasater family is demonstrating that they can raise high quality, organic beef using methods that many experts say are friendlier to the environment — and healthier for beef eaters. And although skeptics doubt that such methods will ever supply most beef to consumers, others credit ranchers like the Lasaters with demonstrating the benefits of the “grassfed” movement.

Once, all beef cattle were grassfed — spending their entire lives grazing on farm fields or prairie. These days, however, beef calves typically spend the last few months of their lives in feedlots, where they are fattened on special feed, and often given drugs to ward off disease. Mainstream producers say such methods have helped guarantee a steady, reasonably-priced stream of meat to consumers.

Critics, however, say cheap meat has come at the expense of safety. They argue that the modern approach has had dangerous consequences, such as the spread of food-borne illnesses caused by bacteria, and even deadly “mad cow disease,” a fatal neurological disease caused by eating contaminated beef. Researchers believe mad cow is spread by giving cattle feed that includes bone meal and brain or spinal cord tissue taken from other diseased cows (that practice is now banned in the United States and other developed nations).

To avoid such problems, grassfed ranchers feed their animals only pasture grass, legumes, and hay. And while just a few consumers were once aware of the existence of such beef, a series of disease scares — including the late 2003 discovery of a “mad” cow in the U.S. that led to the destruction of hundreds of animals — has helped spark greater interest.

“The silver lining in this horrible situation is that it is getting people to think about what they are eating and how it is produced,” says Marlene Groves, president of the Colorado-based American Grassfed Association, an alliance of several dozen alternative ranchers and food purveyors.

Some consumers prefer grassfed beef because they believe that the production method is kinder to the environment and more humane to animals than large-scale commercial production. But others are interested in potential health benefits. “Nutritional research shows these products to be much higher in [beneficial chemicals], and lower in fat and cholesterol,” says Groves. And grassfed consumers “don’t have to worry about E. coli contamination,” she adds. (E. coli is a common bacteria that, in some forms, can be deadly.)

Such claims have helped increase demand for grassfed products. But the ranchers still face major challenges. Many major grocers don’t carry the products, forcing consumers to order them over Web sites or through specialty stores. There are few national standards that define true “grassfed” agriculture. And, so far, grassfed methods have proven to be more expensive than competing industrialized methods, relegating grassfed beef to niche markets.

Still, Groves is optimistic. “I think this may be the beginning of a revolution where people examine the evidence and make better choices for themselves and their families,” she says. “Ultimately, I believe this movement will benefit independent family producers, such as grassfed producers, who are more closely connected to the food they produce.”

The Elephants of Africa
Touching the Wild
Equus "Story of the Horse" | Episode 1: Origins
My Congo
Deep Jungle: The Beast Within
Super Cats: Episode 1 | Extreme Lives