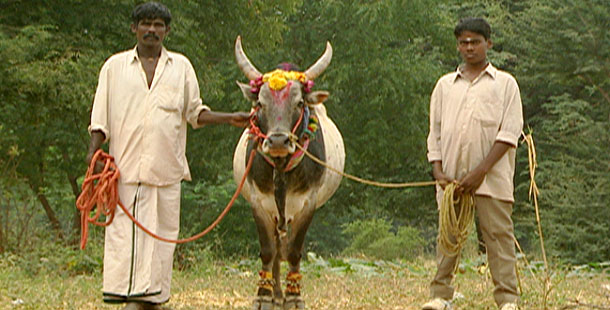 It’s becoming a routine ritual on the crowded, colorful streets of Delhi, India: A small team of men surrounds a wandering cow, attempting to coax it on to a waiting truck for a trip to a suburban reserve. But the cow catchers need to be careful: To India’s millions of Hindus, the cow is a holy animal that cannot be harmed.

The tender treatment is just one example of our complicated relationship with cows — a historic partnership detailed by NATURE’s Holy Cow. From a source of meat and milk to a provider of labor and religious inspiration, cows often play a central role in modern life.

Few people, however, revere the cow like the world’s 900 million adherents of Hinduism. Since the faith first evolved near Asia’s Indus River more than 3,000 years ago, respect for animal life has been a central theme in Hindu life. While many scholars say early Hindus ate beef, most ultimately came to see the cow as a sacred animal to be esteemed, not eaten. “If someone were to ask me what the most important outward manifestation of Hinduism was, I would suggest that it was the idea of cow protection,” Mahatma Gandhi, India’s legendary nonviolent leader, once wrote.

Although Hindus follow no single set of rules, reverence for cows can be found throughout the religion’s major texts. Some trace the cow’s sacred status back to Lord Krishna, one of the faith’s most important figures. He is said to have appeared 5,000 years ago as a cowherd, and is often described as bala-gopala, “the child who protects the cows.” Another of Krishna’s holy names, Govinda, means “one who brings satisfaction to the cows.” Other scriptures identify the cow as the “mother” of all civilization, its milk nurturing the population.

Today, in heavily Hindu nations like India and Nepal, milk continues to hold a central place in religious rituals. And in honor of their exalted status, cows often roam free. Indeed, in some places, it is considered good luck to give one a snack, a bit of bread, or fruit before breakfast. On the other hand, a citizen can be sent to jail for killing or injuring a cow.

But as cities have grown more crowded, cow-friendly policies have posed problems. Delhi’s 13 million residents, for instance, share the streets with an estimated 40,000 cows — leading to some complaints. One is that the grazing cows spread trash as they rip open garbage bags in search of tasty morsels. Another is that they dangerously snarl traffic.

“What is the greatest traffic hazard in Delhi today? Cows,” Bibek Debroy, a columnist for India’s Financial Express, wrote in a pointed 2003 essay. “As our national animal, the tiger may be close to extinction. But the cow is very much around and many soon become our new national animal.”

To solve the problem, Debroy offered one tongue-in-cheek solution. “Let them have reflectors and, if not license plates, at least identity cards. Only genuine Delhi cows should be eligible for social security and other benefits.”

City officials, meanwhile, have adopted a different approach: the cow catchers. Under pressure to reduce cow populations, Delhi has hired nearly 100 of the urban cowboys, who are charged with catching and shipping cows outside the city limits, sometimes to special reserves where the animals are cared for.

But the work isn’t easy. And it can be downright dangerous. The cows often sport sharp horns, and life on the street has made them savvy and sometimes ornery. Some can recognize the sound of the transport trucks and perform a kind of bovine ballet to avoid the catchers. Still, city leaders say they won’t give up until the vast majority of the cows have been moved. Skeptics note that some of the animals return to their home turfs within days of being moved.

Meanwhile, some of India’s Hindu politicians are relying on cows to bolster their support. They have proposed new cow-protection ordinances, and vowed to ban butchers from Indian stores. Critics say such proposals go too far, and would violate India’s commitment to religious tolerance — and the nation’s constitution. But if cows could vote, they’d surely be in favor.

More From Holy Cow (6)
Explore more from this episode More