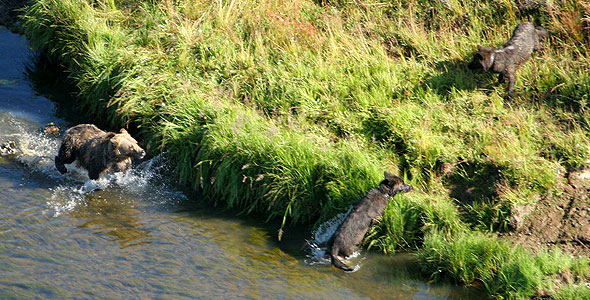 Although the gray wolf remains an endangered — and therefore protected — species, wolves nevertheless face the same risks as any other animal species. Outside Yellowstone National Park, humans continue to be the greatest threat to the wolf; ranchers may kill wolves that attack their livestock, and hunters shoot them for sport. Despite their protected status, many people in the surrounding communities continue to harbor animosity toward the animals and view them as nothing more than a nuisance.

Within Yellowstone, wolves are shielded from these particular dangers, but “there are many other natural threats,” says biologist Mike Jimenez, the leader of the U. S. Fish and Wildlife Service’s Wolf Recovery Project. “It’s not a free ticket.” Wolves can be kicked by the elk they are hunting, be injured in fights with grizzly bears, or, most commonly, get hurt during fights with other wolves. “The main cause of death among wolves is fighting each other,” Jimenez says.

However, he notes, “this is a sign of a very stable population,” and a way for the population to preserve a sustainable size. Unlike prey species such as elk, which can exist in enormous herds of many thousands of animals, large predators such as the gray wolf have small populations spread over very large territories. For example, Yellowstone is now home to 120 to 125 wolves in about a dozen packs, spread over more than 2 million acres. This, says Jimenez, reflects the natural carrying capacity of the region. Too many wolves can throw the ecological balance of the system out of whack just as easily as no wolves at all.

Disease is also an issue for the gray wolf — albeit a very natural one. Two years ago, canine distemper ravaged much of Yellowstone’s wolf population. “That year, two-thirds of the pups, which are the most vulnerable to the disease, did not survive,” Jimenez says. Distemper is not unique to Yellowstone; in the 1990s, many wolves in Montana were afflicted with the disease, which biologists suspect may have spread from domesticated dogs. (Wolves and domesticated dogs share a similar ancestry and many of the same diseases.) Parvovirus, another common dog disease, has also cropped up in the gray wolf. Mange, a skin disease that causes animals to literally scratch off large patches of their fur, has been a problem for at least one pack within Yellowstone, and for a few of the 15-odd packs outside of the park. Although the diseases can prove fatal to the animals that are afflicted, their occurrence is “well within the norm,” Jimenez says. “The population is healthy.”

Reintroduction of the Wolves
In the Valley of Wolves - Preview
Interactive Map: Where Yellowstone Wolves Roam
The Druid Wolf Pack Story
Additional Web and Print Resources

Dogs in the Land of Lions
The Last Orangutan Eden
Running With The Herd: A NATURE Short Film
Holy Cow
Deep Jungle: The Beast Within
The Whale Detective