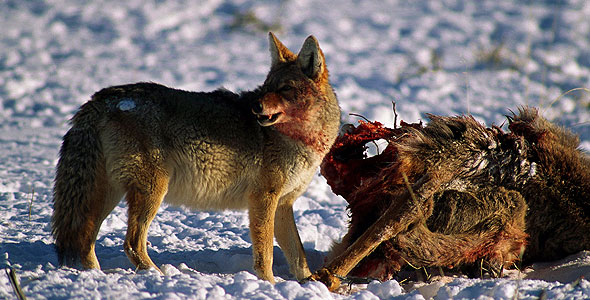 When the gray wolf was eradicated from Yellowstone National Park in the 1920s, more was lost than just the noble and fascinating predator. The park’s entire ecosystem changed. Now, nearly a dozen years since the wolves returned, the recovery of that system to its natural balance is well underway, say ecologists William Ripple and Robert Beschta of Oregon State University.

The researchers began studying the interaction of wolves with other parts of the ecosystem somewhat indirectly. “Back in 1997, I became aware that the aspen trees in Yellowstone were declining,” Ripple explains. “There was disagreement and confusion as to why these trees were disappearing, so I set out with graduate students to unravel this mystery.”

“We went out to the park and we cored the trees and studied the tree rings which show the annual growth, and we were able to age the trees that are still there,” Ripple says. The tree ring analysis indicated that the aspen, which usually regenerate themselves by sending off new shoots rather than by producing seeds, had stopped producing new trees during the first half of the 20th century.

Ripple and his colleagues looked at several possible variables that could be affecting the trees, from climate fluctuations to a changing natural forest fire regime. But the only factor that fit, Ripple says, was the browsing patterns of elk, which like to feed on the seedlings of aspen trees, and which are also a favored food of gray wolves: “The wolves were killed off from Yellowstone in the 1920s, which correlated with the start of the aspen decline. That led us to develop the hypothesis that the wolves were connected in some way to the aspen trees.” That connection, Ripple concluded, was mediated through elk: “We connected the dots: wolves affect elk; elk affect aspen; and therefore wolves affect aspen.”

Ripple and his colleagues subsequently discovered other changes. In some areas, willows — small, scrubby trees that grow in wet areas along stream beds — were starting to grow taller, because they were escaping predation by elk. In other areas, however, the willows continued to be heavily grazed upon. The same patchy changes were also seen with cottonwood trees, which also grow along streams.

“The more I looked at it the more I could see that what is going on may be an ecology of fear,” Ripple says. “The theory goes like this: the browser — in this case the elk — need to make behavioral decisions and tradeoffs as to how much time and energy to put into eating food versus how much time to be staying in safe places.” Those decisions affect where the animals concentrate their feeding efforts, and therefore the distribution of the vegetation they eat. “What we started noticing is that the plants were doing better where the terrain might favor the wolf a little bit more than the elk,” he says. For example, the elk might browse less in areas with poorer visibility (more dangerous to the elk because they can’t see if wolves are on the scene), or regions littered with heavy debris (a risk because it becomes an impediment to escape in the event of an attack).

Indeed, Ripple says, “we found that aspen were growing the tallest along streamside areas that had some downed woody debris or some downed logs nearby.”

Elk behavior and vegetation distribution aren’t the only factors impacted by the return of the Yellowstone’s wolves. Ripple suspects that the ripples of their recovery are reverberating throughout the entire ecosystem, in birds, fish, insects, as well as in other plants and animal species. Beavers, for example, are probably affected, he says. “The park service has been monitoring beaver since the wolves returned, and found that they have increased in numbers every year in the northern part of Yellowstone. Before the wolves returned, there really wasn’t much food for the beaver. But now with this growth of these plants — especially the willow — the beavers have more food, and they are also using the willows to build their lodges and their dams, which may be contributing to beaver population increases.”

“We are at the beginning of a grand ecological experiment,” Ripple says. “We were without wolves for seventy years, and we’ve just had them back in for 11 years, so we’re only just starting to see changes. It could take many decades for the ecosystem to recover.”

In the Valley of Wolves - Preview
Interactive Map: Where Yellowstone Wolves Roam
The Druid Wolf Pack Story
Additional Web and Print Resources
Are Wolves at Risk?