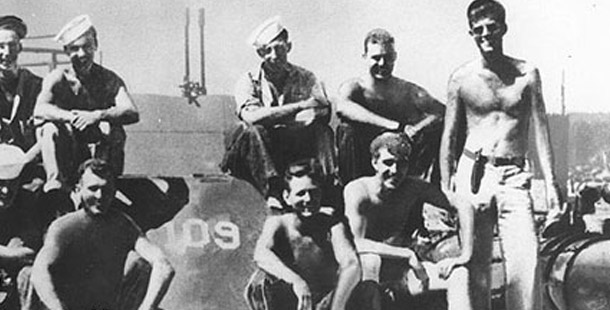 In the cobalt waters around the Solomon Islands, thousands of wrecked ships, planes, and tanks pay silent testament to the often brutal fighting that raged through the region in World War II. Every wreck has a story, and NATURE’s WAR WRECKS OF THE CORAL SEAS tells several of these riveting histories. But perhaps none is better known than the story of the sinking of the United States Patrol Torpedo Boat 109. Indeed, it’s a tale that helped propel John F. Kennedy to the Presidency.

In 1943, the future president was the 26-year old skipper of PT-109, which cruised the channels of the Soloman Islands in search of Japanese vessels. On the moonless night of August 2, 1943, as PT-109 prowled the waters off Kolombangara Island, a Japanese destroyer suddenly emerged out of the darkness and, in an instant, cut Kennedy’s plywood craft in half. Two of his dozen-member crew were killed instantly, and the back half of the craft sank immediately. The survivors clung to the drifting bow for hours. At daybreak, they embarked on a five-hour-long swim to a nearby deserted island. The stronger swimmers, including Kennedy, towed the injured, sometimes using their teeth.

After two days on the small island without food and water, Kennedy realized they needed to swim to a larger island, Olasana, if they were to survive. It was there that two local scouts found them. One carried a coconut that Kennedy carved with a message to a lookout, who radioed the PT base to send a rescue boat. Soon, the story of PT-109 became part of the Kennedy legend of courage under pressure, and helped him win voters in the 1960 presidential election. There was even a PT-109 float in the inaugural parade.

The real PT-109, however, sat somewhere on the Pacific Ocean floor, smashed and battered. But where? That is the mystery that famed ocean explorer Robert Ballard, the discoverer of the Titanic, set out to solve in early 2002. Using maps and accounts of the sinking, Ballard had already narrowed his search area to a 5-by-7-mile swath of Blackett Strait. Using sophisticated sonars and seafloor mapping probes, Ballard’s first target was the stern, since it was a bigger piece of the craft. But after several days of fruitless searching, Ballard decided to change tactics and hunt for the bow instead. The shift paid off: 1,200 feet below the surface, amid piles of drifting sand, Ballard spotted the unmistakable shapes of a torpedo and a torpedo launching tube covered with coral and rust, and sonar suggested a portion of the bow was covered beneath the sand. Navy historians later confirmed that the objects came from a PT boat, most likely the PT-109.

Treasure hunters would love to get their hands on such historic remains. But Ballard has been careful to keep PT-109’s location a secret. The wreck is a memorial, he says, and should be left in peace. Luckily, others note, it lies in water far too deep for recreational divers. Modern tourists, however, can still get a taste of that memorable encounter. The island where Kennedy’s crew washed ashore has become a minor attraction, and has even been renamed Kennedy Island. Its beaches are a favorite sunbathing spot, and its lagoon offers captivating snorkeling and diving. And Kennedy’s old PT base also attracts visitors, eager to see where one of the war’s best-known disasters began.

The Dolphin Defender
Living Edens: Temple of the Tigers
The Story of Cats | Into the Americas
The White Lions
Nature's Miracle Orphans | Episode 1 | Second Chances
Wild Horses of Mongolia with Julia Roberts