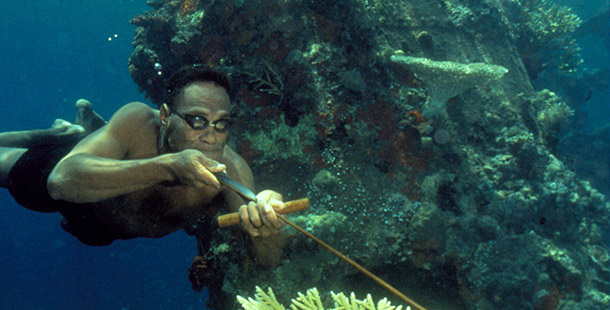 It’s called “Iron Bottom Sound.” Between 1941 and 1945, this swath of ocean off the South Pacific island of Guadalcanal saw some of the fiercest fighting of World War II, with American and Japanese forces clashing almost daily at times. For some, the name still conjures up memories of pain, bravery, and brushes with death. 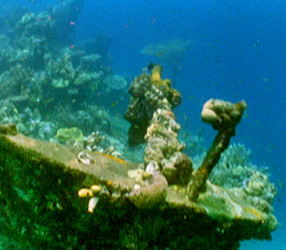 Today, however, Iron Bottom Sound is best known as a mecca for scuba divers, who can explore the dozens of war wrecks that litter its bottom. From fighter planes and tanks, to cargo ships and destroyers, Iron Bottom Sound has become a kind of underwater museum. Major wrecks include the American cruiser Quincy, the Australian heavy cruiser Canberra, the Japanese aircraft carrier Kinugasa, and the battleship Kirishima. While most are in water too deep to be visited by recreational divers, more accessible wrecks have helped make the Solomon Islands, where Iron Bottom Sound is located, a world-famous destination for divers.

There are more than 900 islands in the Solomons chain, which stretches for hundreds of miles across the South Pacific. And divers say there are at least as many wrecks. On NATURE’s WAR WRECKS OF THE CORAL SEAS, for instance, viewers visit the Kasi Maru, a Japanese freighter that was strafed and sunk while unloading cargo on the island of Munda. She now sits in 50 feet of water, next to a barge that accompanied her to the bottom.

Not far away, in Rendova lagoon, sits an American Douglas Dauntless dive bomber with a remarkable story. On July 23, 1943, Marine Corps pilot Jim Dougherty and his radio gunner, Robert Bernard, set out to sink Japanese ships that were supplying local troops. As Dougherty swooped low over the island of Munda on a bombing run, flak from several shore guns crippled his plane. Miraculously, he managed to nurse the failing craft back to nearby Rendova, which had been seized by U.S. troops just 2 days before. He then crash-landed in the lagoon, where he and Bernard were rescued. His plane settled into 35 feet of water, never to be seen again — or so he thought.

More than 50 years later, Dougherty got word that divers had rediscovered his plane. And in 1995, the 75-year old former pilot returned to the site of his crash landing. Donning scuba gear, he swam slowly down to the wreck and then sat in the cockpit one last time.

Nearby Gizo island also has sunken treasure. The 450-foot-long Japanese transport Toa Maru, for instance, lies on her starboard side in 40 feet of water. Artifacts are scattered across the seafloor around her, ranging from Saki bottles and small jars to gas masks and cooking gear. Ammunition still lies stacked in her holds, waiting for guns long silenced. One can almost see the chaos that accompanied her sinking.

In waters close by sit the wrecks of two American aircraft that wrought similar havoc. The Hellcat was a nimble dogfighter that held deadly aerial duels with Japanese fighters. The Corsair, with its distinctive bent, gull-shaped wings, was another air combat workhorse. Today, both planes sit quietly on the bottom, their powerful engines mute, their wings covered with sponges and coral.

Such wrecks have become an important mainstay of the Solomons tourism industry. But they also pose threats to the environment. Fifty years after their destruction, some wrecks are beginning to leak oil, imperiling coral reefs and beaches. Some biologists say reefs around Western Guadalcanal are dying from oil pollution. To address the problem, officials have been working on plans to remove oil from some wrecks — without destroying their value as historical sites or memorials to those who once fought fiercely over the South Pacific.