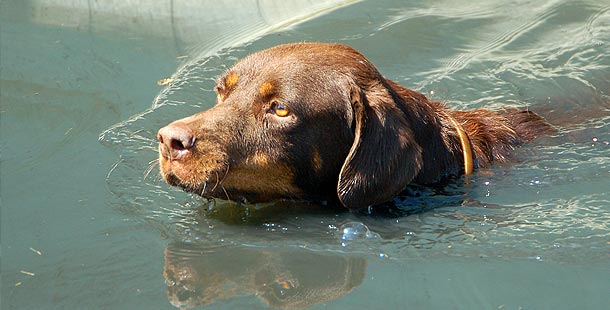 His name was Thunder. He was just a puppy when Katrina’s 100-mile-per-hour winds and 20-foot-high storm tides slammed into New Orleans, turning the city into a ghost town. Greta Joseph, Thunder’s owner, had fled to safety before the storm hit. She couldn’t take Thunder along, so she left food and water, assuming she’d be back soon.

The days turned to weeks as officials struggled to reopen the city. By the time Joseph was able to return, it was nearly too late. As NATURE’s Katrina’s Animal Rescue shows, Thunder was starving, dehydrated, covered with sores, and near death. In anguish, Joseph rushed him to a makeshift animal hospital. Veterinarian Deborah Campbell struggled to save the dog’s life.

Thunder wasn’t the only beloved pet fighting to survive after Hurricane Katrina. Experts estimate that the people of New Orleans left nearly 250,000 dogs, cats, birds, fish, and other pets when they fled the city. Many, like Thunder, were left in homes with limited supplies of food and water. Others were let loose and were able to fend for themselves. Dogs, for instance, “can get pretty creative when they run wild,” says veterinarian Nick Dodman of Tufts University in Massachusetts. “They tend to be in pretty poor shape and become emaciated, but they can survive.”

Once the storm clouds lifted, volunteers came from around the country to launch one of the largest animal rescue efforts ever attempted. Rescuers waded through floodwaters, used crowbars to pry open shuttered homes, and struggled to capture sick and scared pets that were cowering on rooftops and paddling through water full of dangerous bacteria and other pollutants. Overall, rescuers saved more than 15,000 animals in just a few weeks. Thousands have been reunited with their owners. Others are staying at foster homes.

While these animals recover from physical ailments, Dodman advises caregivers and owners to watch for signs of post traumatic stress. He says the experience may leave psychological scars. Domestic animals that survived the storm, for instance, may be forever afraid of storms. They become nervous, fearful, or aggressive if they hear the sound of heavy winds, rain, or rushing water. “It will partly depend on the [animal’s] breed and personality,” explains Dodman. For instance, “John Wayne-type dogs won’t care … but another animal may panic during a full-blown storm and hurl itself out of a window. For dogs that are afraid of storms, [Hurricane Katrina] was the mother of all storms. It would have been Armageddon.”

Dodman believes people can do a lot to help their pets resume a normal life. Among the tips: get right back to a regular feeding and walking routine; set up a cozy, private area where the animal can rest or play with a favorite toy; and of course, provide plenty of love and play time.

Dodman also urges pet owners to plan for the worst. “Have you thought about what you’d do with your pet in a natural disaster? Have a cache of fresh water and food. A little bit of forethought can go a long way.”

In New Orleans, however, even the best-laid plans didn’t save some pets. Supplies ran out before owners could return. But Thunder was lucky. Thanks to his owner’s unrelenting efforts to get back to her home, and the skills of caring vets, Thunder survived his close encounter with Hurricane Katrina.