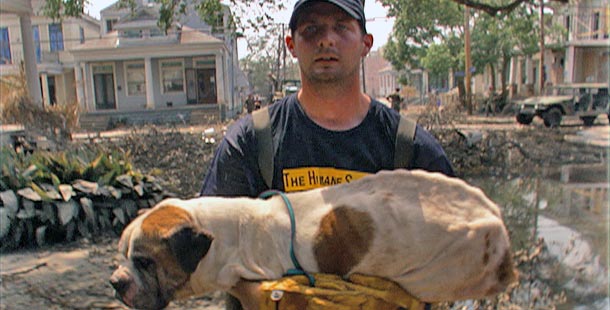 Tanya Bird was working for the Louisiana Society for the Prevention of Cruelty to Animals when Katrina hit. While her kids were evacuated to her mother’s house in Mississippi, she stayed behind to help in the animal rescue efforts. She was eventually evacuated to Houston, but when Rita hit, she moved to Dallas. Tanya currently works at a group home for the mentally disabled that originated in New Orleans. She hopes to move back to New Orleans along with the people in the group home. Unfortunately, her own house, which she was in the process of buying, was destroyed. She is waiting to hear if it is salvageable.

Debra Campbell graduated from veterinary school at Tufts University in 1992. After working in a small animal practice for several years, she opened her own hospital. In 2000 Debra sold the practice to a national veterinary group; she currently works with them part time. Since graduating from Tufts, Debra has worked with Veterinary Medical Assistant Teams (VMAT), a group under the Department of Homeland Security that offers veterinary aid in disasters. She has participated in many rescue missions, including providing medical support to search dogs after the September 11th attacks. Debra has two children, Paige and Greer, and has been married to her husband for 19 years. The family lives in the suburbs of Boston with 11 dogs and cats.

Jane Garrison plays a critical role in rescuing stranded animals in New Orleans following Hurricane Katrina. Jane coordinates the search and rescue teams that have saved over 9,000 animals. Jane’s experience started in 1996 when she became certified in disaster animal rescue. She was sent to rescue animals from floods in California and tornados in Arkansas.

Since the filming of the documentary, Jane has not stopped rescuing animals in New Orleans. Even when the state and local authorities insisted on October 1 that rescue efforts should end, Jane rescued an additional 600 animals. She has also developed and instituted a citywide feeding program that drops food and water all over the New Orleans area to help the animals freed from their houses when doors and windows were blown out. Jane is also coordinating teams of volunteers who are humanely trapping these terrified animals and reuniting them with their displaced families. Jane is determined to see that a situation like what happened in New Orleans never happens again. Her motto, “If I leave, they leave,” represents the need for laws to change to allow animals to be included during evacuations.

Jane has also worked to save elephants in Thailand, Africa, the United States, South America, and Canada. She has authored part of a book called ELEPHANTS AND ETHICS. Jane sits on the awards committee for the prestigious Genesis Awards and is a board member of Pet Helpers in Charleston, South Carolina. She shares her home with six rescued cats, a 16-year-old dog named Codi, and her very supportive husband, Mark. To keep up to date on Jane, visit http://animalrescueneworleans.org/about.html

Don Kinney and Yogi Don Kinney has been a police officer with the New Orleans Police Department for 18 years. In the aftermath of Katrina, he was assigned to patrol the Audubon Aquarium in New Orleans. While there he fed the animals, such as penguins, whose caretakers had been forced to evacuate the city. Don, whose home was destroyed, lived in the aquarium for four to five weeks with several other police officers. He now has temporary housing in a cruise ship until FEMA trailers are supplied. Since birds are not allowed on the cruise ship, his pet parrot, Yogi, is now staying with his “Aunt Chrissy” and “Uncle Greg,” bird lovers and friends of Don. Don visits whenever he gets a day off, to Yogi’s delight.

Andrew Ireland Moore is currently studying Fisheries and Wildlife Science at Oregon State University. He and his wife Laura, an animal law attorney and Executive Director of the National Center for Animal Law, share their Portland home with two dogs, two cats, and a mouse. Drew graduated from Lewis & Clark Law School in 2004; his studies focused on animal and criminal law. He has worked with the Savannah Humane Society and the Oregon Humane Society (OHS). With OHS, he conducted humane investigations and was a founding member of the Oregon Humane Society Technical Animal Rescue team (OHSTAR). He received rescue and disaster training from OHS, American Medical Response, Rescue 3 International, and FEMA.

Drew and his wife were visiting family in Savannah, Georgia when the call for rescuers went out from the HSUS. They traveled to the New Orleans area as field rescues started. Drew began field rescue operations the day after he arrived and continued response efforts for approximately three weeks. After filming ended, he remained in the New Orleans area, continuing rescue operations, until after Hurricane Rita struck. He then returned home to continue his studies at OSU. He has since spoken to junior high school students about his experiences and presented at the 13th Annual Animal Law Conference at Lewis & Clark Law School.

Dave Pauli has been rescuing wild and domestic animals for 26 years. His career as a wildlife rehabilitator, urban wildlife consultant, director of both animal control and humane society shelters, and, for the last 15 years, as a Regional Director for The Humane Society of the United States has given him unique opportunities to help animals under the best and worst conditions. Dave responded to and led animal rescue teams to large disasters like The Red River Floods of North Dakota/Minnesota and many hurricanes such as Opal, Ivan, Charlie, and now Katrina and Rita. He was also first responder to the Idaho gubernatorial-declared disaster of Ligertown, where 26 loose African lions negatively impacted a small community for 10 days. He specializes in field capture, volume live trapping, and remote chemical capture of feral animals. Dave lives in Montana with his wife, two daughters, and a wide variety of companion animals.

Dave continues to be involved and supportive in the Katrina/Rita response. After serving two times as Lamar-Dixon Incident Commander for a total of 24 days, Dave returned to Montana and designed a 20-foot volume trapping trailer. It contains 50 traps, related animal handling equipment and technologies, and an excellent two-person volume trapping training team of a veterinarian and a wildlife biologist. This team drove the equipment down and trained three different capture teams on the humane capture and handling of stressed animals. Dave will again be in New Orleans in mid-November, checking on the trapping progress and spending several more days assisting in the field. He will also attend several planned debriefings to make sure that the “lessons learned” during Katrina/Rita will help us to plan, mitigate, respond to, and recover from the next major animal-related disaster.