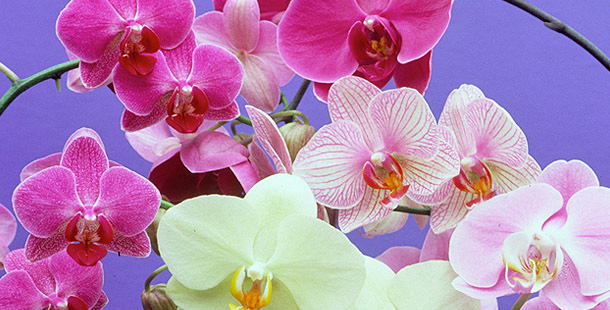 Pity the poor solitary bees that make their home on the sunny Mediterranean island of Majorca. Each spring, the males emerge from their underground lairs in eager search of a mate. Some find love with another buzzer, but others are made to look like fools — by a flower. Majorca’s beautiful bee orchid blossoms look and smell just like a ready-for-hugging honey, and lure the excited males in for repeated bouts of frenzied, but fruitless, mating. The frustrated bees eventually give up, but not before the plants — specially designed to glue their pollen sacs onto the insects’ legs — have tricked the bees into unknowingly carrying the pollen from one flower to another.

The bee orchid isn’t the only orchid to drive admirers crazy. These unusual flowers, the subject of NATURE’s Obsession with Orchids have long captivated human admirers, too. Fittingly, in fact, Obsession with Orchids opens at an annual international orchid show, where thousands of flower fanciers have gathered, eager to get a look at the latest and showiest flowers created by orchid breeders. Indeed, while there are an estimated 30,000 kinds of wild orchids around the world, mostly in the tropics, human breeders have created many more hybrids over the last few hundred years. Like the solitary bees, people seem powerless to resist the orchid’s magic spell. “People get very passionate about orchids; they just seem to get hooked,” says NEW YORKER magazine writer Susan Orlean, author of THE ORCHID THIEF, a page-turning tale of the orchid’s remarkable history, biology, and one man’s obsession with the flowers.

As Obsession with Orchids shows, the flowers do have a colorful history. A century ago, adventurers often died during daring collecting journeys into jungles and swamps, in search of new and captivating species to sell to eager buyers. And it took gardeners centuries to unlock the secret of getting orchids to grow and flower in the greenhouse. The secret? Orchid seeds only germinate when exposed to a special fungus that growers can replicate with a gelatinous mixture of sugar and nutrients. Today, as a result of this and other discoveries, orchid culture is a billion-dollar global enterprise with millions of customers.

The buyers aren’t beguiled just by the orchid’s many shapes, sizes, and colors. Some are fascinated by the flower’s sex life, which often features the drama of desire and deception. Over millions of years, orchids have evolved remarkable ways of attracting, and sometimes entrapping, birds and insects. The bucket orchid Coryanthes, for instance, lures in male euglossine bees with a perfumed oil the bees need to attract mates. As Obsession with Orchids shows, it’s hard for the bees to gain a foothold on the slippery substance, and they eventually fall into a pool of the slimy fluid. There is only one way out — a tight-fitting channel the bee must squeeze through to escape. And when he does, the orchid secretly glues two plump pods of pollen onto the bee’s back, which will be removed when he falls into another flower’s pool of desire.

Other orchids have evolved similarly tortuous traps. Some attract flies by smelling like dead meat. Then, once the fly lands, it uses a kind of trap door to drop the fly into a pollen chamber with only one exit. To attract butterflies, some orchids use another trick — mimicking the color and shape of nearby flowers favored by the flutterers. But unlike those flowers, the fake butterfly orchids offer no nectar to the visiting insects, and simply use them to spread their pollen from flower to flower. Still other orchids appear to be an enemy to a pollinating insect — prompting an attack that allows the flower, once again, to give its pollen a free ride.

Such unusual pollination schemes have long entranced biologists. The great evolutionist Charles Darwin was so taken with the flowers that in 1877 he published a thick book devoted to THE VARIOUS CONTRIVANCES BY WHICH ORCHIDS ARE FERTILISED BY INSECTS. In it, he noted that some orchids appear to rely on just one specific pollinator — a particular species of moth, for instance — for survival. Modern researchers call this specialized biological embrace of two species “co-evolution.” But co-evolution has both benefits and risks. The benefit is that both partners can specialize and don’t have to waste energy finding other ways to reproduce. The peril is becoming too reliant on a single partner. If one half of the co-evolved pair becomes extinct, the other is surely doomed as well.

Darwin’s insights into co-evolution allowed him to foretell the discovery of a new species. In a famous example, he described an orchid from Madagascar that had a foot-deep nectar well that kept the sweet liquid far out of reach of all known butterflies and moths. But the existence of the flower led him to predict the existence of a specialized moth with a foot-long proboscis that, like a straw, could reach the deep reward. Indeed, after Darwin’s death, researchers discovered just such an insect, and named it the “Predicta moth” in honor of Darwin’s educated guess.

The Predicta moth won’t be the last orchid-related discovery. Even today, researchers and flower breeders are combing the world in search of both new understanding and new examples of what Darwin called “my beloved Orchids.”