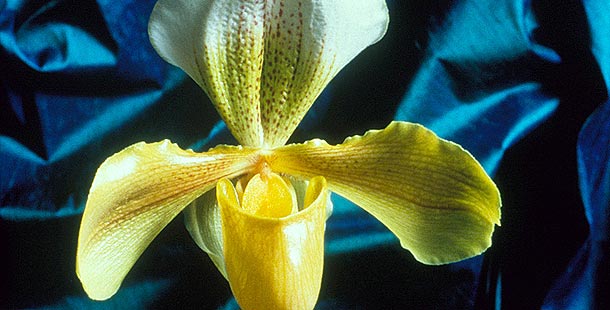 In 1994, NEW YORKER magazine writer Susan Orlean traveled to Florida to cover a most unusual trial — and ended up becoming entangled in the wondrous and sometimes treacherous world of orchids. The result is THE ORCHID THIEF: A TRUE STORY OF BEAUTY AND OBSESSION (Random House, 1998).

Orlean tells the story of orchid fancier-turned defendant John Laroche, who hoped to parlay an armful of rare orchids taken from a protected swamp into a fortune by selling the flowers to impassioned collectors. Along the way, THE ORCHID THIEF offers a delightful history of the orchid trade, modern stories of intrigue among orchid growers, and Orlean’s own quest to find the elusive ghost orchid. The story proved so fascinating that Hollywood came calling, bringing the book to the big screen in the quirky film ADAPTATION featuring Chris Cooper as Laroche and Meryl Streep as Orlean.

Orlean knew little about orchids before starting work on the book and even now insists that “I’m not an orchid expert.” But after months of wandering through swamps and orchid shows, she says she understands the flower’s powerful draw. “People with wildly different tastes converge on this fascination,” she says, with some fixated on their often garish colors and others “fascinated with categorizing orchids and figuring out their pedigrees.”

Still others take pride in getting the plants, which can take years to grow from seed, to bloom. “They have this mystique for being temperamental,” she says. “Now, getting a rose to bloom is not inconsequential, but people don’t celebrate it the way they do when an orchid blooms. You just have a different relationship with an orchid than with a rose. Orchids are plants that people can have in their homes, year round, regardless of climate. So raising orchids is not about gardening, it’s more like animal husbandry.”

Even Orlean has been bitten — just a bit — by the orchid bug. Several of the plants now adorn her apartment. “I have to admit, I rather like them,” she says. “They are blooming, so I feel like a genius. And they look great in my apartment.”

Nor is she devastated by her failure to find a blooming ghost orchid, a rare Florida species that was the object of Laroche’s desire and eventually her own. “It would be really interesting to see,” she says. “I was crushed and exasperated when I couldn’t find one. But then it sort of dawned on me that I can live without it. I’ve sort of moved on.”

Still, she is curious to find out what happens to a flask of baby ghost orchids a fan gave her, which she turned over to a botanical garden in New York. A curator recently called and said that the plants were beginning to mature. “I’ll probably go over and see how they are doing,” she admits. But, she adds, “I am not a person who is very inclined to get hooked.”