Orangutans in the wild are using tools. 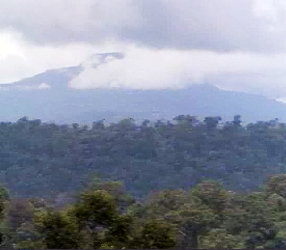 In 1994, Carel van Schaik of Duke University became the first anthropologist to document the use of tools among wild orangutans. His study investigated orangutans in the swampy Gunung Leuser National Park, in the northwest corner of Sumatra, who were developing implements to help themselves eat. Here, ravines, knee-deep water, and fish leeches keep out loggers, leaving the orangutans relatively undisturbed.

The swamp is densely packed with orangutans that van Schaik describes as gregarious and extremely tolerant of each other — an unusual arrangement for these apes, who are usually solitary. “The reason that tolerance is important is that we assume that the critical factor for using tools is the ability to learn it from others,” van Schaik explains. “Everybody is using tools, and everybody has the chance to observe it, so it is a social behavior.” Orangutans in captivity often use tools, but no one before van Schaik had observed this behavior in wild populations. Wild orangutans on the nearby island of Borneo have not developed tool use, perhaps because they are more sparsely distributed throughout the forest.

Living high in the trees of the flooded Gunung Leuser forest, orangutans locate pulpy fruits, of which their favorite is locally called “puwin.” Inside this fruit lies a rich source of protein and lipids; outside are tiny hairs that van Schaik describes from experience as feeling like “Plexiglas needles,” capable of delivering a painful jab. By sliding a thin stick into a crack in the fruit, orangutans can get the seeds out without having to handle the prickly husk. “Here is an example of how technology makes it possible for animals to make a much better living,” says van Schaik.

From an anthropological viewpoint, a phenomenon such as tool use represents orangutan culture, since the entire group participates in a behavior that has developed over time. This, in turn, may relate to the evolution of human cultures. For this reason alone, van Schaik believes these highly intelligent primates deserve protection from the threats of the illegal pet trade and habitat destruction. “Say the orangutan population is reduced, or goes extinct,” speculates van Schaik. “Then this behavior will die out. You can reintroduce orangutans into the wild, but not a culture.”

The Elephants of Africa
Dolphins: Spy in the Pod | Part 2
The Last Orangutan Eden
The Whale Detective
The Beauty of Ugly
Running With The Herd: A NATURE Short Film