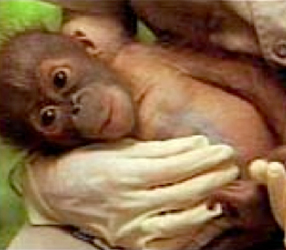 At most, 20,000 orangutans still exist in the wild, which is 30 to 50 percent fewer than were estimated 10 years ago. Once ranging throughout Southeast Asia, the species now occupies only small pockets of habitat on the Southeast Asian islands of Borneo and Sumatra. While their future is tied to their habitat, putting their fate primarily in the hands of the Indonesian and Malaysian people whose land they share, it also depends on the global economics that drive the timber market, as well as the worldwide market for illegal pets.

Orangutans are not stay-at-home animals. Every day, they travel through large areas of forest, gathering the variety of bark, insects, and different types of fruit they eat, which are spread throughout thousands of forest acres. But increasingly, the orangutan has had to compete for space with the logging industry. Timber is being harvested out of the orangutan’s habitat, stripping the forests. And most recently, a series of forest fires has devastated the area, causing untold damage to the already fragile habitat.

In addition to suffering the effects of logging practices, the orangutan’s habitat has fallen victim to agricultural development. In Malaysia, palm oil plantations have taken the place of forests, and one plantation can occupy as many as 50,000 acres. As forests are cleared for planting, orangutans’ homes shrink to small clusters of trees on which they are marooned, living in and eating from the trees that are farmers’ livelihoods.

Palm hearts make a delicious meal for an orangutan, who can easily go through 100 or more plants in a single evening. After unsuccessfull attempts to deter the animals by setting out scarecrows and building fences, plantation owners have sometimes resorted to killing the orangutans. 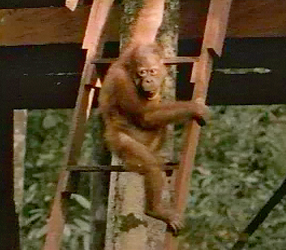 On the island of Borneo, farmers in the Malaysian state of Sabah have the option of capturing orangutans they find and bringing them to the Sepilok Orangutan Sanctuary, run by the Sabah Wildlife Department. This facility provides medical care for orphaned and confiscated orangutans, as well as for dozens of other wildlife species. The center also puts wildlife on exhibit for the public as part of an education program. Much like the orangutans at the Wanariset Orangutan Reintroduction Center, the rescue organization in Kalimantan, Borneo, featured on the NATURE program, the animals at Sepilok range from newborns to adults.

Many orangutans are victims of the illegal pet trade, which skyrocketed in the 1980s after a 1986 television show in Taiwan featured a family with an orangutan as a pet. Demand grew quickly, and poachers descended on the rainforests to grab baby orangutans and sell them on the black market. Taiwan is still the biggest illegal importer of baby orangutans. Once these babies mature, however, they become too strong and bossy for their owners, many of whom abandon them.

Even if these abandoned orangutans make it to the safety of a rehabilitative center like Sepilok or Wanariset, great damage has been done: in the process of taking a baby orangutan from the wild, hunters invariably kill the mother, leaving one fewer reproductive female. While a rescued baby may eventually return to the wild, it will be years before he or she will have offspring.

The work at Wanariset to reintroduce orangutans into the wild, as you see on NATURE, is making some headway in counteracting the combined threat of deforestation and kidnapping.

But first, the workers there must spend a lot of time teaching the resident apes how to survive in the wild: kidnapped before they can absorb the crucial lessons of life from their mothers, many of these animals have no idea how to perform basic skills like climbing, swinging, or harvesting fruit. As long as the animals reintroduced into the wild are disease-free and can fend for themselves, there is a chance that they will produce a new generation of wild-born offspring.

If you are interested in learning more about Wanariset and the work they do, visit their Web site, where it is possible to help the cause by sponsoring an individual orangutan and watching its progress from halfway around the world via the Internet.