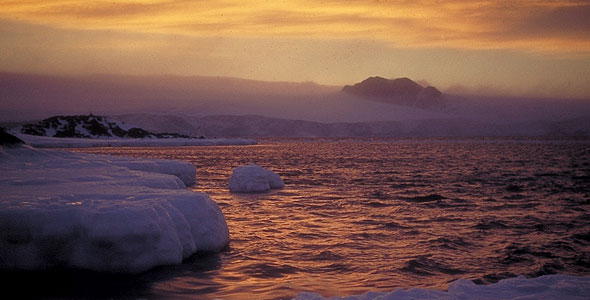 For the layperson, trying to understand the essence of climate change research can be exasperating — particularly when it comes to the potential impact of global warming on the Antarctic. On the one hand it is reported that the Antarctic Peninsula, which extends north toward Chile, is warming; that a massive ice shelf the size of Delaware broke off from the Larsen B peninsula in 2002, a collapse that scientists say was of a scale unprecedented in the last 12,000 years; and that significant Antarctic ice melting could result in a perhaps disastrous rise in sea levels. On the other hand research indicates that, over the last thirty-five years, the Antarctic as a whole has cooled, and that the levels of sea ice are actually increasing.

Such ostensible contradictions have been used to suggest that global warming is, in fact, not happening. Yet part of the confusion is due to the lack of a broader context that can only come from more research. According to the results of a 2004 study by NASA’s Goddard Institute of Space and Studies (GISS), the recent cooling trend is an effect of the depletion in the ozone layer over Antarctica. “In the coming decades, ozone levels are expected to recover due to international treaties that banned ozone-depleting chemicals,” states a NASA press release. Once it does, Antarctica’s cooling trend is likely to rapidly reverse. The increase in sea ice levels, meanwhile, is also the result of global warming. A 2005 satellite study funded by NASA suggests that warming of the climate has led to an increase in precipitation rates and deeper snow in the Southern Ocean, which becomes so heavy that it pushes Antarctic ice below sea level, resulting in more and thicker ice.

There is still a lot of uncertainty about what could happen to Antarctica, and this sense of doubt — about the climate in general — has been used by politicians on both the left and the right to bolster their respective positions. President George W. Bush, for instance, has declined to cut carbon dioxide emissions from power plants, “given the incomplete state of scientific knowledge of the causes of, and solutions to, global climate change.” And in 2006, former Vice President Al Gore returned to the public eye when An Inconvenient Truth, a successful documentary film based on Gore’s lecture series about climate change, raised concerns that an immediate response to global warming was required to prevent catastrophe.

Perhaps the best a concerned nature-lover can do is turn to an outside body. According to a 2001 report by the Intergovernmental Panel on Climate Change (IPCC), an assessment panel established by the World Meteorological Organization (WMO) and the United Nations Environment Programme (UNEP), a few things, at least, seem clear:

About
Additional Web Resources
Krill: Cornerstone of the Antarctic