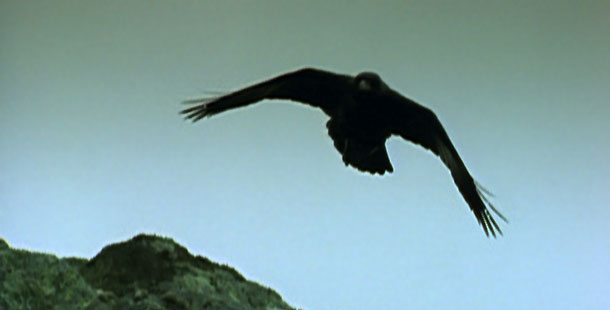 Generally, birds don’t get credit for being smart animals. Just think of the way the expression “bird-brained” is used. But corvids, which include magpies, crows, and ravens in particular, flutter in the face of this negative stereotype. Their behavior is often so clever, cunning, fun-loving, smart, and witty that it has motivated researchers to try to explain why. In fact, some scientists consider these black-feathered scavengers’ position on the intelligence spectrum to be on par with canids such as wolves, coyotes, and dogs, and have conducted experiments to try to quantify the raven’s brainpower.

In NATURE’s Ravens we see zoologist Bernd Heinrich of the University of Vermont work with ravens to see whether they could learn to distinguish between strings bearing food and strings bearing rocks and modify their behavior based on their understanding. The ravens performed well, even when the level of difficulty was increased by crossing the strings.

Heinrich has also used anecdotal evidence to point to raven cognitive intelligence. For example, the researcher flushed a bird off a frozen chunk of suet and observed upon inspection that the raven used its beak to carve a precise groove around the fat, allowing it to carry off a large chunk at once instead of several small morsels to eat one at a time. Heinrich commented that “the raven not only had thought ahead, but also had acted on that thought and shown intelligence.”

A central question that presents itself is whether the raven’s sharp behavior indicates complex cognitive processes associated with human learning. Johannes Fritz and Kurt Kotrschal of the University of Vienna, Austria, attempted to provide an answer with an experiment similar to Heinrich’s. Ravens were asked to perform a task — opening a box to get a reward — and then teach the behavior to their fellow birds. According to Henry Gee of Nature Magazine Online, while the birds’ performance indicates a high learning level, the results are inconclusive because it’s impossible to tell how the ravens learn: is it by a complex form of “imitative learning” or by a lesser process known as “stimulus enhancement”?

Gee suggests that while ravens might learn by stimulus enhancement, which means that a learner raven might simply come to link the act of opening a box with getting a reward, it seems likely that the corvids engage in imitative learning, which Gee states is “considered to be the most demanding category of social learning, because it requires the learner to translate what it sees (sensory input) into its own actions (motor output).”

How then can one account for corvids’ seemingly complex decision-making skills? After all, birds don’t have a cerebral cortex, so at one time their actions were considered robotic in nature. But in the 1960s, neurologist Stanley Cobb found that birds have a part in the forebrain, called the hyperstraiatum, that allows them to perform synonymous functions, and that ravens have among the largest brains of any birds as well as a relatively high number of brain cells. Natural history author Candace Savage writes: “Crows, ravens, magpies, and jays are not just feathered machines, rigidly programmed by their genetics. Instead, they are beings that, within the constraints of their molecular inheritance, make complex decisions and show every sign of enjoying a rich awareness.”

Beyond explaining how and why ravens act as they do, it’s how this innate intelligence manifests itself in behavior that makes these birds fascinating to observe. As seen on NATURE, ravens achieve mastery and possess manipulative powers over other creatures in their domain, often letting others do work for them. For example, ravens will call wolves and coyotes to prospective meals so they can expose the carcass and make the meat accessible to the birds. In addition, ravens will show their true scavenger colors by waiting for other birds with specialized foraging skills to make a catch and then cunningly seize the defeated prey for themselves.

Not all raven behavior is so devilish; some is merely mischievous and even good-natured. On NATURE, we are treated to a raven frolicking in the snow as well as the domesticated pet raven named Loki soothingly and majestically flying alongside her owner’s vehicle. Seeing how affectionate and keen these birds are, it’s easy to understand why one might want to keep a pet raven. As Loki’s owner, Rose Buck, says, “Loki’s bright, clever, very intelligent, and mischievous. Sometimes, he can be an absolute pain, but I wouldn’t be without him. He’s just great.”

Though it might be tempting to run right out to your local pet store to buy a raven, they aren’t available and, more importantly, are federally protected in the United States; it’s illegal to buy or even hold a raven (unless one has a difficult-to-obtain permit). However, many people successfully raise orphaned, nestling crows under 3-4 weeks old to the point where they are able to eat independently, and then release the birds when they are approximately eight weeks old. Information on diet and care of orphaned ravens, as well as a wealth of other material, can be found on the American Society of Crows and Ravens Web site.

SHARE
Features
About
Additional Web and Print Resources
You May Also Like
Penguins: Spy in the Huddle | Episode 1 | The Journey
An Original DUCKumentary