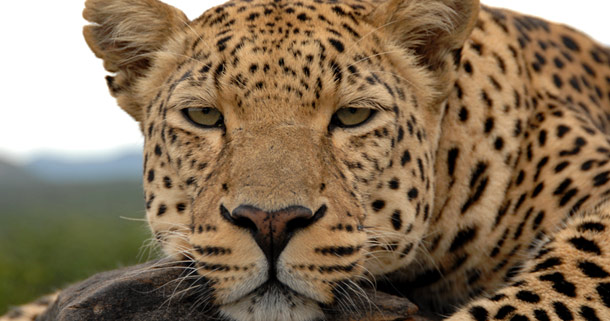 Size: Averages 28 inches at the shoulder with a general range of 17.5 – 30.5 inches high at the shoulder. It’s the smallest of the big cats, which include tigers, lions, and jaguars.

Habitats: Forest, subtropical and tropical, savanna, grassland, rocky and mountainous regions, and desert. The leopard can live in both warm and cold climates.

Geography: The range of leopards is the most widespread of the big cats, covering a large stretch of Africa, parts of the Middle East, and Asia, including China, India, and eastern Russia.

Population Health: Near Threatened (according to IUCN)

Threats: Humans – Urban expansion results in habitat loss and a decrease in food sources. Leopards are also hunted for their valuable fur and to prevent livestock loss.

The animal’s name derives from the Greek word leopardus, a combination of leon (lion) and pardus (panther).

Of the big cats, the leopard is the only known species that lives in both desert and rainforest habitats.

Leopards are generally nocturnal and do most of their hunting at night. Their large eyes and dilated pupils allow them to see well in dark conditions.

Leopards are incredibly athletic and known for their climbing ability. They often carry food into trees to avoid losing it to scavengers like lions and hyenas.

They tend to be solitary animals and rarely interact with each other except to mate or raise cubs.

Leopards breed perennially with a gestation period of approximately 3 months, giving birth to a litter of 2-3 cubs on average.

Despite their names, the clouded leopard (neofelis nebulosa) and snow leopard (panthera uncial) are often considered a separate species.

One of the rarest subspecies of leopard is eastern Russia’s Amur Leopard. There are only an estimated 30 currently living in the wild.

Leopards can go for long periods of time without water, living off the moisture of their prey.

Leopards mark their territory with urine and claw marks on the bark of trees.

Rudyard Kipling wrote the short story, How the Leopard Got Its Spots, to offer his own fictional explanation for the big cat’s attractive coat.