Leopards are survivors. Despite a changing world, the leopard has been able to maintain a surprisingly large population, especially in comparison to other big cats. While nobody knows the exact number of leopards currently on the planet, it’s estimated that there are roughly half a million — ten times more than lions, tigers, and cheetahs combined. The majority are found in the grasslands of sub-Saharan Africa, most likely where the modern-day leopard originated hundreds of thousands of years ago — but they are also widespread, covering much of Africa, the Middle East, as well as eastern and southern Asia. They have settled in terrains that range from tropical rainforests and deserts, to alpine mountains and the outskirts of cities. Of the big cats, the leopard is the only known species that lives in both desert and rainforest environments.

What makes the leopard so successful? They are not as fast as cheetahs, nor as strong as lions. But the leopard is adaptable, able to acclimate and modify its habits to thrive in its current environment. As the natural landscape shifts, so does the leopard, adjusting to the new world that surrounds it.

Physical characteristics of leopard populations like fur color and fur length vary depending on location. A leopard living in the savanna will have orange or yellow fur while a desert leopard’s fur is paler. Leopards that live in cooler climates tend to be longer-haired and more gray in color; rainforest leopards are more golden. A recessive gene can result in melanistic (black) leopards, as similar genes produce red hair in humans. These leopards are relatively few in number and are primarily found in tropical environments like the forests of Northeast China where there is more cover, and they can better blend with their surroundings. These differences enable leopards to live successfully in a range of environments. 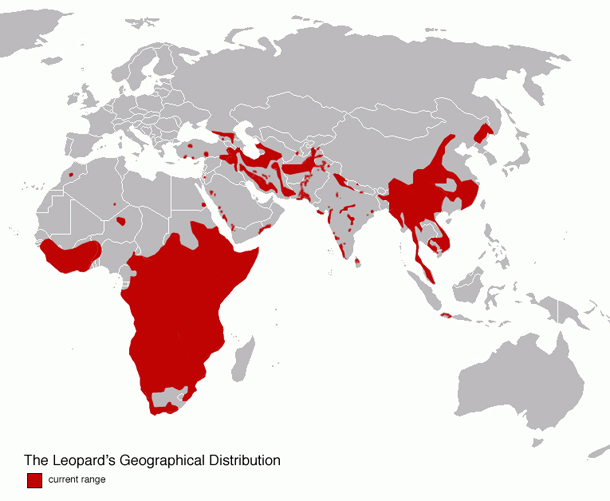 While the leopard is resilient and adaptable, its population has recently suffered a decline, primarily attributed to human-leopard conflicts. The leopard’s valuable fur makes it vulnerable to poachers and hunters. Urban expansion has resulted in substantial habitat loss, a decrease in food sources, and aggression from communities that kill leopards to protect their livestock. The number of sightings of leopards near and around villages has continued to rise as their natural habitats and food sources shrink related to development. There have been sightings in developed areas of India, South Africa, Tanzania, Nigeria, China, Saudi Arabia, even the United Kingdom. In a study conducted by the WWF in Pakistan, between 2005 and 2007, the majority of leopard sightings – 97 out of 125 – were in and around the small group of villages that were being monitored. Generally leopards do not harm humans, but there have been cases of leopards attacking people. In 2004, fourteen people in Mumbai were reported to have been killed in attacks. Ongoing efforts are focused on educating affected communities to minimize leopard-human conflicts and to conserve natural habitats to deter leopards from moving into urban areas.

IUCN (International Union for Conservation of Nature) describes the leopard as “Near Threatened” on their Red List of Threatened Species. While leopards as a whole are not considered endangered, populations of certain leopard subspecies are less secure.