Sharks have long served as the nefarious subject of stories told by everyone from seafaring captains to Hollywood screenwriters. But researchers say sharks don’t deserve their nasty reputation. To separate shark fact from shark fiction, read on.

Myth: All sharks are large and appear menacing.

Fact: The 400 plus kinds of sharks known to exist range in size from the tiny, 6-inch long cigar shark to the 45-foot long, gentle whale shark. While some come in a menacing gray color, others are brightly colored in beautiful patterns. Not all sharks have rows of razor-sharp teeth. In fact, some grind their food with flat teeth, and others don’t even need their teeth to eat, like the gigantic whale shark, which sifts food out of the water using rake-like gills.

Fact: Most sharks do like meat but fish, squid, seal, porpoise, or whale make a shark’s perfect meal. Some sharks, like the giant whale and basking sharks, only eat tiny plankton. Some sharks can go days or weeks without eating at all. Contrary to public perception, sharks attack less than a hundred people a year on average. Often the attacks are accidental and are rarely fatal. In fact, more people are killed each year by dogs, lightning, and even falling soda machines than by shark attacks!

Myth: There are too many sharks in the sea.

Fact: Many shark species are endangered because of pollution, loss of habitat, and excessive fishing in their environments. Furthermore, the loss of sharks imperils many ocean ecosystems since sharks play a key role in culling sick animals and keeping other populations in check.

Myth: All sharks can smell blood in the water from miles away.

Fact: Some sharks do have a highly developed sense of smell, which helps them hunt in the dark and detect their prey. Other sharks don’t depend on their sense of smell for foraging.

For more info on sharks, go to NATURE’s shark page! 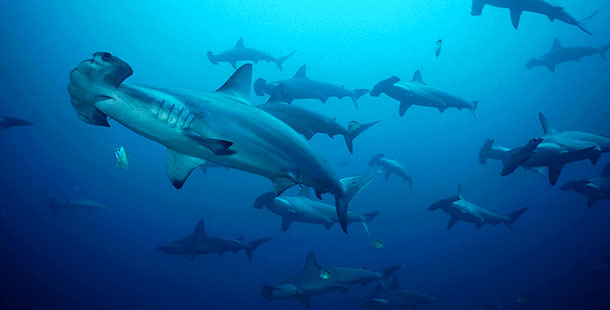