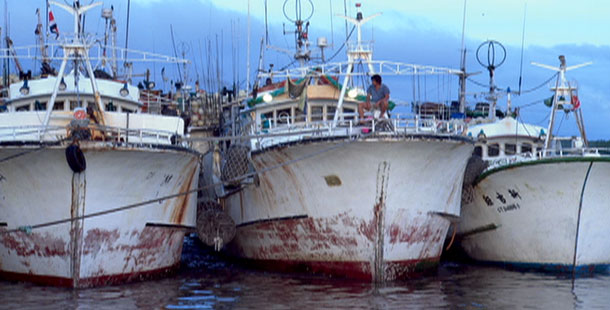 Over the last few decades, shark populations around the world have started to show signs of trouble, and NATURE’s Shark Mountain reveals one of the causes. In one scene, a hook and line trails from a shark’s mouth like a slender warning flag — a remnant from a close call with a longline fishing boat.

Luckily, this shark escaped, but researchers say many other sharks have not been as lucky. Longliners — which set lines that can be up to 15 miles long and are laden with hundreds or thousands of baited hooks — pose an increasingly potent threat to sharks, which are often hunted for their fins and meat. Other marine animals not intended to be caught by longliners, such as sea turtles and seabirds, can also take the bait and drown.

Sharks living in the waters around Cocos Island have some protection from the threat: The area is a marine reserve, and the Costa Rican government has barred certain shark-fishing techniques in its territorial waters. But sharks don’t always stay in protected waters; they can move hundreds and even thousands of miles in search of food and mates.

There’s plenty of danger along the way. For instance, long-line fishers leave lines drifting in the ocean for hours, sometimes days, then come back to collect the catch and throw away the dead animals they can’t sell.

Researchers believe such practices have contributed to a 60 percent decline in shark numbers in Costa Rican waters over the last decade. “The biggest problem is the overwhelming impact of international longline fishing fleets,” says Randall Arauz, President of Pretoma, a Costa Rican environmental group. “They fish incessantly in all corners of the world, setting billions of hooks, depleting sharks and anything that takes the bait.”

“Sharks are highly migratory species,” adds Allan Bolanos, Lead Fishery Observer for Pretoma. “They know no boundaries. They spend time in our national waters and migrate through international waters.”

Arauz believes that the best way to restore shark populations in Costa Rican waters is to significantly reduce fishing efforts in the region. “It’s a three step process: close our ports to foreign longline vessels; convince our neighbor countries to do the same; and get the U.N. to ban long-line fishing in international waters of the Eastern Pacific.”

Many fishing groups say such drastic steps aren’t necessary, and that shark populations can take the pressure. They also note that new innovations, such as special hooks, can reduce unwanted “by-catch” on long lines.